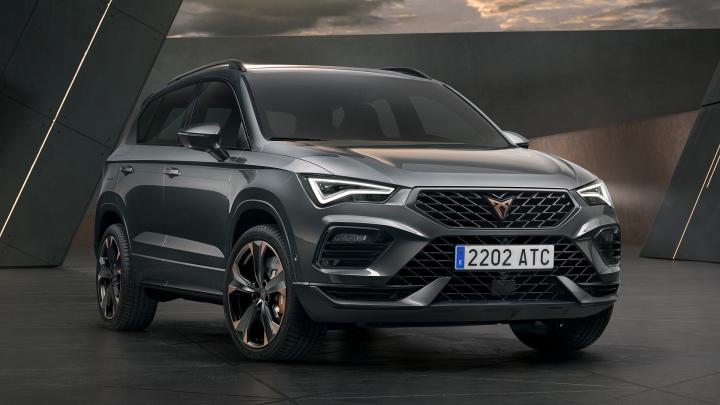 The new CUPRA Ateca for 2020 is faster, has bucket seats as standard, looks meaner and has more technology to play with.

Here she is, the striking new CUPRA Ateca. This is a mid-life facelift, but it feels like CUPRA have upped the stakes here both in design and performance.

Design-wise we can see a much more aggressive front with the lower bumper featuring a similar design to the CUPRA Formentor.

No surprises on the engine front. The new CUPRA Ateca comes with the tried and tested 2.0 litre TSI engine, producing 300PS and 400Nm of torque. This allows the car to reach 0-62 in 4.9 seconds. The top speed is 153mph.

A seven-speed DSG box is standard. In case you didn’t get the memo, DSG boxes are standard on all CUPRA models now and in the future. No more manual CUPRA’s.

The 4Drive system is an updated generation from the previous model. It is integrated into the rear axle and sits at the end of the drive shaft, in front of the rear differential, improving weight distribution and reducing inertia.

The chassis has been tweaked over the previous model so expect a slightly more responsive and controlled feel to the ride.

The steering and throttle response have been tinkered with as well.

As has now also become standard on CUPRA models the CUPRA Ateca comes with four driver profiles. These are “Normal”, “Sport”, “CUPRA” and “individual”, the last one allowing you to configure various settings to your personal preferences.

The steering and throttle response have been tinkered with as well.

As has now also become standard on CUPRA models the CUPRA Ateca comes with four driver profiles. These are “Normal”, “Sport”, “CUPRA” and “individual”, the last one allowing you to configure various settings to your personal preferences.

The rear of the car has new rear full LED lamps with “dynamic” indicators which visually help confirm the intended direction of travel.

A new steering wheel, as seen on the new CUPRA Leon and CUPRA Formentor, features the engine start button and driving profile button with the CUPRA logo.

The digital cockpit is also standard,

The dash features copper and dark aluminium detailing around the vents and touch screen. There are also four illuminated USB C ports, two in the front and two for the rear passengers.

Like the new SEAT Leon, the CUPRA Ateca has an embedded SIM (eSIM),

The built-in eSIM allows connectivity to a dedicated APP were you can do things like lock and unlock doors, find the location of the vehicle and other driving data.

It can also automatically place an emergency call should the vehicle be in an accident.