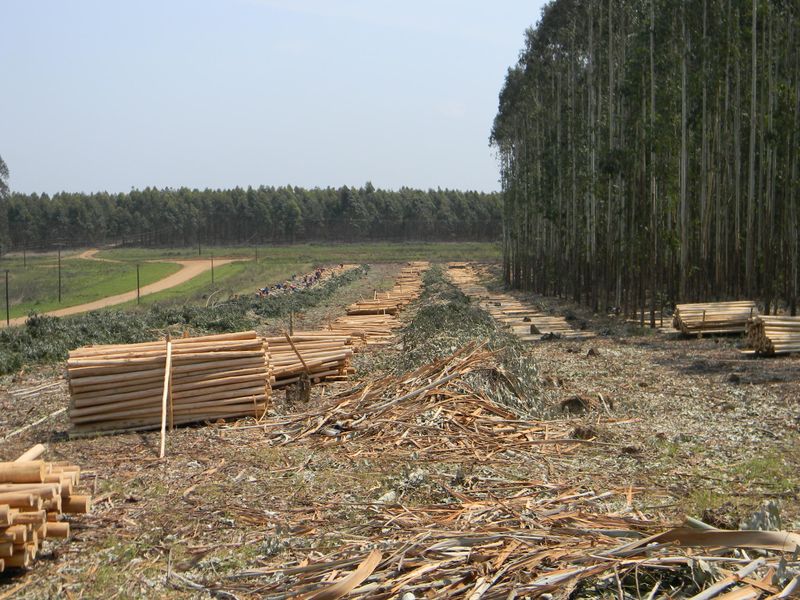 A forest in South Africa is considered to be an area of land dominated by tree species with overlapping canopies, covering at least 75% of the area and very little grass cover or herbaceous ground cover.

They comprise mostly of commercially profitable tree species and cover about 1.2 million hectares which is about 1% of South Africa’s land cover which is a small figure compared to 30% in America and 40% in Russia. Timber plantations in South Africa in general need a minimum of 750mm rain fall per annum to sustain commercial forestry. Three tree genera are grown commercially that is Pine, Eucalyptus and Wattle. Ownership and scale
According to Forestry South Africa statistics, as of 2018, 83% (of 1.2 million hectares) of the timber plantations are privately owned. Of this, 75% were owned by largescale corporates, 21% owned by medium scale timber growers, most of which would be owner-managers and 4% were small-scale timber growers, the majority occurring in traditional authority areas.

The 17% state-owned plantation land is split up between the Department of Agriculture, Forestry and Fisheries (DAFF) and SAFCOL (South Africa Forest Company Limited) through its subsidiary, Komatiland Forests. A small percentage is owned by local municipalities.

South Africa is going through a process of land reform focused on restitution, land tenure reform and land redistribution. As a result, much of farming and forestry land is changing hands which will change future ownership.

The following are categories against which timber plantation ownership can be differentiated according to the South African Forest Assurance Scheme (SAFAS): Corporate (CO): Large plantations with multi-level management structures and corporate ownership. Most corporate plantations are greater than 10 000 ha. Owner manager (OM): These plantations have an owner that is also the manager. These are typically below 10 000 ha in extent. We usually refer to these holdings as timber farms, but they may also be mixed farming operations. Family Forestry (FF): These are owner manager operations where all the work is done by family members. These are typically small-scale forestry operations on traditional authority land and range between 1 – 100 hectares in extent. Traditional Authority (TA): These are communal areas, where land rights are accorded to people by the local traditional authorities and where specific legislation is in place to protect informal land rights. TA timber woodlots are usually between 1-3 hectares.  Main commercial tree specie
There are three main Pine specie grown in South Africa. These include Pinus patula (Jelecote pine indigenous to Mexico), Pinus taeda (loblolly Pine – indigenous to USA) and Pinus elliotti (Slash pine – indigenous to USA). The growth cycle or rotation age for most commercial pine ranges between 20-25 years. The mature timber sawn into structural timber for construction purposes. Timber from thinning’s (which takes place at year 8) is used for the manufacturing of pulp, boxes, pallets and crates.

High quality logs, that is logs without knots are used for veneer and furniture. There several Eucalyptus (indigenous to Australia) varieties grown commercially in South Africa and managed depending on their end use. The commonly grown species include grandis, (Blue gum), smithii, dunnii, camaldulensis, nitens and several clone varieties including Grandis x Urophylla (GU’s), Grandis x Camaldulensis (GC’s) and Grandis x Nitens (GN’s). Eucalyptus trees are harvested at between 7 -10 years and used for the manufacturing of pulpwood, mining timber, pallets, crates, treated fencing poles, house construction and furniture.
With regards to the Wattle (indigenous to Australia) there is one dominant variety grown that is Acacia mearnsii (Black wattle). Wattle yields two main products that is timber and its bark. The specie is harvested at 10 years and the timber is used for the manufacturing of pulpwood and mining. A chemical know as Tannin is extracted from the bark. Tannin is used in the preservation and treatment of leather products and in the manufacturing of shoe polish.
The plantation management objectives of the forestry industry 1.2 million hectares according to Forestry South Africa statistics include; management for pulpwood -56.6%, saw logs -37%, poles-2.6%, mining timber 2.3% and other timber products -0.8% Forest LegislationCommercial plantations in South Africa are established in accordance with;

So, the legal requirement to grow commercial timber is a water use license which is obtained from the Department of Water and Sanitation whose criteria ensures that environmental, agricultural, heritage standards and requirements are met. Afforestation is nearing the ceiling in South Africa. However, there is about 70 000-100 000 hectares still available in the Eastern Cape province for establishing new plantations. Other legislation governing the timber industry include the National Forest Act 1998 (Act 84 of 1998) which makes provision for the sustainable forest management, explains how communities can use forests sustainably and sets out rules for protecting indigenous forests and ensuring access to State-forest land for recreational, cultural, spiritual and educational purposes.

Another important legislation includes the National Veld and Forest Fire Act (NVFFA) 1998 (act 101 of 1998) whose purpose is to prevent and combat forest and mountain fires by placing individual duty on every land owner to take minimum precautions to prevent and combat fires through voluntary formation of fire prevention associations (FPA’s). Economics
According to Forest South Africa a non-profit organisation which represents the interests of timber growers, about 40% of the annual timber production is exported. The forestry industry contributes a small percentage to the overall Gross Domestic Product (GDP) of the country, the average for the past 10-20 years being 1.2% -1.48% respectively.

With regards to employment statistics, according to the Department of Agriculture, Forestry and Fisheries (DAFF), the Forestry sector in 2019 employed 165 000 workers and also provides 92 000 indirect (pulp mills, sawmills, mining timber and other) jobs. Forestry livelihoods support about 652 000 people mainly from the rural population where timber plantations are situated.

The Pulp and Paper industry provides about 24 000 employment opportunities and the Sawmilling industry employing 26 000 people. Silviculture and Harvesting systems and equipment
Most timber plantations in South Africa are managed according to an even age policy and clear-felling regime once the timber reaches maturity age. Land preparation includes the burning of brushwood (harvesting residue) to allow easy access to planting stations (pits) by planting labour. Some corporates due to environmental and risk reasons have moved away from the practise of burning brushwood and replaced it with mechanical mulching. Land clearing is then followed up by the marking and pitting of the planting stations which is either done manually using road picks or mechanically by tractor drawn riper or mechanical augers.

Tree planting is mainly done by hand with water (puddle planting) or a water retainer agent/powder commonly known as a planting gel is poured into the planting station ahead of inserting the seedling. Water and planting hydrogel are supplied infield by tractor drawn tankers with water pumps for distribution infield.
Felling and conversion operations are performed on different technological levels. These vary from basic level where manual labour with basic hand tools is predominant to highly mechanised with specialised equipment. The most dominate felling method is the motor-manual felling where chainsaws are widely used for clear felling and thinning operations mostly in conjunction with skidders or tractor-trailer combinations.

Felling machines are rapidly becoming the standard equipment in many harvesting operations in South Africa. There are two primary choices at hand: a machine that only fells trees – a feller buncher or a multi-functional machine – a harvester which fells trees, debarks, cross cuts to length and stacks. A forwarder is used to cart the timber to the depot where the timber is loaded onto 30-ton rigs/truck by a teleloger bound to a sawmill, pole treatment plant or pulpwood plants. Challenges and Opportunities
We are living in an ever-changing world with rapidly evolving political dynamics, technology driven, globalisation, competitiveness, resource scarcity, sustainability and ever-evolving product standards among other factors is equally challenging.

The South African Forest Industry has to contend with these factors on an ever-changing scale and almost daily basis demanding new technologies, new thinking, new approaches, enterprise and innovativeness.

The past experience with fires and the establishment of many new pest and diseases hitherto not seen in South Africa has meant refocussing on forest protection as one of its key priorities. The changing ownership dynamic through government driven Land Reform and Restitution programme means that corporate foresters will require new social/extension skills to engage with the new community lead ownership.

The new owners will also require relevant technical and business skills through training, mentor-ship and appropriate research. The high rate of HIV/AIDS compounded by low productivity labour rates and low contractor rates over the past decade has led to the exploration of mechanised forest operations.

With mechanisation leaving many foresters and rural communities with mixed feelings in the sense that it is viewed as a double-edged sword; mechanisation improves quality and productivity but on the other hand results in the laying off of workers whose jobs would have been made redundant.

This is a bitter-sweet deal in a country with very high unemployment rate particularly in the rural areas. The most recent challenge being the Corona-virus whose impact resulted in the shutdown of the economy for 6-months and the Force Majeure clauses on timber supply contracts being evoked by the local timber markets. This left many timber farmers without income and resulted in the laying off of labour. Thus increasing other social ills such as poverty and inequality.
The 100 000 uncharted hectares available in the Eastern Cape Province presents new afforestation opportunities for the forestry investor. However, the investing entity still has to comply with the government EIA (Environmental Impact Assessment) procedures and also negotiate with the local rural communities for the land and labour.

The list of challenges and opportunities is endless; as an industry we are living in a new dimension and have to adapt. The extensive experience, resourcefulness and ability to succeed under harsh conditions of our local foresters means there is no reason why we cannot survive and prosper.

Justin Nyakudanga
Justin was born and bred in Zimbabwe but now permanently resides in South Africa with his wife and two children. He is a great fan of Liverpool FC – ‘you’ll never walk alone’.

Justin holds a Bachelor’s degree in Technology- Forestry and a Post Graduate Diploma in Business management. He has 20 years experience of Commercial and Extension/Community Forestry.

As a self employed Forestry Consultant he deals with small holdings and community timber farms. Previously he has worked for Hunyani Forests back in Zimbabwe and Sappi Forests in South Africa.

First published in the December 2020 issue of Forest Machine Magazine

Forest Machine Magazine is a dedicated forestry news channel. It is written and edited by a forest professional with over 40 years hands on experience. We are dedicated to keeping you informed with all the latest news, views and reviews from our industry.

A Brief History Of Agrip