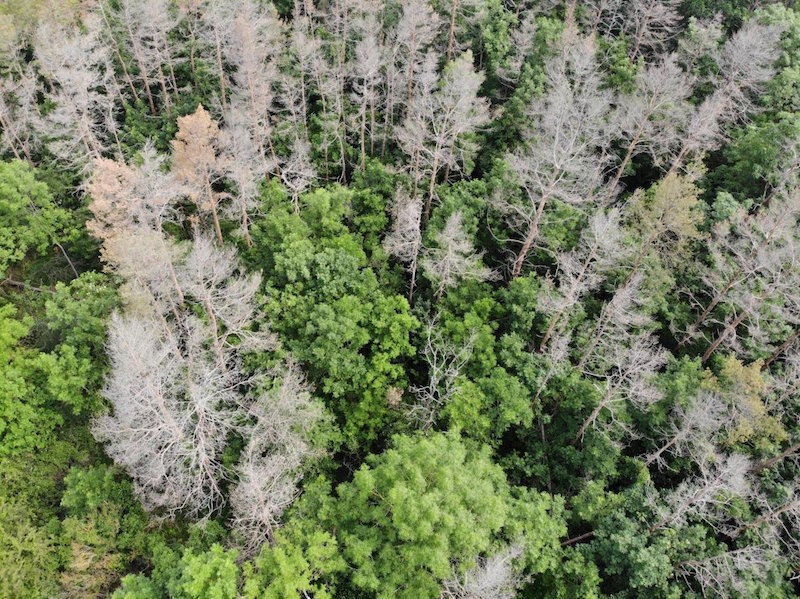 In recent years, European forests have suffered greatly from extreme climate conditions and their impacts. More than half of Europe’s forests are potentially at risk from windthrow, forest fire, insect attacks or a combination of these. This is the main result of a study by an international team of scientists with the participation of Henrik Hartmann from the Max Planck Institute for Biogeochemistry in Jena, Germany. Using satellite data and artificial intelligence, the scientists studied vulnerability to disturbances in the period between 1979 and 2018. In the light of ongoing climate change, their findings are very important for improving mitigation and adaptation strategies as well as forest management to make European forests more resilient for the future.

Forests cover a good third of Europe’s land mass, play an important role in regulating the climate, and provide a wide range of ecosystem services to humans. However, in recent decades climate change has made forests increasingly vulnerable to disturbances. Forest structure and prevailing climate largely determine how vulnerable forests are to perturbations and vulnerability to insect infestations has increased notably in recent decades; especially in northern Europe. The boreal coniferous forests in cold regions and the dry forests of Iberian Peninsula are among the most fragile ecosystems.

Henrik Hartmann, research group leader at the Max Planck Institute for Biogeochemistry, observes forest responses from an ecophysiological perspective and sums up “The experience of recent years, especially since 2018, has clearly shown that the threat to forests posed by insect pests has particularly increased with ongoing climate change. There is a risk that further climate warming will increase this trend.”

Extreme weather conditions such as heat waves and drought weaken trees and make them vulnerable to insect pests. “This finding is not new, and forests are normally well adapted to deal with occasional climate extremes. The fact that these extremes are now occurring so frequently and repeatedly makes the exception the norm, and forests cannot cope with that situation,” the expert explains.

The study also shows that large and old trees are particularly vulnerable to climatic extremes. In recent drought years, this has also been observed in Central European beech forests, where an increasing number of old trees suddenly died. “This is because their water transportation system has to work under greater stress to transport water from the soil through the roots and up into the high-up crown. As a result, large trees suffer more from drought and are then more susceptible to disease.”

Large and older trees are also preferred hosts for harmful insects. For example, the European spruce bark beetle, which mainly attacks adult spruce trees, prefers to fly to larger individuals. In addition, large trees also provide a greater area for wind attacks during storm events. “The results of the study are conclusive from both an ecological and an ecophysiological perspective,” summarizes Henrik Hartmann.

Existing European forests will not necessarily disappear, but many of them could be severely damaged by anticipated climate change-induced disturbances and important ecosystem services could be impaired by the loss of especially large and old trees.