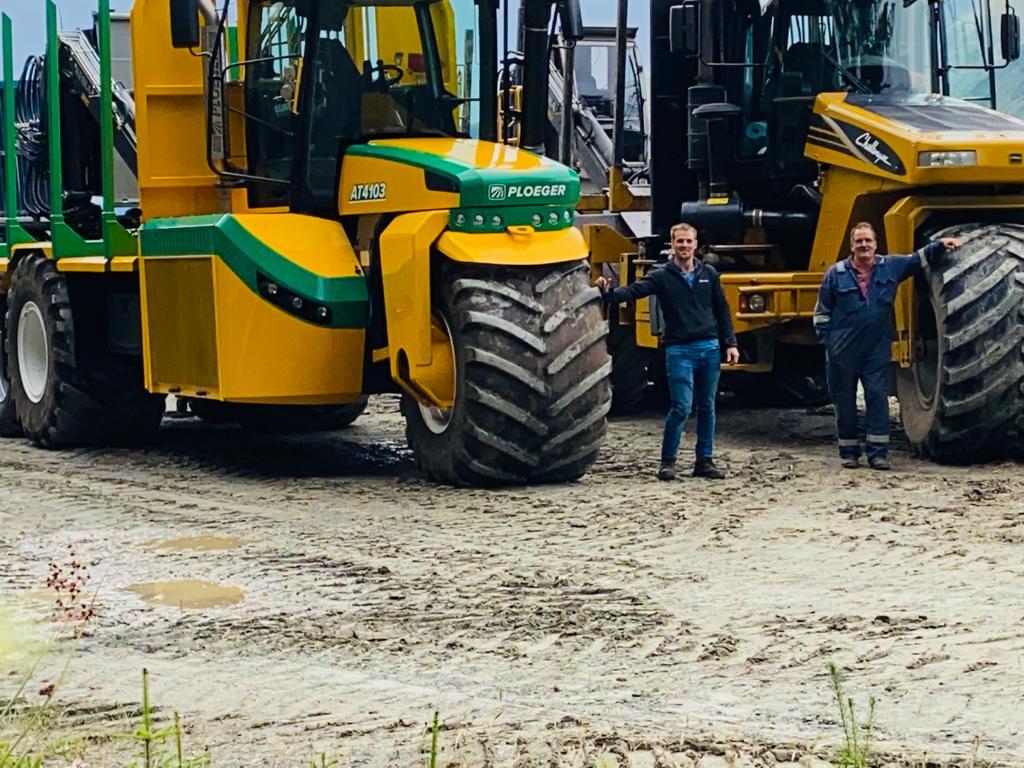 Howie Forestry Solutions is a newly formed company run by director Adam Howie with assistance from his father Ian. Both are delighted to announce they have been appointed the official Kesla Oy dealers for Scotland.

From their base near Tarbolton in Ayrshire, Howie Forestry Solutions (HFS) will offer customers access to the full range of Kesla forestry products, supply spare parts, carry out a fitting and repair service at their fully equipped workshop, and visit customers for on-site repairs with their two mobile service vehicles and experienced field engineers.

When the previous dealers, Jim and Lorna Watt of Caledonian Forestry Services (CFS), retired, there was always going to be huge pressure on the new organisation; however, no one is in a better position to take Kesla forward than a long-standing customer with their own bespoke engineering department.

Ian Howie started out in the early 1980s as an agricultural and forestry contractor trading as Ian Howie Forestry. Given his preference for forestry work, in 2006 he had the the idea of using an agricultural tractor, along with a low ground pressure (LGP) trailer, for transporting round timber from harvesting sites to stacking areas near main roads. This would help reduce the damage being caused to the forest roads as well as excessive wear and tear to the articulated or wagon and drag configuration of lorries being used.

My first meeting with Ian took place when he was in Aberfoyle for a short time, with his tractor and trailer, helping to keep timber moving while the Road Train was undergoing repairs. This was Ian’s first experience of using Kesla cranes and he was happy with performance, strength and reliability.

The LGP trailers have multiple axles with wheels positioned across the full width, meaning the forest road was rolled evenly. This prevented any rutting of the forest road when carrying much heavier loads –sometimes up to 50 tonnes–and eliminated any damage to narrow tarmac roads. Although using this system incurred additional haulage costs, it offered a substantial saving regarding the upkeep and repairs of forest and minor B roads.

Ian has always been eager to identify equipment that will fit in with the services they offer and thought that the TerraGator would be ideal. The trike design, with a large, wide front wheel and wide rear wheels, would help to spread the weight distribution of the drive unit. Moreover, a Kesla 2012T crane and timber bunks could be fitted to increase the overall carrying capacity. It also had plenty of engine power for towing the LGP trailer, a good road speed and excellent braking.

Ian approached TerraGator (who incidentally were not keen) and Jim at CFS to see if the project would be feasible. Despite being a radical concept for LGP transport, it was hugely successful.

While Ian was building up the LGP haulage side of the business Adam served his mechanical engineering apprenticeship at a local agricultural dealer. After successfully completing his training he spent a year overseas working on agricultural contracts in America, eventually joining his father in the business in 2013.

The five LGP units, two wagon and drags, two tractor trailer units, and the TerraGator kept Adam very busy with servicing and repairs as the company
worked on contracts throughout Scotland.

Reliable engineers are the backbone of any industry that uses mechanical equipment; downtime can make or break a contractor and Adam understands the importance of keeping the equipment well maintained and in top class condition from the outset.

When Adam is caught up with servicing schedules and equipment is behaving, he takes to the workshop to work on special projects. In fact, he designed and manufactured the company’s own LGP trailers and fabricated bespoke frames with hydraulic stabilising legs on their tractors to attach the Kesla cranes. They have experienced no issues with the Kesla cranes, which were used on all their LGPs, and wouldn’t consider using any other brand.

With the company’s huge workload, Adam often had to help out with the driving to meet deadlines:“We were that busy keeping on top of all of our contracts and I was flat out between servicing/repairs and driving that sleep was sometimes a luxury,” laughs Adam.

2016 saw a big slowdown in forestry with sawmills restricting the supply of timber. Those in the industry accept that this happens from time to time and generally the slowdowns are just a temporary glitch. With less timber to move, HFS downsized to running just three LGP’s and Adam found himself with a bit more time on his hands.

Ian and Adam began looking for an alternative to the TerraGator as, despite still being an effective workhorse, its working hours were starting to add up and Agco were about to cease production. A CLASS Xerion Saddle Trac was decided upon as it ticked a lot of the right boxes for Adam. In particular, it would be extremely manoeuvrable with twin steering axles, good load capacity, 50km/hr road speed, and a 435hp Mercedes Benz engine with a continuously variable ZF Eccom transmission.
Although it had wide tyres, Adam envisioned a method of fitting extra axles which could be raised when travelling empty and lowered to further reduce ground pressure.

I saw this not long after it had been completed as we had organised a sightseeing tour of Scotland with some forestry visits for 30 Finnish timber hauliers. Adam took us to where his father Ian was extracting timber and Jari Palojarvi, the organiser, said that this was the highlight of the trip as they had never seen anything quite like the CLAAS before. There was a real buzz in the air as the group inspected every millimetre of the vehicle and trailer.

It is certainly testament to Adam’s ingenuity and engineering skills that he impressed 30 experienced members of The Association of the Forest Industry Road Carriers so much that they were still discussing his creation the following day.

The past year has seen the timber markets busier than ever and HFS are currently using six LGP trailers. Indeed, in the 15 years they have been using Kesla cranes they have only ever experienced one issue – a cracked slew pod which was easily replaced. The Kesla cranes used by HFS work much harder than cranes used by timber hauliers; they move a lot more timber each day given their ability to carry much larger volumes and transport multiple loads due to the shorter driving distances.

I visited Adam at his workshop and I was amazed by the size of the premises. A short distance off the A77, the premises are easily visible from the B730. Access is superb with a wide tarmac drive leading to the well-equipped workshop with plenty of room to work on four articulated trailers at once.

Adjoining the workshop is the spare parts department which will offer a good selection of spares, accessories, oils and grease; here, there is also a hydraulic hose making facility where anyone looking for a replacement hose can call in. Opposite their workshop is the engineering department, which covers profile cutting and intricate engineering projects. To the rear of the workshops is a large secure parking area with enough room for a fleet of Lorries.

Adam will be offering a full Kesla installation, servicing and repair service, supplying and installing timber superstructures and bunks for logging trucks. He will also be the UK distributor and installer for a new, innovative auto-lube greasing system for cranes – which will feature in our December issue.

In addition, he will be offering a bespoke fabrication service working with customers and using CAD designs to bring their engineering ideas to life, as well as carrying out LOLER testing at his workshop.

HFS have two service vehicles for carrying out on-site repairs whenever needed and one or more engineers available at the premises for customers who drop in.

I have known Adam for some time and he is a hardworking, well-respected, honest, and driven young man who understands what is needed to succeed in forestry.

On the LGP timber side of the business they have almost no turnover of staff and have a reputation as good employers who appreciate the individuals working for them.

Having worked alongside Ian and Adam, I would have no reservations whatsoever about recommending HFS and the equipment and services they will be offering.