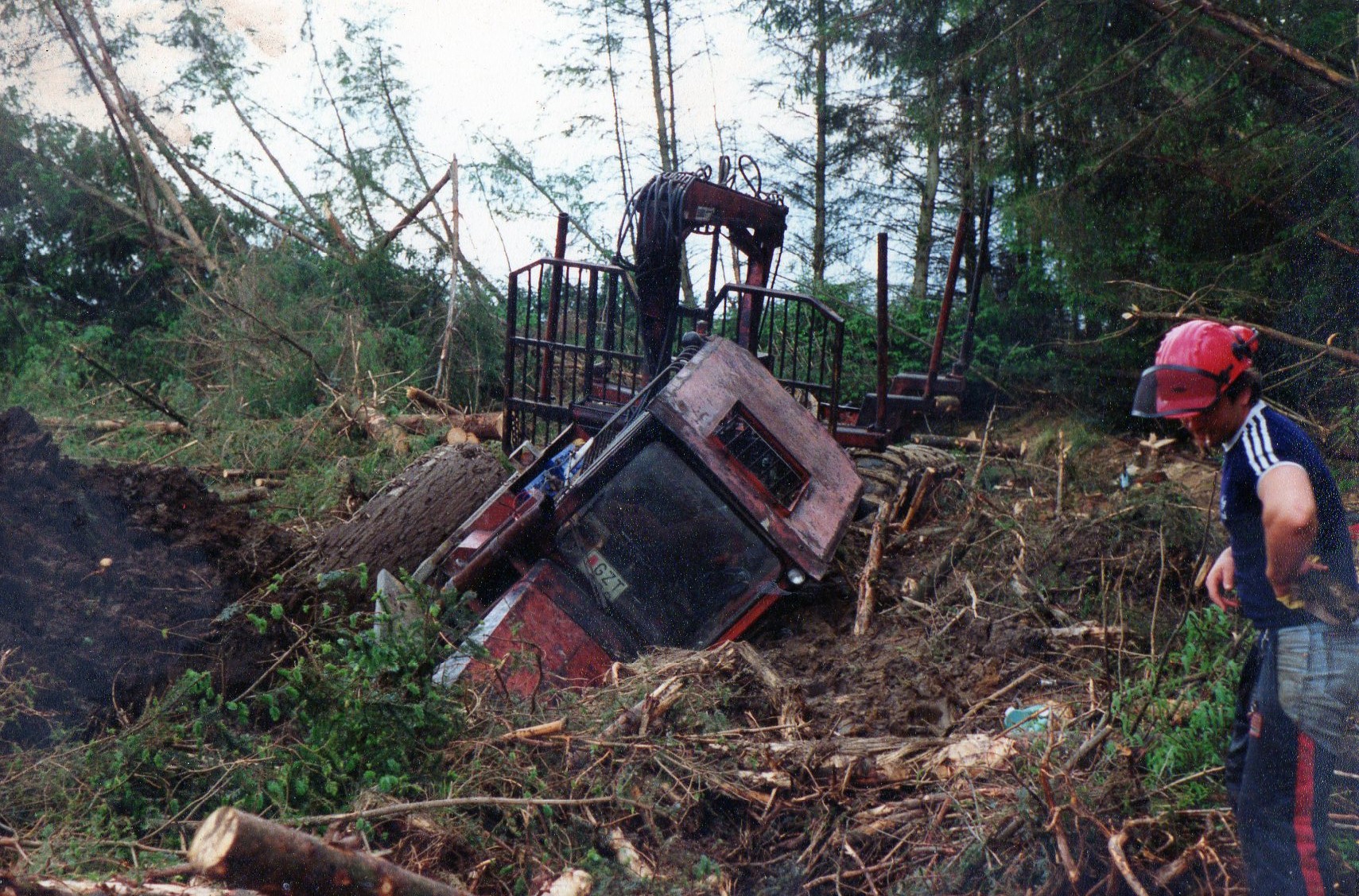 In 1986 I successfully tendered for a harvesting contract in North West Wales from the Forestry Commission. It was a flat, wet, peaty windblown site with over 3000m³ of .05m³ Sitka spruce which was very poor quality, but at £17 per tonne it didn’t matter to me as I felt I was well on my way to becoming a millionaire.

Now all I needed was a suitable machine for extracting the timber to roadside, so after a few phone calls and visits to dealers I was now the proud owner of a County with an Atlas loader mounted on the back axle and a hired forwarder trailer.

Once all my equipment was delivered one or two problems I had not allowed for cropped up; the first stumbling block was that my loader didn’t reach the back bunk of the trailer – we were cutting 2m pulp and 1.85m pallet wood – but this was a minor setback for an enthusiastic contractor like me. The second setback was slightly more serious: the County was well out of its comfort zone on deep furrowed soft peaty ground and was completely wrong for the conditions.

Despite this we were able to work some of the timber that was close to roadside and I also had a good firewood market, which let me keep up to date with bills and wages while I worked on plan B. Having realised a second-hand purpose built forwarder was the way forward, this is when I made one of the biggest mistakes of my life. I was looking at three machines, a 578 Bruunett, a Lokomo 909 and a Kockums 850 and anyone with half a brain would have picked one of the first two.

Unfortunately for me however, Tim Mallion from Forest Machine Imports was extremely persuasive and, bowing down to his wealth of forestry experience and the fact he went to school with Prince Charles, the Kockums was the perfect choice. I must add that up to this point in my life I was a pretty level headed guy who slept well and could deal with problems in a rational way, but all this was now about to change forever.

My £12,000+vat Kockums arrived from Sweden complete with band tracks and wheel chains. Although we had to add two extra bolsters to cope with the short wood sizes in the UK, I was raring to go and get huge quantities of wood piled up at roadside.

To begin with I hand cut all the wood myself alongside Elvie Parry and a procession of wanabee plastic lumberjacks who would come and go as the mood took them. Back then there was no health and safety or laws regarding chainsaws; you bought a saw and off you went to the forest. In retrospect it’s amazing there were so few accidents and fatalities – anyone who worked on my site had to have chainsaw trousers or chaps, helmet and gloves but a lot of other contractors didn’t bother. The only officials who appeared on site were people from the DHSS checking that nobody was claiming benefits and the Forestry Commission forester every few weeks for a stock take.

If I could achieve over 100m³ per week on a regular basis, I was well on the way to being a successful forestry contractor.

The first couple of weeks went by with good output and no major issues but from week three onwards it was a different story altogether. A wheel bearing in the back bogie collapsed and consequently I realised I had a Kockums with serious health issues as it would self harm at every opportunity. It was also too heavy for the ground conditions, but as I was now committed with finance payments I had no option but to persevere and with the help of a good bank manager I managed to struggle on.

Every day brought new challenges and more repair bills, bearings, transmission rebuilds, starter motors, or batteries. Our efforts to keep it going were constant but the biggest hurdle came when I was bogged and we attempted to get it out using a Tirfor hand winch operated by Elvie.

While trying to-bog the forwarder an oil pipe to the engine split which neither of us noticed until the engine developed a horrible load knocking sound. I immediately stopped the engine but it was too late, the damage was done. I was now faced with a bogged forwarder with a knackered engine on a swamp which was a breeding ground for adders and midges. Admittedly I am not religious, but at this point I began to wonder if there was something to it and what I had done to really annoy him.

The next day we came up with a plan to build a wigwam structure each side of the front of the forwarder connected by a steel pole with a block and tackle to remove the engine. The process started well but, as soon as our wigwam construction took the weight, instead of the engine rising out of the forwarder our wigwams sunk down into the peat. We then came up with the idea of lashing poles around the base of the wigwams to prevent them sinking and this solved the problem.

We were not out of the woods yet, so to speak: we had to get the engine 500m across a wet clear-fall site and onto the back of my transit pick-up. A couple of guys with diggers had come up to have a look at retrieving the engine but were not interested due to the wet ground conditions.

In the end the solution was staring us in the face as the Kockums had a large belly pan and we had the five tonne Tirfor hand winch, so after getting the engine lashed on to the belly pan and the winch set up Elvie and me set off to my father’s house for some planks of wood to skid it out easier. It took us a full day to get the engine out and onto the back of my transit.

After it had been re-built the engine was returned and we had to reverse the whole process for re-assembly into the forwarder. We were then able to de-bog the forwarder, however this was a lengthy process after being there almost a fortnight.

Thankfully, I was then back to the usual breakdowns that only took one or two days to fix between getting out the odd forwarder load of wood.