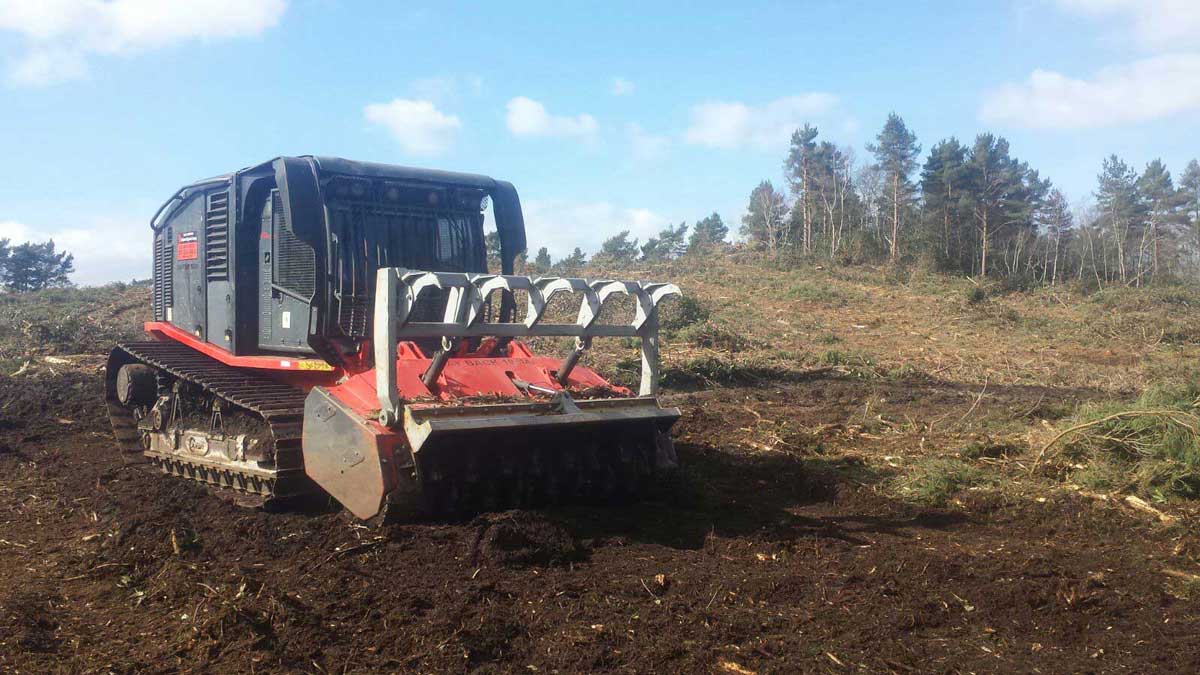 I have been trying to catch up with Justin from Kingwell Holdings, for a while in order to discover a bit more about the mulching/bio-mass recovery/ground preparation side of the industry.

Although I got the opportunity to catch up with him in April, it involved travelling to a site below Bristol which even on Google maps looked a fair old trek. On investigation, EasyJet had daily flights from Glasgow at a very reasonable cost so I decided that it would be the perfect option. I promptly got in touch with Justin to make arrangements for a time and date.

I arrived late afternoon in Bristol and all I had to do was get a taxi to the Plume of Feathers in Rickford, near Blagdon, and meet up with Justin that evening. On arrival at the hotel I realised that the Bristol airport taxis operate a similar policy to the airlines; my fare must have been for the first class section of the taxi with extra legroom, excess baggage and priority boarding. My flight was just over £40 from Glasgow to Bristol, so how can they justify £18 for a 10-minute taxi ride? He even had the audacity to look down his nose at me when I demanded my £2 change.

I met Justin that evening over a great meal in the hotel and got to bed at a reasonable time in preparation for an early start. We set off nice and early in the morning as the mulching location was roughly two hours away.

During the journey, I got the opportunity to learn a little more about Justin and Kingwell Holdings Ltd. Justin began his forestry career in 1986 and formed Kingwell Trees Ltd in 1987, initially focusing on climbing and felling trees. He soon progressed into stump grinding and site clearance and Kingwell Trees Ltd. developed into Kingwell Holdings Ltd. Along the way he has built an impressive list of satisfied clients due to the excellent quality of his work and his “can do” attitude.

Justin has an impressive range of equipment for forestry and vegetation management: tracked mulchers from 400 to over 600hp able to cope with extreme sites and fitted with self-recovery winches, a selection of specialist forestry excavators and attachments, tracked slow-speed shredders, mobile incinerators, a Deere 1410 8×8 forwarder and excavator and mulcher mounted stump grinders up to 440hp. He also has some pretty special machines in the pipeline, there will be more on those in later editions of the magazine.

During my visit Justin was mulching for Wessex Woodlands using his Prinoth Raptor 500, which he imported himself from the USA. It was a much bigger machine than I imagined and was fitted with a Caterpillar six cylinder engine. The engine was due to be re-mapped by the Kingwell engineers to increase the horsepower to over 600hp, as Justin finds they use a bit more fuel but can substantially increase productivity by up to 30%. This model is capable of mulching ¾ ha to 1.5 ha per day (large debris left in the brash mat and bigger remaining tree stumps can impede progress).

The tracks had some large grousers, not dissimilar to a Tigercat, and could handle up to 45° forward slopes and 30° side slopes.

When looking over the mulcher there appeared to have been some recent fabrication and other changes, which I thought was strange for a 2013 machine with only 2,200 hours. I found out that when Justin buys a mulcher or other equipment, new or used, he adds some of his own (top secret) modifications which improve performance, quality of the finish and offer better protection.

It was good to be able to get a good look around the machine, but I was looking forward to seeing how well it would perform on the uneven pine clearfell. Justin’s operator, Darren Beaney, noticed some hydraulic oil under the front of the machine. He placed some spill mats on the oil and investigated the source of the leak.

Having removed the belly pan and failing to identify the leak, he decided to raise the cab to inspect it from above. Lifting the cab is no easy feat on your own it is necessary to first unbolt and remove the outer mesh from the door and opposite side before raising the outer guard, which protects the front magard window and cabin, via the hand operated hydraulic pump. He then had to switch over the pump to raise the cabin forwards over the mulching head which gave excellent access (it looked a pretty good machine to work on, with all components reasonably easy to get to).

I was able to examine a lot more of the machine than I had first bargained for, but I have to admit to enjoying myself on the tools in the nice sunny weather with no midges.

The leak itself proved to be a pain as, although the damp area was visible, there was no obvious leak and our first suspicions of a lifting ram fitting were wrong. I saw there was a start-stop on the side of the engine but unfortunately the ignition was off, so we had to lower the cab to switch it on and then raise it again.

By starting the engine, we saw the leak was a 90° fitting under the pump for a pressure test port. Darren tried to tighten it and of course it snapped off completely and we didn’t have a spare. Luckily, the pump for lifting the cab had the same fittings so after discussing the issue (I was now enjoying being accepted as part of the team and not treated like a journalist, as I was proving to be more of a help than a hindrance) we decided to lower the cab and guard to use the fitting as a temporary repair.

Darren explained that Justin’s machines are looked after meticulously by their two mobile mechanics, Ruairy and Paul. They have both completed the full technician course at the AHWI factory. Service intervals and any breakdowns are logged in the office; only the best oils and grease are used, and the used oil is tested for contamination after all servicing.

This worked a treat and we re-fitted all the guards and were able to “go mulching”.

The area to be mulched was previously 100% pine and looking at the stumps it would have been averaging around a 0.3m³ tree size. Although fairly uneven, the ground was quite firm with some large debris in the brash mat and some meaty tree stumps – I was looking forward to seeing how the Raptor coped.

Another point worth mentioning is that good mulcher operators are very hard to find and to mulch efficiently without causing unnecessary stress on the equipment requires a high level of skill. When looking out of the front window, your vision of the mulching head is somewhat restricted due to the protective guards; this is where a skilled operator comes into his own by developing “a feel” for the equipment.

There is a vast difference between a machine driver and machine operator, because an operator understands the limitations of his machine, how to look after it and how to get the best performance from it. Darren, who has worked with Justin since 2002, certainly fits into this category.

The Raptor sounded superb when it was working hard and the stumps, brash and debris disappeared to leave an amazing finish which will rot down quickly to supply nutrients for the next crop of trees. The tree planters must love working on the mulched ground; apart from the occasional drain to cross there are very few trip hazards and the planting conditions are easy, which must seriously speed up their production.

We spent a few hours watching Darren and it was amazing how quickly he was able to cover the ground. I got the chance to sit inside with Darren and was surprised at the low noise levels and lack of vibration in the cab.

Only during use does it become evident that proper maintenance and regular checking for loose bolts is imperative to the reliability of the machine.

Another important factor I learned is that mulching is seasonal, normally from October to March (I was lucky that this site was still to be completed); this effectively the machines are only in operation for five months per year. Now I understood why maintenance and reliability are so important because with such a short season any length of downtime would be a disaster.

Justin’s employees switch over to ecology work during the summer months: fencing, stump grinding, tree surgery, etc. This allows him to keep his workers employed all year.

It was great to meet Justin as he is a real down to earth, no nonsense, honest and hard-working guy and he is quick to point out that to be successful you need a loyal, skilled workforce and very understanding partner.

I thoroughly enjoyed my visit, Justin was very open about his business and he was great fun to be with. I am looking forward to his next developments, as it will give me an excuse to spend more time with him. 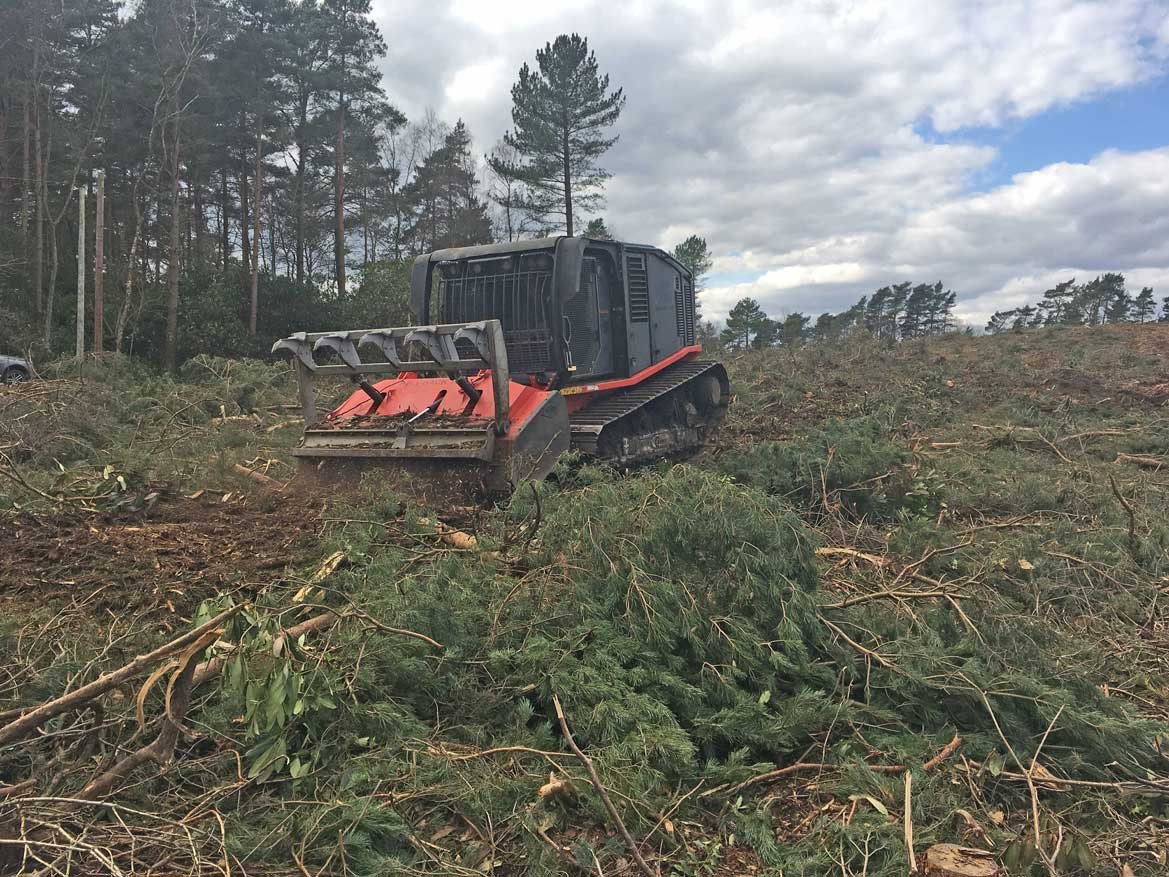 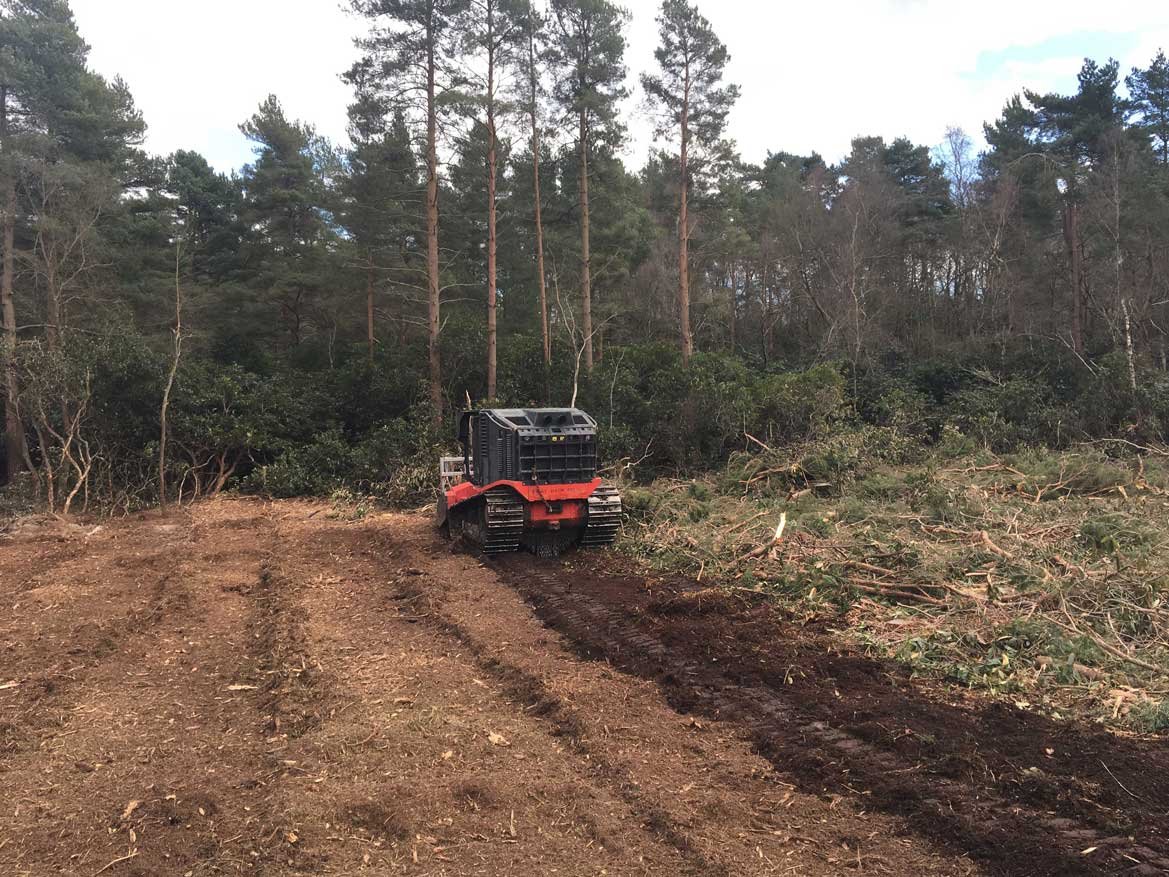 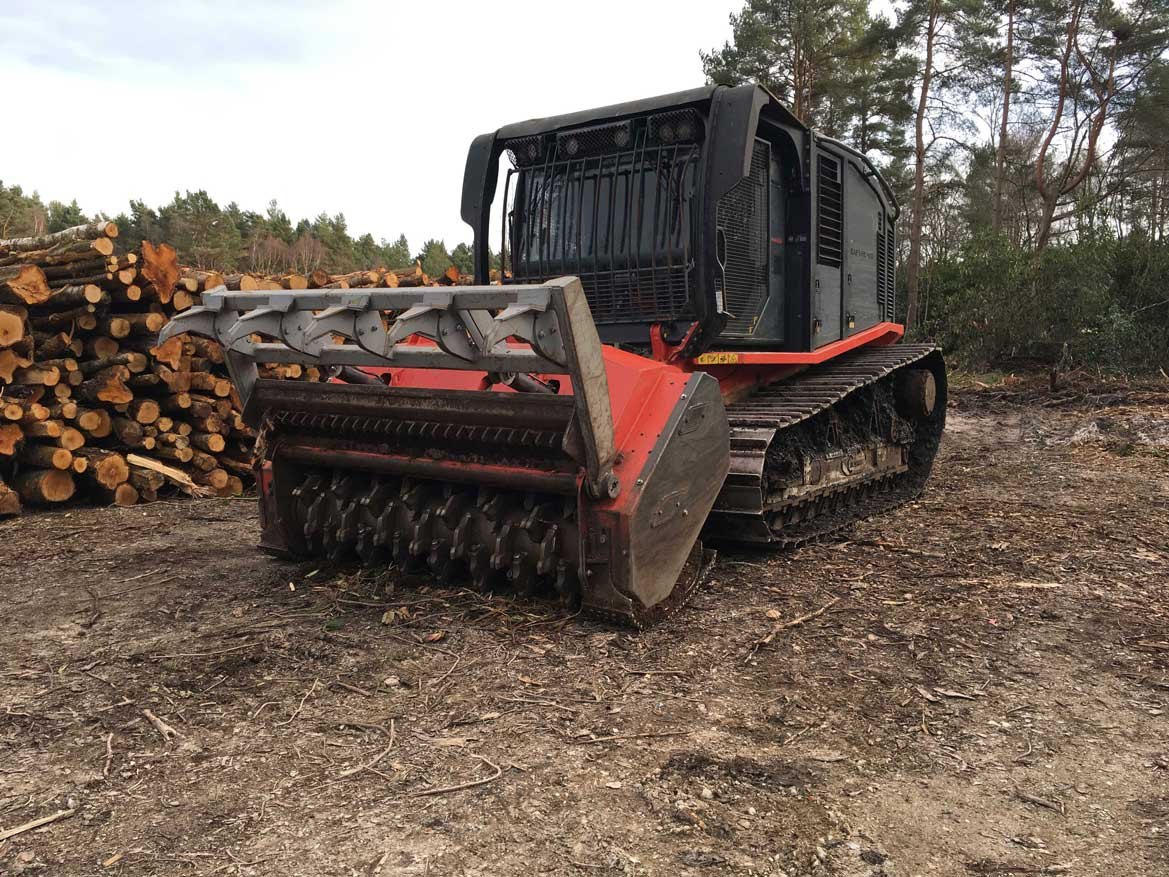 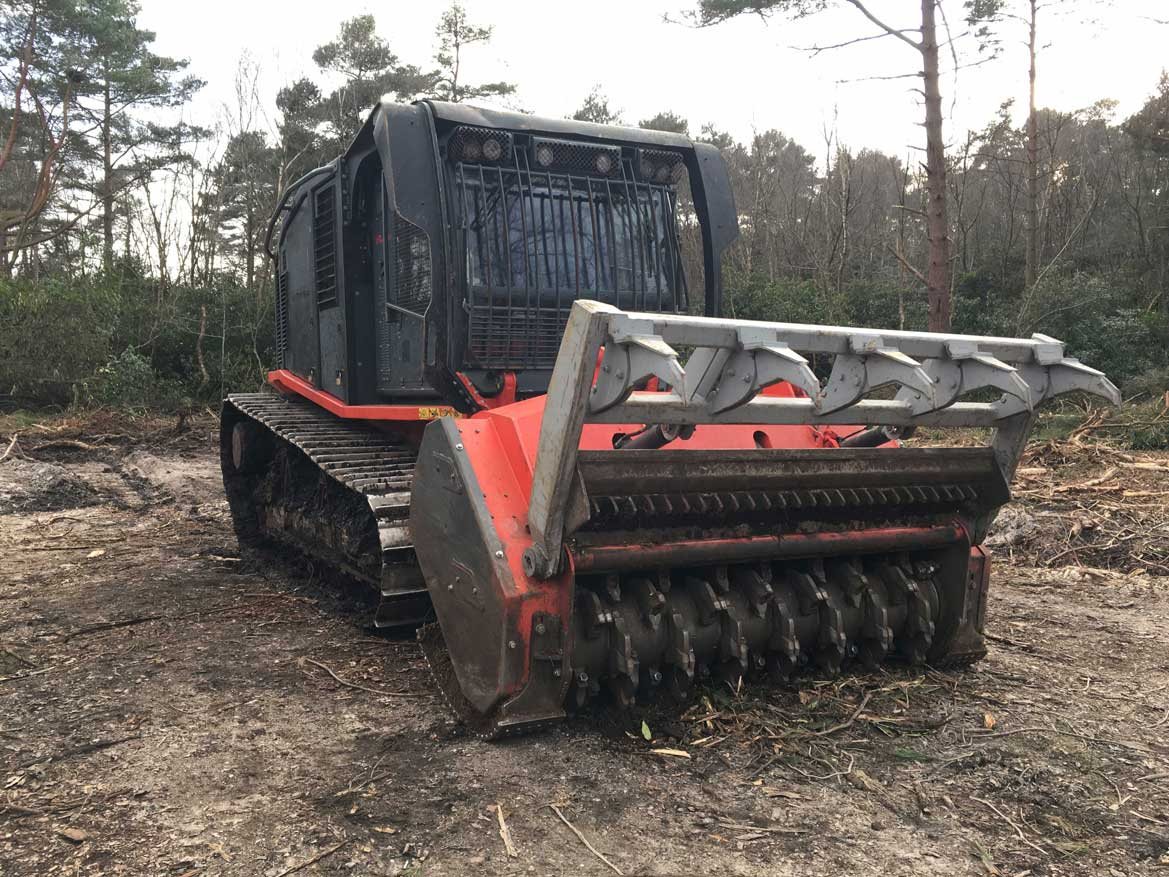 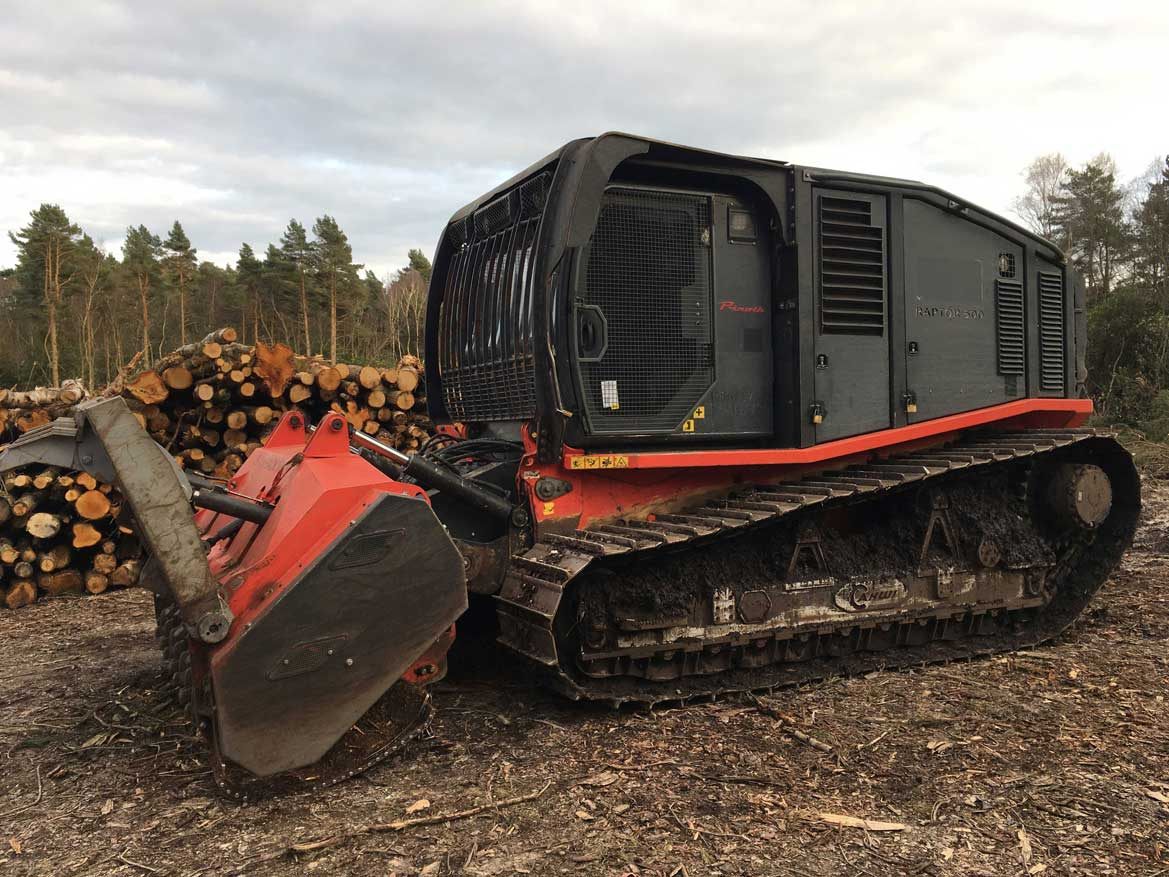 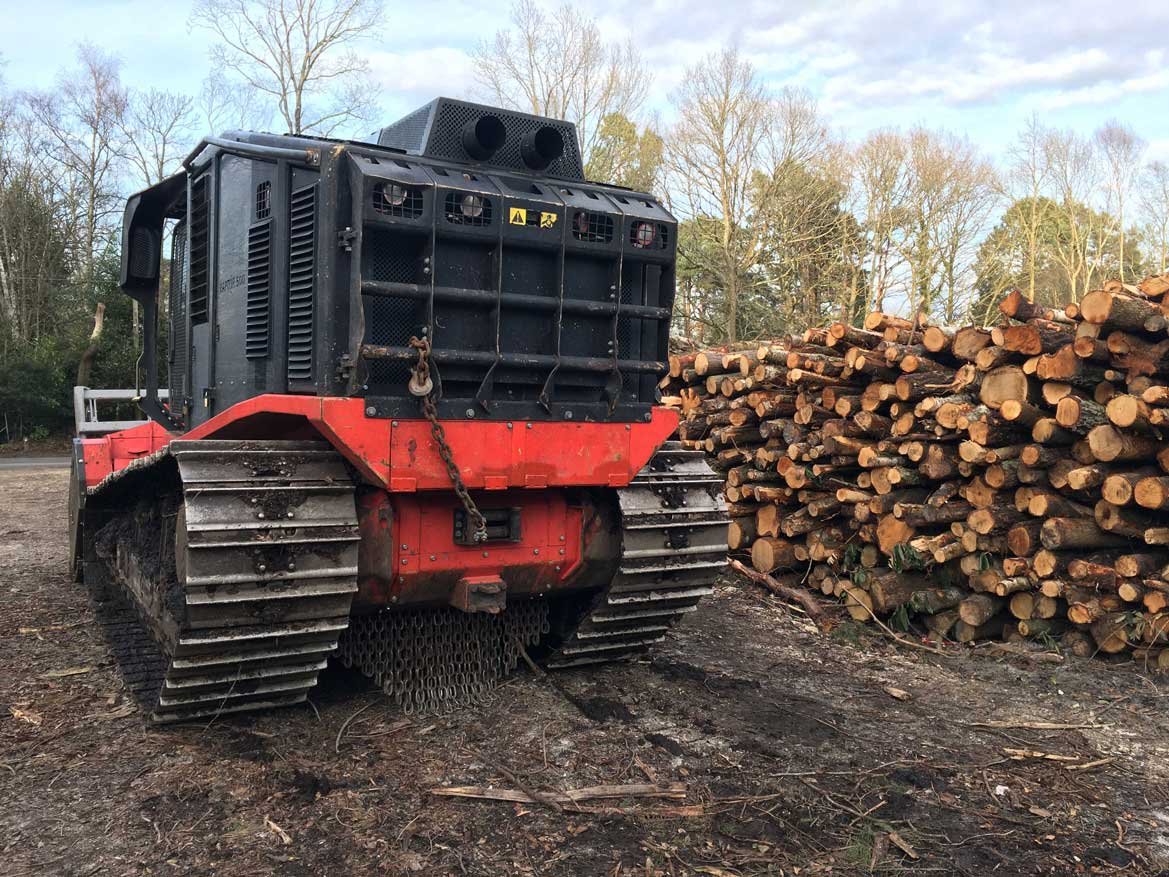 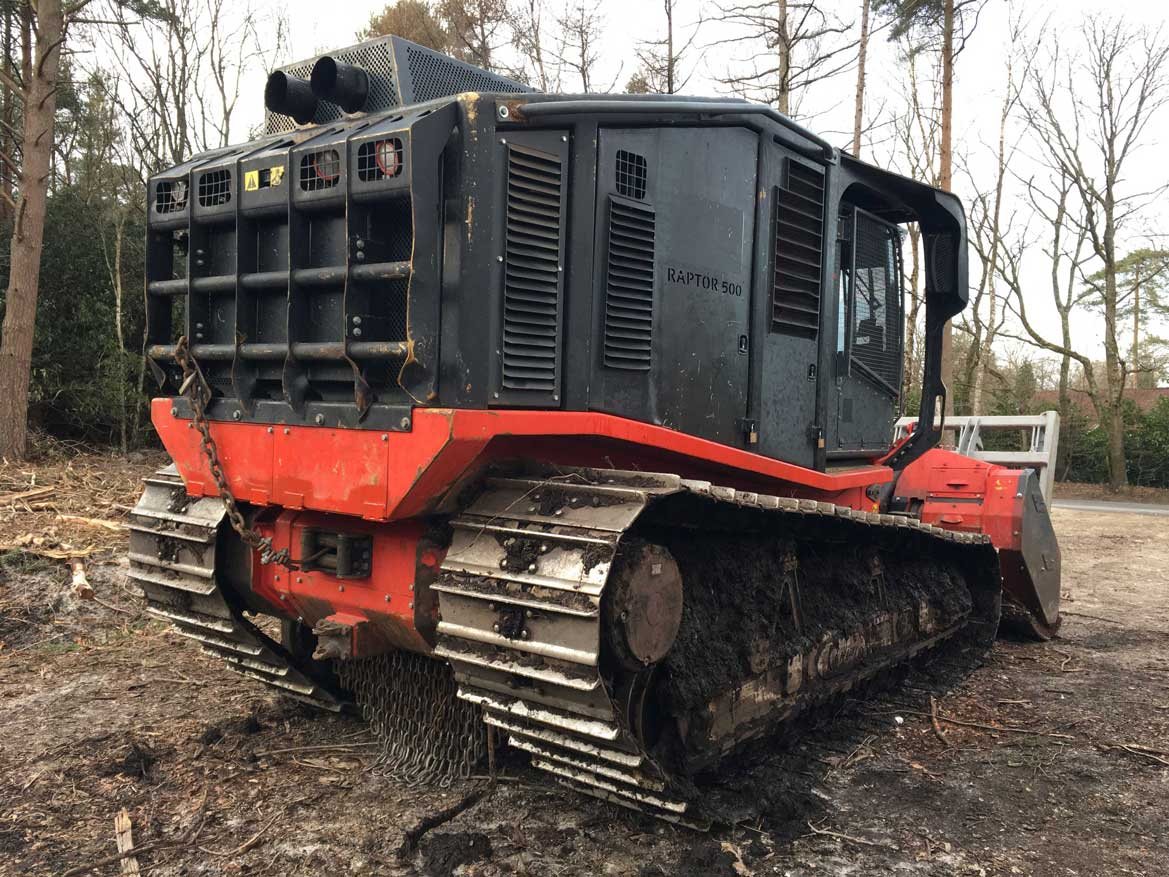 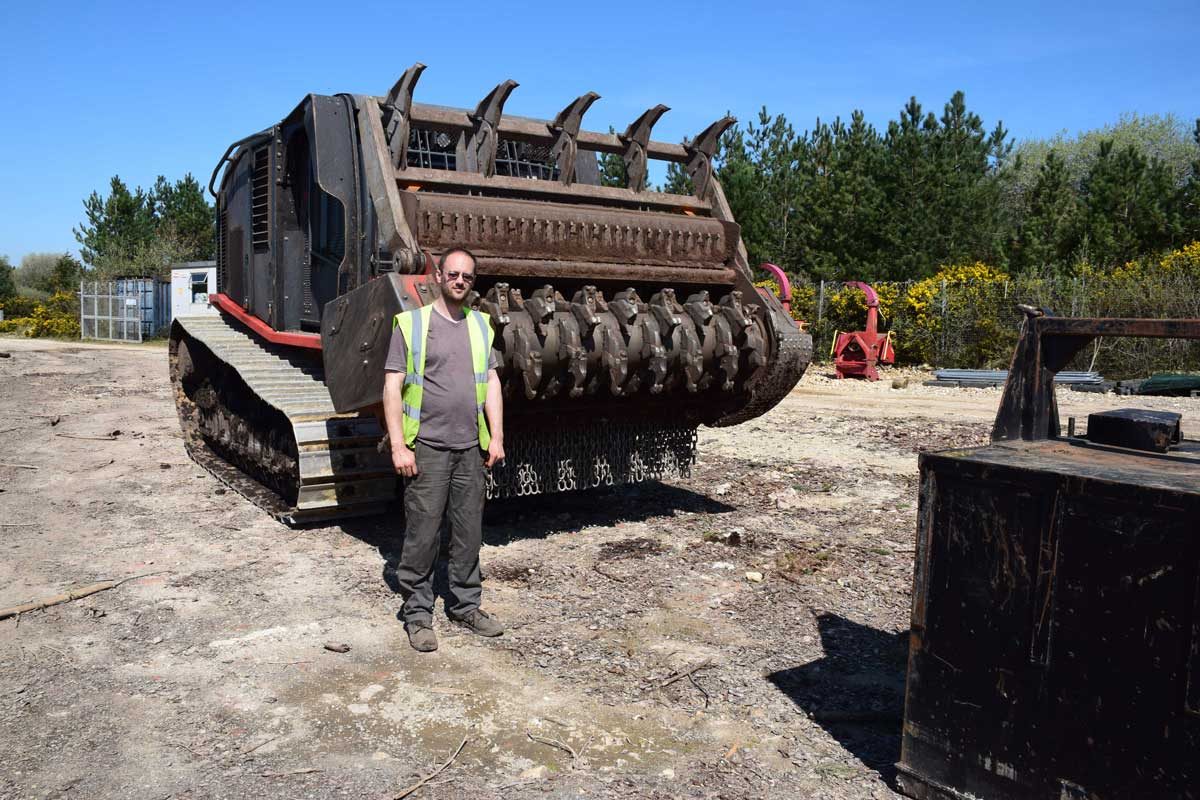 The Making Of Clark Tracks