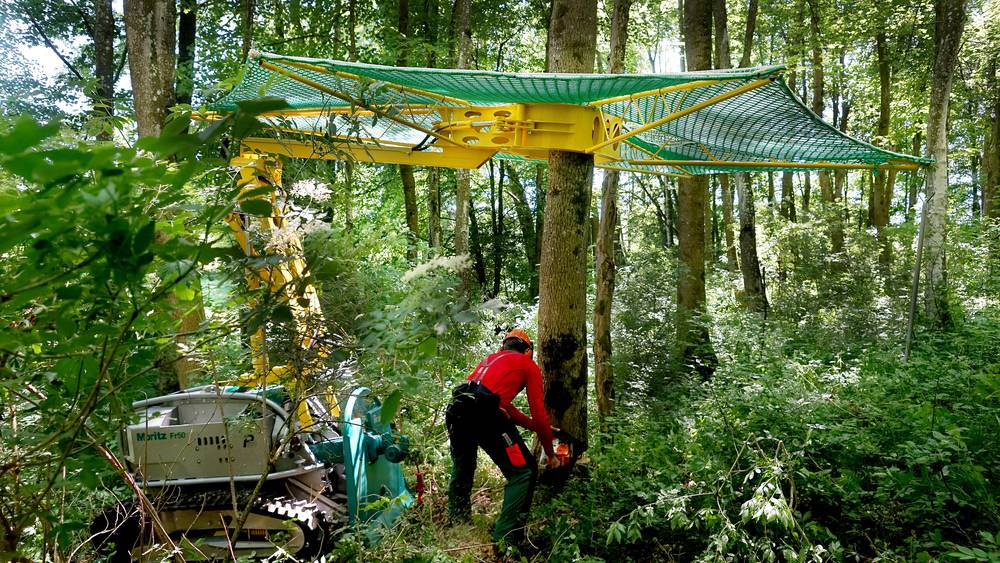 Pfanzelt Maschinenbau GmbH had a large display and demonstration area at Austrofoma and were demonstrating the manoeuvrable and versatile four-wheel drive special Felix forwarder, PM Trac, Logline and S-Line trailers, and the Moritz FR50.

When Pfanzelt first launched the Moritz FR50, it was an extraordinary, remote-controlled mini felling tractor with cable winches available up to five-tonne pulling power. At 1.1m, it was also sufficiently narrow to access awkward entrances and able to hydraulically widen the tracks to 1.4m for better stability.

They didn’t stop there and in recent years they have introduced many attachments to increase its versatility. Currently these attachments include winches, mulchers, stump grinders, ploughs for ground preparation, seed sowing, grass mowing, and wood-chippers. As the Moritz has a PTO drive and three-point linkage, there are many other smaller scale attachments available from other manufacturers.

The newest attachment, which has seen Pfanzelt win Innovation awards this year, is the Personal Protection Screen. This screen was being demonstrated at the show and it is a simple yet genius idea. The Moritz can be driven by remote control up to a tree that is to be felled, and in less than a minute the strong webbed canopy is raised and completely encircles the tree above the point where the chainsaw operator will be working. The Personal Protection Screen therefore acts as a giant umbrella above the operator, fully protecting them from falling deadwood. The join where the screen meets is the felling direction of the tree and once the felling face cut is complete the screen can be opened into a v shape, providing space for the tree to fall. The operator is still completely protected when making the back cut and using wedges and jacks.

This is a breakthrough in the felling of Ash dieback and other dead and dying trees as the risk of injuries and/or fatalities from falling deadwood is extreme. This high level of risk arises from the vibrations of the chainsaw, hammering in wedges and using tree jacks – even wind can increase the risk. Trees to be felled in awkward and challenging terrain can be accessed by the Moritz and the Personal Protection Screen. The Moritz is capable of 45° approach angles front and rear with excellent climbing ability; it has 300mm ground clearance and will travel at speeds of up to 6.5km/hr. Due to its low weight and width, the Moritz can also be easily transported between jobs in a trailer, pick-up or van.

2 thought on “Personal Protection Screen For The Pfanzelt Moritz”