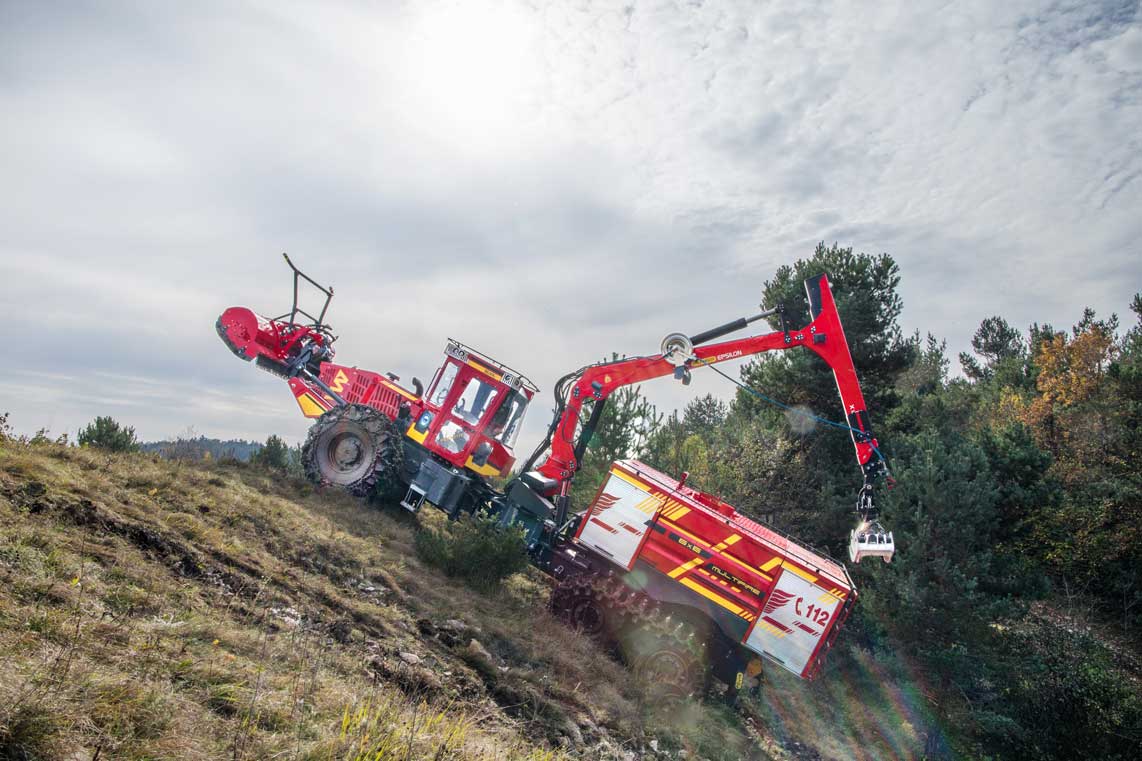 An item which caught my attention while exploring the demo circuit at Austroforma was the MFT 240 6×6 Fire Combi Machine manufactured by the company Bijol. My initial thought was that it resembled a six-wheel drive forwarder, but it was unlike anything I had seen before.

Bijol have been manufacturing forestry equipment for over 20 years at their premises in the Municipality of Vuzencia, Slovenia, near the Austrian border. The company currently produces two types of forestry machines. The first is the Bijol BWS 160 – a four-wheel drive skidder with either 2 x 10 or 2 x 11.5 tonne winches, a logging blade and the capability for a Palfinger Epsilon M70R68 6.8m reach crane to be fitted if required. It has an Industry Deutz 160 hp in line four-cylinder engines with AdBlue, hydrostatic transmission and will travel at speeds of up to 35km/hr. The machine weighs 9,400kg and the winches, butt plate and slow speed driving can be remotely operated from outside the cabin.

The larger model is the BWS 240 forest combi machine, which functions as the base unit for the Fire Combi Machine.

Because of climate change, forest fires have been on the increase year on year and they are some of the most difficult types of fires the emergency services have to deal with. From my own experience there are two distinct types of fires to contend with. The first is the ground fire, which spreads over the forest floor by burning the dead grass, debris and often the peaty soil. Normally a ground fire is dealt with by men with fire beaters. Unfortunately, in windy and hot conditions areas which have been extinguished, the fire could easily flare up again and re-ignite.

Crown fires are also spread in windy conditions – once the fire reaches the top of a tree, it then jumps from tree to tree and can take off in a different direction to the ground fire. The only way to contain such fires is to fell trees and create a fire break which they cannot jump.

When the trees catch fire, it is terrifying; the entire tree is engulfed almost immediately as the resin and needles ignite. This is extremely dangerous for people on the ground and many brave forestry workers,volunteers and fire fighters have suffered serious consequences and fatalities. Anyone who has been involved in fighting forest fires will tell you it is one of the most frightening experiences you will ever encounter; it’s not just the heat you have to cope with but the smoke as it literally burns your lungs and eyes and descends without warning.

During my experience of such incidents, the only way we could get water to the fires in the forest was via a sequence of water pumps. They were very heavy and laying out the hoses on hot ground meant they often suffered punctures, resulting in an ineffective exercise. The other restriction was that they could only be used if a water source was nearby and, more often than not, by the time you got the whole thing set up the fire had spread elsewhere.

Bijol have taken all this information on board and this is where the idea for the MFT 240 Fire Combi Truck started.

It is a six-wheel drive forwarder base with a modern stage 5, Tier 5 Industry Deutz six-cylinder 240hp engine with AdBlue technology, driven by a Danfoss computer-controlled load sensing hydrostatic transmission. The axles are made by NAF and all the tyres are steel reinforced as with all the extra firefighting equipment it weighs 30,000kg.

It has a powerful load sensing hydraulic system with a working pressure of 250 bar. This is necessary to operate the 2.3m wide front mounted mulcher
(powerful enough to handle full trees to create fire breaks which can contain crown fires and to clear areas to prevent ground fires spreading). It is fitted with an 11m reach Palfinger Epsilon crane with a tilting kingpost, which keeps the crane level on steep ground. The boom includes a fire hose for precision firefighting with a jet of up to 60m; in addition, there are three other high-pressure hoses which can be used simultaneously by firefighters. It is available with a 5,000l or 10,000l water tank. There are two 11.5 tonne hydraulically driven Uniforest winches at the rear, it features an electrohydraulic controlled unwinding device for easier cable release, and it has a pulling speed of 0 to 8km/hr.

There are also plenty of storage areas within the Combi Truck for firefighting equipment, hoses, gas masks, etc.

Bijol have spent a lot of time in planning and designing this machine to be an efficient, self-contained firefighting machine which is capable of accessing and containing fires in rough forest terrain. A smoke filter is fitted inside the cabin and it has a clever self-extinguishing system fitted around the entire truck. Another useful feature is that the machine can be remotely driven at speeds of up to 4km/hr via a handheld radio pack, which also operates the cable winches. The Bijol is able to achieve speeds of up to 30km/hr, an added bonus when needing to reach or evacuate an area quickly. Reliability was another one of the major issues to be considered during planning and as a result only the highest quality tried and tested components have been used throughout the build.

The high-risk fire season can be quite short and therefore it was always going to be an expensive machine that could sit idle for many months; consequently, the company designed the Combi Machine so that the firefighting unit can be detached. It can be easily converted back to a forestry machine or can be used with different modules for first aid, National Guard, transporting food and water, etc.

Although this is a prototype which at the moment is undergoing rigorous testing, the specifications can vary to suit individual customers.

Looking back, there have been many instances where, had it been available, this Fire Combi Machine would have saved millions of pounds worth of forests and properties and, in some extreme instances, lives.