Planting in the Borders 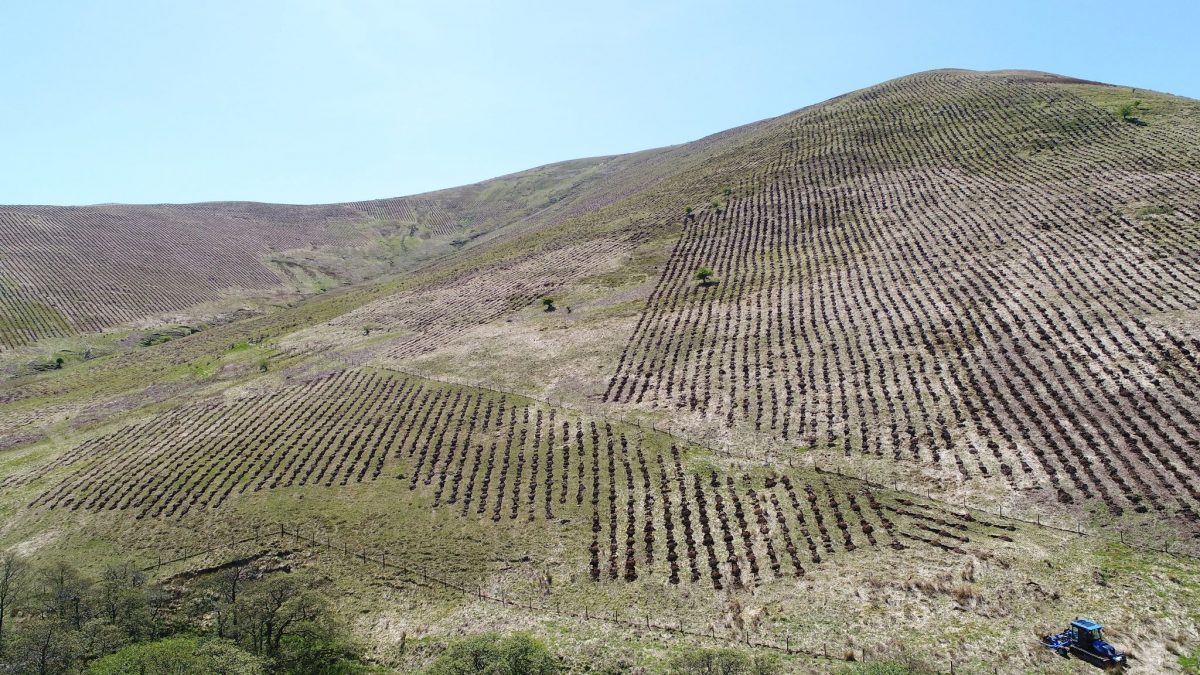 The planting programme for new forests and woodlands in the UK makes for poor reading. The only country getting anywhere near its target is Scotland.
In the year up to 31 March 2020, 13,460 ha of new forests were created, a similar target to what was achieved the previous year. An extraordinary 80% of those new forests – 10,860ha – was created by Scotland and constituted 7570ha of conifers and 3890ha of hardwoods. Scotland’s target was 12,000ha and this would have been achieved if not for the disruption caused by bad weather and Covid-19.
England only established 230ha of new conifer forests and 2100ha of hardwoods, which despite being a rise overall amounts to 190ha less conifer forests than the previous year.
Wales is abysmal; 40ha of conifer and 40ha of hardwood forests were created, a total of just 80ha compared to 520ha in 2019. Northern Ireland is down by 40ha with only 60ha of conifers and 140ha of hardwood forests having been created.
Judging by these figures, we have a long way to go if we are to meet the annual Government targets of 30,000ha of new UK forests each year from 2025 onwards.
My only experience of planting was restocking old clearfell sites manually by screef planting when I worked for the Forestry Commission (FC) and it was backbreaking work.
Simon Richardson is a ground preparation contractor who established his business 17 years ago after starting out as a harvester operator. He prepares sites for the planting of around 3,000ha of new forests on an annual basis and has excavators dolloping and draining about 1,000ha of clearfell sites in preparation for re-planting. He carries out some road building work and has excavators fitted with TMK Tree Shears working on biomass contracts.
Alongside his 11 full-time employees and four sub-contractors, he carries out contracts for Tillhill, Scottish Woodlands, Fountain Forestry and Buccleuch Estates.
I caught up with Simon at a large 600ha site he was mounding not far from Langholm in the Scottish Borders. The new forest was to be established on steep rolling hills either side of the valley. Three of Simon’s machines were mounding the hillsides and an excavator was constructing a forest road for access.
The first machine we saw working was a tracked New Holland TK4 that had been imported from Italy. It has been built with a focus on stability and traction. This machine is exceptional on steep ground as it is designed for climbing the hills and mountains of fruit orchards, vineyards and nut groves. The production achieved while the New Holland crawler was working on the steepest tractor mounted mounders, but it still managed to mound between two to three hectares per day.

The standard Italian cabin doesn’t conform to our noise levels and it took a few months before the alterations to the new cabin met UK legislation. This was a challenge for Lloyds of Carlisle as Simon wanted the safety cab fitted and longer track frames for better stability. Simon explained that many of his operators work long hours, which is fine in summer when there is plenty of daylight; in the winter, however, he makes sure his operators work the steepest parts in daylight and the less severe areas are kept for working during the dark.
Further along the access road, two John Deere 6155 tractors were mounding on the hillside. Technology and operator comfort have progressed beyond comprehension from the Fordson Majors and County tractors that I used to operate and I was left speechless when I discovered more about them.
Once the very first A to B line of mounding is completed, the John Deere Automatic Guidance System keeps the machine on track regardless of the conditions and weather owing to the signal stability. It is unbelievably accurate (up to 30cm) and it ensures that the pre-set 1.9m spacing is perfect and consistent across the entire site. These tractors are fitted with Intelligent Total Equipment Control with integrated Auto Trac. This is an automatic steering system (which works with the Guidance System) and management system which will control tractor speed, front and rear mounted implements, differential locks, and many other parameters. One of the benefits of this system is that it allows hands-free turning, which reduces soil compaction. JD Link shows exactly where the machines are, how they are performing, and what they are doing.

Ploughing:
“This option gives better weed suppression and is quicker and cheaper to carry out. It provides a loosened soil profile but, as the furrows are relatively shallow, the root systems tend to spread across the surface and interlock. This can increase the risk of widescale windblow on wetter sites. It isn’t suitable for restock sites where tree stumps and other obstacles may be present in the soil and for new sites that have rocks and boulders throughout. It is more effective if it is carried out in drier periods as in wet conditions the furrow can collapse back into position.
Given that this method is quite shallow, it can prevent tree root development with soils re-compacting prior to the root systems penetrating the loosened soils. Ploughing can result in a rapid nutrient release which will result in nutrient losses.
I’m actually a fan of ploughing and don’t agree with the current line taken by the commission that it is bad practice. It has its place when used correctly in the right conditions. Ploughing is often blamed for windblow!! I’ve seen plenty of windblow on sites that have been mounded. In my opinion good drainage is the key to keeping the crop standing”.

Scarifying:
“This approach is used on restocking sites and is more commonly used in Scandinavia than over here. It is effective on sites that do not have compacted soils. T he humus and litter layers on the grounds surface are mixed with the mineral soil underneath and this can increase soil temperature and reduce weed competition. The scarifier I use is the non-driven type with ripper legs, which it completes the cycle in one pass.”
For my final question, I wanted to find out what effect Covid-19 has had on his business.
“It hasn’t really impacted on us too much as all our operators are self-isolated in their cabs. We have been able to get spares and fuel during the lockdown period which has kept us on schedule. We don’t carry out the planting ourselves, but it shouldn’t affect planting squads either as it is a one man job with no reason to get close to others.”
Simon was passionate regarding his work and all the equipment I saw working was in first rate condition and maintained to an excellent standard. He runs a thoroughly professional operation and is helping to increase the amount of commercial forestry in the UK. His work will have a significant impact in helping the UK meet planting targets, which should reduce the amount of imported timber we will require in the coming years.