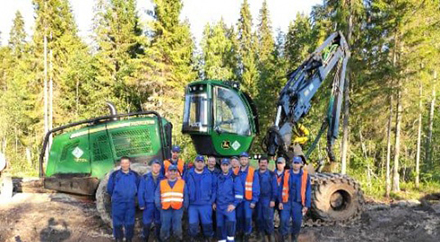 ULK, one of Russia’s largest forestry group of companies recently signed an agreement with WWF Russia. It aims to preserve valuable forests located along spawning rivers in the north western region of Arkhangelsk.

These spawning forest zones are a special category of forests created to preserve the coastal zones of water bodies, where the most valuable species of fish for instance, salmon and sturgeon – spawn. These forests protect spawning rivers from negative impacts of industrial logging – including soil ablation into the water, excessive spring floods and reduction of the water in summer.

In the agreement, ULK states it will not conduct clear-cutting in spawning strips. The company also agrees to completely stop logging in the most valuable forest areas along spawning rivers.

FSC already requires that logging companies comply with the existing borders and the regime of the spawning forest zones as part of the identification and preservation of high conservation value forests. With the agreement signed with WWF Russia, ULK’s commitment goes even further, beyond what the national legal requirements would normally demand.

“FSC is calling for stricter forest conservation requirements that exceed the legal requirements. This is the whole point of voluntary forest certification: responsible forest companies take on ‘increased commitments’ to preserve nature and social values and not only follow the requirements of the law, but also realize their great impact on the ecological situation in the region of their presence and take into account the long-term consequences of their work,” said Nikolai Shmatkov, FSC Russia Director.

This agreement follows from a decision by the Arkhangelsk Federal Forestry Agency at the end of 2019, the agency modified the protection status of valuable forests along three rivers of the Ustyansky district.

These forests represent 12,000 to 15,000 hectares in the region of Arkhangelsk and about 50 million hectares totally in Russia and have now become production forests in which clear-cutting is allowed.

Environmental NGOs including Greenpeace and WWF Russia have signed a collective appeal with more than 163,000 citizens. It calls on Russian President Vladimir Putin to protect valuable forests along the rivers. These environmental organizations and other petitioners worry that loggers may not act as responsibly if a similar situation occurs in another region.