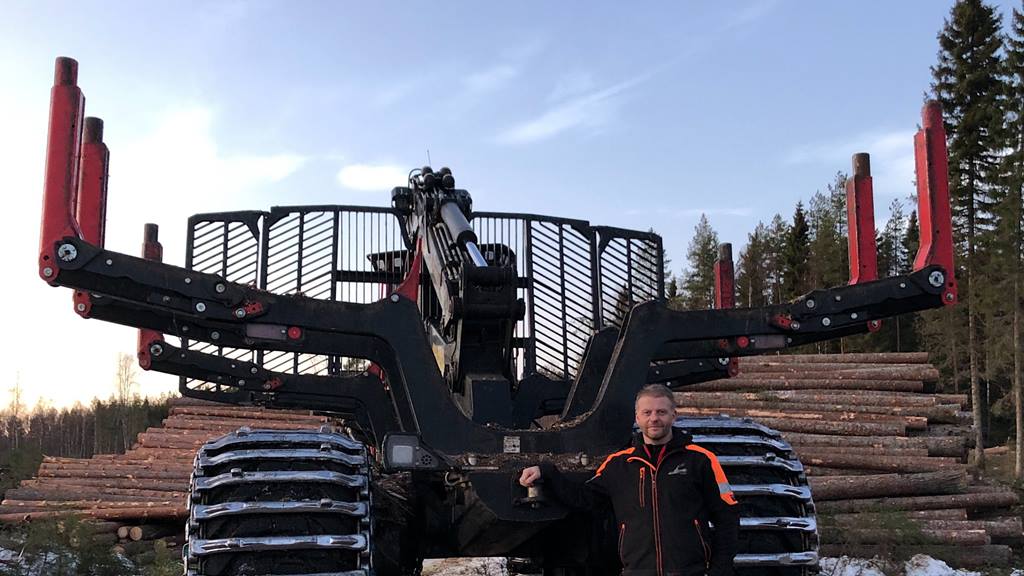 A stable forwarder does not only mean a better work environment with less strain on the operator, it’s also of great importance to achieve good productivity. To forest machine contractor Patrik Jonsson, at J Jonssons Skogs AB, the greatest benefits lie in more efficient crane operations and a higher transport speed.
– I have had this Komatsu 895 since May 2019, and it is the most stable forest machine I have operated, says Patrik Jonsson.

J Jonssons Skogs AB is a forest machine contractor in Älvsbyn in the north of Sweden, which today consists of the brothers Patrik and Johan Jonsson as well as three employees. Their father, Jonny Jonsson, founded the company and is still involved as CEO, even though he is retired from being an operator. To Komatsu Forest, the company is a relatively new customer, when, after countless years with another brand, they chose to switch to our machines:

– Yeah, that’s right, we had not tried Komatsu before. The process of switching brands was a pretty long one. There are many factors that come into play – machine, services, maintenance and our general feeling about the company. In the end it was how all of these came together that made the decision. We started with a 951 in 2017 and Komatsu has lived up to our high expectations, explains Patrik.

Distinctive forwarder stability
Since everything has worked so well with the harvester, the company decided to switch to a Komatsu on the forwarder side as well, and they chose a Komatsu 895 which they’ve had since May 2019. Patrik, who has now operated the forwarder for 8 months, explains that a significant difference compared to their previous forwarders is how stable it is:

– All forwarder operators at the company agree that it is extremely stable. There are no surprises – it’s very reliable. We also have LoadFlex, which maintains a low center of gravity, even with a load.

When do you think it is most important?
– In general, I would say. With good stability you become more efficient – that’s a fact. I can operate the crane more efficiently when I don’t have to focus on obstacles in the terrain – I can work at the pace I want. Even at uncomfortable angles, I notice the stability – for example when going downhill. The rear frame follows in the same direction as the front frame when turning and maintains ground contact.

Which benefits do you think the stability has for you as an operator?
– Being able to work more efficiently, as I said. But you can also feel it at the end of the day. If you trust the machine and can work in a relaxed way, you feel less stressed and less tired and this also means that you make better decisions, concludes Patrik Jonsson.

This is J Jonssons Skogs AB

Location: Älvsbyn, in the north of Sweden

Client: – We have been running logging operations for SCA ever since Grandpa started in the 40s.

History: – Grandfather Sixten Jonsson started in the forest as a 12-year-old in the 1930s, because he liked horses. In the beginning, he used a horse and sled, and then moved on to his first machine, an Oliver Cletrac. Daddy Jonny continued down the same road and started his own company in 1970, which today is J Jonsson Skog AB. Today he does not operate machines but is still CEO. The brothers Patrik and Johan Jonsson are also working in the company, together with three employees.