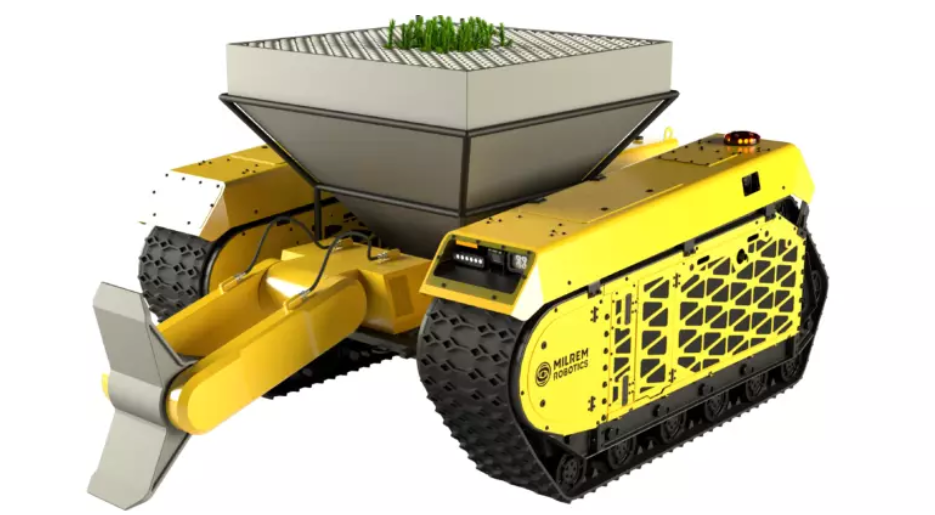 Robots help us in many ways – from assembly lines to looking after the elderly. Now they’re turning their attention to combating climate change by helping to plant trees.

Milrem Robotics, an Estonian company which started off building autonomous tanks, has developed an autonomous robot forester that can plant and nurture young trees. The new robot planter carries up to 300 saplings and can plant a hectare of forest in less than six hours.

Although the robot forester is primarily designed for working in commercial forests, the designers say they believe it could be used to restore natural forests too.

Deforestation contributes 15% of all global greenhouse gas emissions, yet, according to the World Economic Forum’s platform for the trillion trees community (1t.org), the amount of carbon captured by existing forests could be doubled simply by adopting sensible forestry practices.

We lose 10 million hectares of trees every year to agriculture and logging and conservationists say we need to plant a trillion trees to reverse forest cover loss and help slow climate change. A mature tree can capture an average of 0.62 metric tons of carbon dioxide over its lifetime – equivalent to the carbon emissions from driving a car 2,400 kilometres.

Tree planting is just one of a range of measures needed to combat climate change and scientists say it’s important to plant the right trees in the right place for it to be effective. So reforestation efforts need all the help they can get.

The robotic planters are equipped with Lidar (Light Detection and Ranging) which uses laser pulses to build up a three-dimensional image of the robots’ surroundings and global positioning (GPS) to navigate precisely across the terrain.

The position of each sapling is logged in a database as it is planted, which means that a specialized brushcutter version of the robot forester can cut back competing growth without harming the young trees.

The robots were developed in partnership with the University of Tartu, Tallinn University of Technology (TalTech) and the Estonian University of Life Sciences and the project has been backed by a $2.4 million grant from the European Union.

Makers Milrem Robotics say their robot vehicles can also be used to prepare the ground for planting by towing ploughs. In addition, they have been adapted to carry ploughs of a different kind, clearing snow from the streets of the capital Tallinn.

These robotic planters are just one of the many new solutions beginning to surface in time for the decade of delivery on climate change. The World Economic Forum’s UpLink platform, alongside 1t.org, is helping innovations like this scale their efforts to conserve, restore and grow a trillion trees by 2030.

Forest Machine Magazine is a dedicated forestry news channel. It is written and edited by a forest professional with over 40 years hands on experience. We are dedicated to keeping you informed with all the latest news, views and reviews from our industry.

Spaldings at the Midland Machinery Show