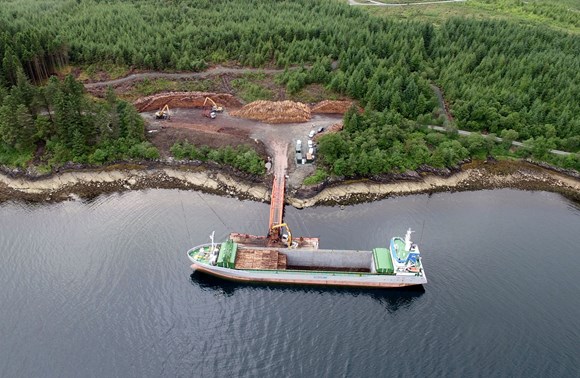 (Photo: Credit: Creel Consulting Ltd/JST Services. For illustration purposes: a floating timber pier similar to this one at Ardcastle, Loch Fyne, will be built on the Morvern Peninsula to transport timber by sea.)

A public and private partnership project in the Highlands has received funding from the Scottish Government to move maturing timber over a new forest road to a floating pier to be built on the Morvern peninsula.

Under the Strategic Timber Transport Fund, over £987,000 has been awarded to the project, with additional contributions being made by three private sector forest owners.

The plan is to build a forest road connecting up three timber producing forests on Morvern, which will then take the timber to a floating pier where the timber can be loaded onto ships.

Importantly, the new initiative will mean that an estimated 12,000 lorry trips will be averted off the narrow B849, which is used by the Drimnin and Lochaline communities.

“Forestry is an important industry which is key to our green recovery. It generates around £1 billion to the Scottish economy each year and supports around 25,000 jobs – many of these in remoter rural areas.

“This new public and private project is a winning solution for all. It allows the forest owners to get their timber to market, for the benefit of the local and national economy, but in a way which minimises impacts on the local communities.”

Scottish Forestry, the agency which administers the funding, is keen to see innovative solutions to tackling timber transport issues. By moving the Timber by sea, the number of lorry trips needed are reduced, which is also a benefit in tackling climate change.

In total, it is estimated that around 163,000 cubic metres of timber will be moved by the sea in the new project, avoiding the use of small narrow rural roads used by the Morvern and Ardnamurchan communities.

“The commencement of this project represents the culmination of many years of effort to find an environmentally sensitive way of exporting timber from Morvern’s forests.

“It will remove the long-standing threat of large volumes of timber traffic on Morvern’s fragile roads and the adverse impact that would have on residents, the environment and the tourist economy.

“We are very grateful for the support of Scottish Forestry, the Scottish Government, the Highland Council and the Morvern Community Council in realising the wishes of the local community.”

“It would have been very costly for the council to upgrade the public road and works would certainly have caused disruption for anyone living and working in the peninsula.

“However, we are delighted as not only does this project provide welcomed investment but by reducing timber transport on the local road network it will make a significant difference to those living in the community.

“The Strategic Timber Transport Fund has brought great benefits to the Highlands in recent years and we will continue to work together with the private sector to develop projects to resolve identified timber Transport problems.”

The partners involved in the project include Scottish Forestry, Highland Council, the Drimnin Estate and the owners of Carnacailliche and Auchnasaul forests.

MAN Trucks, stepping up to the mark