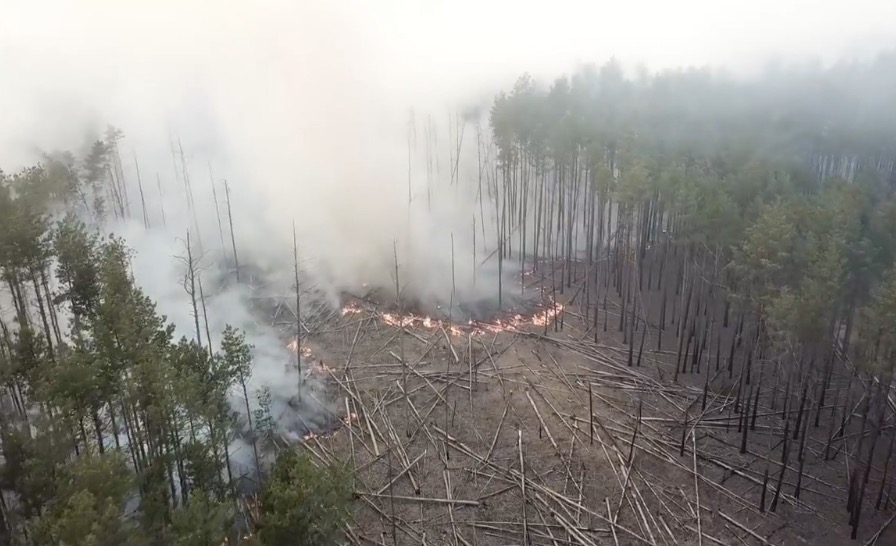 The fire has come to within about two kilometers of the abandoned nuclear reactor that exploded in 1986.

The wildfire burning through the radioactive forest in Ukraine  has come to within about two kilometers of the “New Safe Containment” structure that covers the remains of the Chernobyl nuclear reactor that exploded in 1986 at Pripyat.

According to satellite imagery from 5:50 a.m. EDT April 12 the eastward-spreading fire has crossed the Pripyat River just north of the city of Chernobyl. Our very unofficial estimates conclude that the blaze has burned nearly 18,000 acres. An even larger fire is burning about 25 km to the west.

Elevated radiation levels have been detected recently near wildfires burning in the Exclusion Zone or Zone of Alienation around the abandoned nuclear power plant. People are not allowed to live within 19 miles of the closed facility, however about 200 have remained in the area despite orders to leave.

Below is an excerpt from a New York Times article published April 11:

…Over time, radiation has settled into the soil, where its half-life ticks away mostly harmlessly. But the roots of moss, trees and other vegetation have absorbed some radiation, bringing it to the surface and spreading radioactive particles in smoke when it burns. Wildfires break out there often but the blazes burning through dry grass and pine forests this spring, after a warm and dry winter, are far larger than the typical brush fires in the Chernobyl zone.

By Saturday, about 400 firefighters, 100 fire engines and several helicopters had been deployed to the exclusion zone.

According to the state center of radiation and nuclear safety, contaminated smoke is expected to reach Kyiv this weekend. However, the radiation level in the air, once smoke has disbursed far from the fires, is considered safe. It is expected to be about a hundredth of the level deemed an emergency.

The Exclusion Zone Management Agency is trying to protect critical infrastructure in the Chernobyl zone, such as the plant itself and the so-called “graves,” or parking lots of abandoned, highly contaminated trucks and tracked vehicles that were left from the original disaster, officials said.

“We have been working all night digging firebreaks around the plant to protect it from fire,” said Kateryna Pavlova, the acting head of the agency that oversees the area.