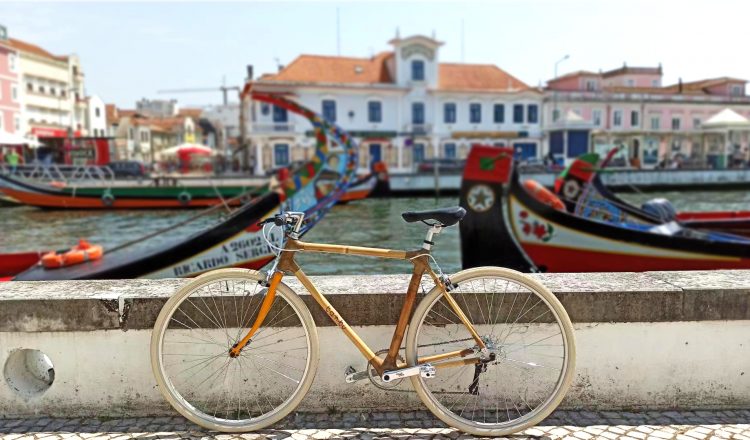 The owners of a Portuguese bamboo bicycle business speak about their passion to promote the grass plant in Europe.

By the standards of their small Portuguese village Curia, Joana and her brother Tiago have a rather unusual occupation. The siblings run their own bamboo bicycle workshop, Bambu Bicycles. What started as a passion project has now become a major way of raising awareness about bamboo in Europe: travel journalist Sergi Unanue recently completed his tour of continental Europe using a Bambu bicycle, covering more than 7000 km in 142 days.

Joana and Tiago first became interested in bamboo when Joana was living in China, a country famously rich in bamboo resources. Tiago, who was an industrial designer for Evoke Motorcycles, came to live with Joana for a few months, and the two became interested in bamboo as a material. As Joana puts it, “We were dazzled. When we first discovered bamboo bicycles, we became amazed by their unique appearance, beautiful design, light weight and comfort to ride. We instantly fell in love with the idea of starting to craft our own bamboo bikes and becoming the first bamboo bicycle frame builders in our home country, Portugal.”

Joana and Tiago learned how to build bamboo bicycles, and then put them to the test: cycling 300 km along the famous Camino de Santiago together with their younger brother in 2019. Since then, they have been busy refining their product. In October 2021, Sergi Unanue completed his own mammoth cycle ride on a Bambu bicycle, from Punta de Tarifa, the southernmost corner of Europe, to the Northern Cape, Norway. Joana says that Sergi carried a small repair kit, in case he needed to add resin or reinforcement, but adds that the bike did not encounter any large issues during its 7000-km journey.

On the uniqueness of bamboo, Joana says: “Every material has its special properties, [including] advantages and disadvantages.” Bamboo is a good option for bicycle frame building because of its tube-like shape, and its strength-to-weight ratio, which makes it very light. This last property “is one measure most appreciated in bicycle frame builders and users; bamboo is particularly strong and light, even compared to the top materials in the industry, like carbon composite.”

Because bamboo is a biobased material, it is susceptible to insects and weather damage. To increase their products’ lifespan, each pole is treated with Boron Salts, a natural insect repellent and preservative, and then covered with a thin layer of polyester resin. Such treatment protects the poles both from the inside and outside.

The company currently buys their bamboo from a sourcing company in Spain, Bambusa, that imports bamboo from Colombia, China and Indonesia, but they have hopes of sourcing from Europe in future: “Our goal is to raise awareness of the potential of bamboo and be part of the movement to grow bamboo in Europe.”

Although bamboo bicycles are already being built in a number of countries, from China to Ghana, European customers are often surprised to hear about them: “In general, the bamboo bikes world is still a niche; even within the cycling industry and bicycle touring it isn’t well known.” In particular, customers “love the design and elegance of a bamboo bicycle”, and a number of eco-hotels and travel agencies in European countries have expressed interest in purchasing some.

“We love the idea of using bamboo not only to promote sustainable mobility, but also to be part of a platform that can raise awareness about bamboo.” The company is one of the founding members of the Iberian Bamboo Association, created in Spain in 2019 following an event hosted by INBAR.