Parking Up The PONSSE 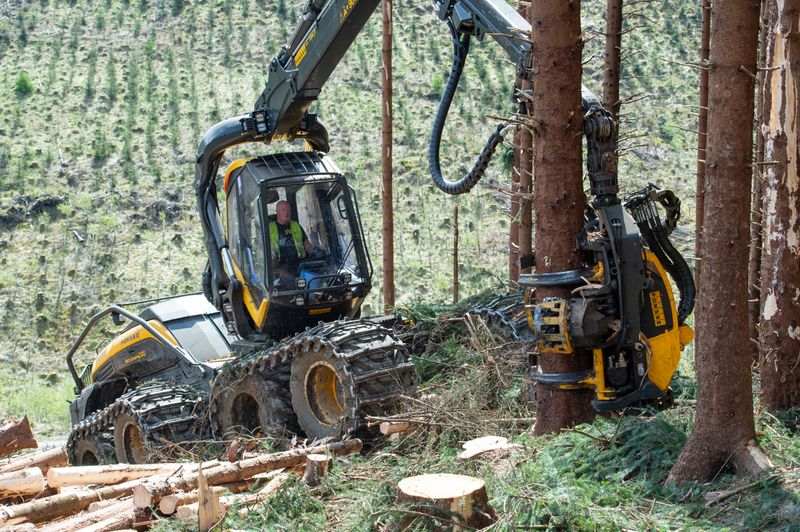 This is one article I never thought I would be writing. My friend and colleague Davy Wilson has finally decided to pass on his PONSSE Scorpion King’s keys and enjoy a well-earned retirement!

Davy Wilson has been in forestry for over 50 years and spent the last 20 odd years operating PONSSE harvesters for the Dick Brothers Ltd from Galashiels. He is one of the most productive operators I have ever known and someone who manages to get the very best from the harvester he operates. His machine is always in immaculate condition, and it is a rare to hear of Davy needing mechanical assistance.

Any forwarder operator who has followed Davy knows that he is one of an elite group of naturally gifted harvester operators. I was lucky and had the opportunity to follow him on several occasions.

One site I worked with Davy was on a Euroforest harvesting job in central Scotland, he was cutting multiple sizes of products which can be a forwarder operators’ nightmare. Not so with Davy, his presentation was as close to perfection as you can get, I think there was about 12 different sizes on each harvested drift and every stack of produce was tidy, separate and easy to lift. We were working in particularly bad weather with a lot of snow, and I was having to secondary extract the timber about half a mile down an icy forest road to where the Lorries could collect it. The whole of Scotland was affected with bad weather and this was one of the few sites that wood was moving from. I was running without chains or tracks, and it was especially soft in places with some deep drains hidden by the snow, inevitably I got stuck quite a few times. Davy would always stop what he was doing and be over instantly with his harvester to de-bog the forwarder. It’s during times like these you realise that Davy is a team player and what happened on site stayed on site.

I have known Davy for over 20 years and he is a true gent every sense of the word and is revered by anyone that knows him. I remember speaking to Davy Dick a few years ago about Davy and he said jokingly that it’s such a shame that the technology wasn’t available yet to clone him. High praise indeed!

Neil Simpson currently works alongside Davy. “I have been fortunate to have followed Davy for the last six years and anyone who has worked with this gentleman will tell you what a first-class job he does. It doesn’t matter if it’s flat or steep the presentation is always spot on.”

“I would describe Davy as an absolute grafter and a proper gentleman who commands the respect of everyone who has worked with or alongside him. He was on the go 12 hours a day every day but still had the time to help anyone who needed it.”

“It’s been a joy to work with Davy and he has made my job so much easier. Mrs Wilson had better keep him busy otherwise she might have to accept semi-retirement as I honestly believe it won’t be the last time, I see Davy at the controls of a PONSSE harvester.”

“I would like to wish Davy all the very best for the future and to thank him for not cutting too many 1.7m posts.”

Most of Davy’s harvesting was carried out for Euroforest who are the UK’s largest independent provider of timber and marketing services in the Scottish Borders. Simon Coleman, Director for Large Clients at Euroforest, has spent many years working along with Davy.

“Davy Wilson was the first harvester driver I meet when I started with Euroforest 14 years ago. At the time he was driving for the Dick Brothers and working with a former Euroforest manager, Kenny MacKenzie in the Scottish Borders where they had worked together since 2003.”

“Davy and Kenny had a good working relationship and Davy would often instil his pearls of wisdom with comments like ‘only fools and bairns should see a job half done’, leaving it up to Kenny to decide which he was.”

“Davy continued working for Dick Brothers and Euroforest and in 2009 started harvesting for Aitchesse (now Gresham House) at a challenging forest called Longford in the Scottish central belt. The forest had a heavy-duty forest gate that was diligently locked every night and weekend, and all was okay until Davy returned to site one Monday morning to find he had a harvester, but no harvester head!”

“Davy’s friendly and conscientious personality didn’t go unnoticed, and a programme of work was soon identified by Aitchesse for Euroforest and Davy in Eskdalemuir. In 2010 Davy started harvesting in a large forest complex called West Buccleuch before moving over the road to a forest called Midgehope. He has since harvested almost continuously in Midgehope, cutting much of the timber harvested to date.”

“Davy’s attention to detail and his ability to maximise value are key skills highly sought by Euroforest and Gresham House, and he soon became one of our drivers of choice.”

“Davy is a true gentleman and has always been willing to show customers and visitors the commercial side of forestry and demonstrate how trees are turned into timber in exchange for a few warm pies. He has helped several Euroforest staff over the years develop their harvesting knowledge and careers from trainees to managers, myself included and I wish him all the best in his retirement.”

On a personal note, Davy, you will be sorely missed by a lot of people in forestry. Wendy and I wish you a long and very happy retirement. You are leaving a void in the industry that will be almost impossible to fill. I would also like to remind you that I won’t be taking retiring as an excuse for you to stop subscribing to my magazine.