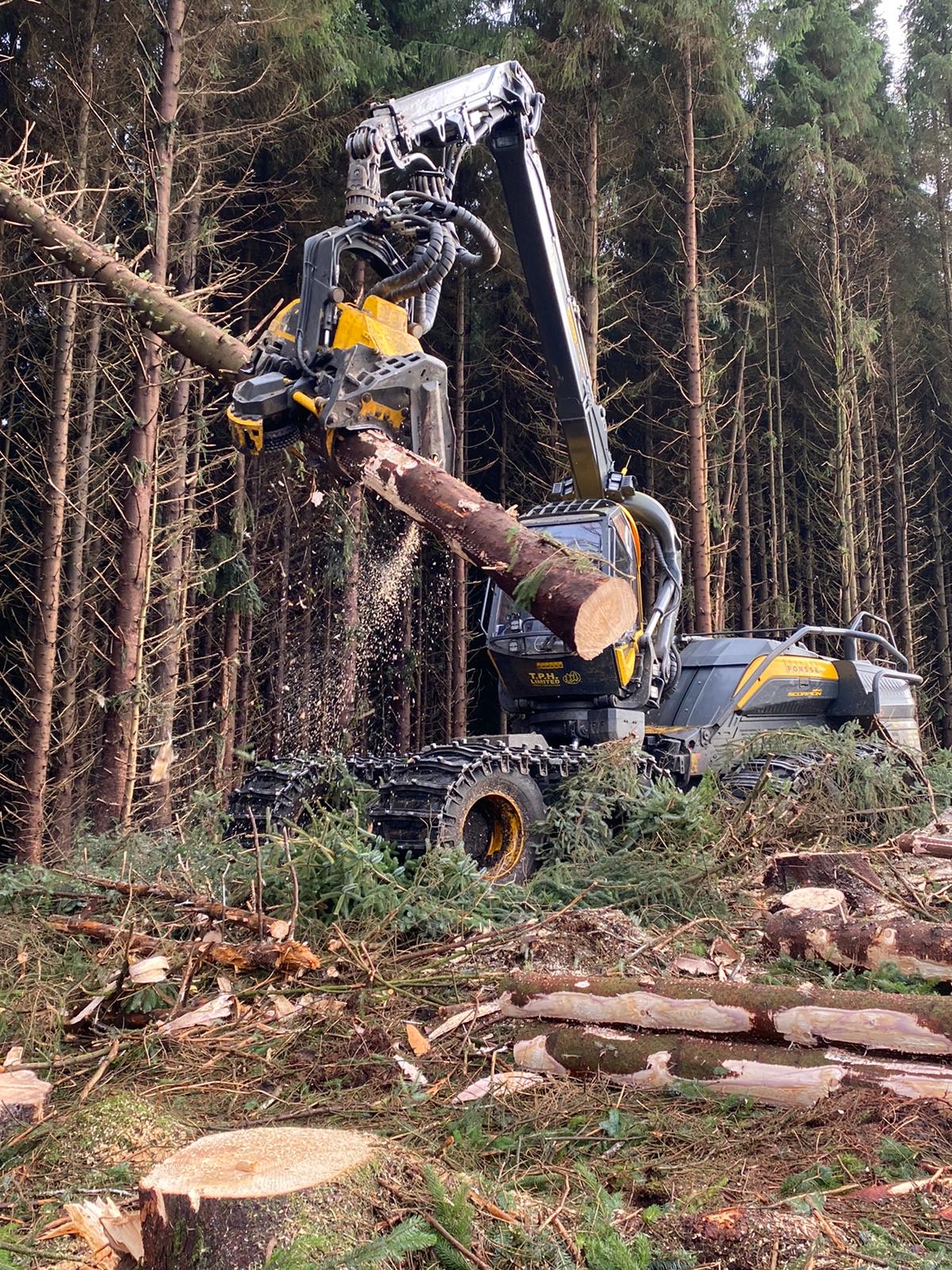 Today we take a look at the Ponsse Scorpion King which is operated by Graham Robson of TPH.

The Ponsse Scorpion King Is an 8WD harvester powered by a 280hp Mercedes Benz EU stage V/Tier 4 Final engine. It has a unique three hull design that keeps the cabin level at all times and an overhead forked main boom, with either 10 or 11m reach crane option for a completely unobstructed view.

The Scorpion King stands between 2690 – 3085 mm wide. It has 655mm ground clearance and typically weighs 22,500kg. There are three Ponsse harvesting head options available. It has a two circuit hydraulic system which is particularly good for regeneration felling.

Ponsse’s Opti information systems are designed to be user-friendly. Therefore, their design takes into account the wishes of drivers and the requirements of forest companies. Ponsse Opti has a system for forestry machinery as well as logging control and monitoring. With the easy-to-use programs of the Opti system, controlling, adjusting, managing the application files and calibrating the machine are convenient.

The Ponsse Manager connects forest machines to an information network. PONSSE Manager, the modern digitalization platform for forest machines, enables comprehensive services now and in the future. The easy-to-use tool offers assistance in harvesting equipment maintenance and work planning, along with providing access to extensive reporting.

Graham has worked for TPH off and on for 16 years. Graham started on a part time basis operating a forwarder on nights and weekends. He began working full time 9 ½  years ago on a forwarder for two years before progressing to a harvester. After operating various John Deere harvesters Graham changed to the Scorpion King 18 months ago.

Graham is very happy with this machine; he finds it very operator friendly with visibility and stability being exceptional. Although the tree size in the crop he is in is a bit of a struggle especially with the bigger trees in the wind-blow, he is still managing.

“Where the machine really comes into its own is in smaller crops. 0.4 m³ and 0.5m³ being the optimum size. The machine is excellent in crooked stems. The Scorpion performs well on soft ground although I feel the back end of the machine does seems to go down easier than the front”.
Graham is currently harvesting on a local site cutting direct for the forestry commission. It is a second crop site with a 0.9m³ tree average across the whole site which includes patches of wind blow. The average tree size Graham has harvested so far is 0.78 m³.

He is achieving an average production of 28.4 m³ per hour and using 18.5 litres of fuel per hour.

“The frame lock uses a ram either side of the chassis in the centre section which are linked to the cab levelling rams, this system gives unparalleled stability. One feature I really like is the alarm system which warns if the machine is in danger of tipping when reaching out too far on steep side slopes.

The refuelling point is at the rear of the machine and the hydraulic oil filling is under the front hood of the rear section. The hose layout is one area where the machine could be improved, especially the hoses under the cab and the centre section.

This Scorpion is on a service contract with Ponsse, with services at 750 hour intervals. Graham helps the engineer out during these services and he finds the machine very easy to work on with filters etc being easily accessible.

“Storage is adequate but I could always do with more. The side pod on the rear is handy though for storing hoses, and there is another compartment in the front step. There are 2 led lights under the hoods for servicing with a further one for refuelling”.

“Although the cab is small, the all round comfort is excellent. One of the main reasons for this is the stability of the machine as I am not getting rocked about all day and at the end of my shift I still feel really fresh. The seat is heated, has a cold air blower and is easily adjusted. The armrests are comfortable and I really like the comfort grip levers (pillars).

The noise level in the cab is quiet, the only downside being caused by movement of the hydraulic pipes and hoses while being worked.
The vision on this machine is unparalleled. With the cab rotating 320 degrees you are mostly looking out of the front window even while reversing. Even if I have to look out of the side and rear, vision is good because of the narrow pillars on the cab.

When the machine was new the cab had to be calibrated a couple of times but since then it hasn’t needed to be touched at all. The levelling works really well, the only glitch being when pulling big trees from the side it will pull the cab down a little bit but other than that, perfect.

Lighting is covered by a bank of lights on the front of the cab below the window and a bank on the top of the cab with further lights on the side and back.
Despite the fact that this is an easy computer to use I must admit it took a bit of getting used to after operating the John Deere system for years. I do feel however that there are a lot of similarities between the two systems”.

“I find the Scorpion crane to be really smooth, with the slew power on the machine being really impressive but I feel the main lift could be better. I have to work close to the crop to achieve the best results. The one function I do really like is the automatic extension which works automatically in conjunction with the dipper arm, using the left lever.
The hose layout on the crane is excellent with hoses down to the head easy to change and there are two lights under the dipper boom and six on top of the king post providing excellent lighting”.

“This saw is phenomenal. The machine is coming up 18 months old and I haven’t had any problems at all. Where the saw bar fits on is really strong which does away with much of the sideways movement. Bar and chain wear is excellent. The head is good for felling but I am currently in a 0.8 metre average job so sometimes the head is letting go during felling on the bigger stems. The feeding on the head is fantastic. In large trees it has a proportional feed, operated by a toggle on the pillar, which slows things down to get an accurate start on the tree. The head handles bent twisted stems with ease due to the reaction bar, and being able to feed the tree right out to the tip and then right back to the start without losing grip is a major plus point. De-limbing is really good and capable even on edge trees”.

Graham uses the semi automatic system for sawing. This system is utilised by keeping the saw button pressed just before it reaches its length and the saw cuts soon as the length is reached.

“Measuring on the Scorpion is very accurate; it’s the best measuring head I have ever used. I calibrate the measuring on average once a fortnight but I do feel that it isn’t really necessary as it very rarely alters”.
“The hose layout on the head is exceptional. None of the hoses are exposed I have had problems with catching feed roller hoses on previous machines I have operated. The feed roller hoses are really well routed on the H7 head, and I’ve never caught one yet.”

“All the greasing points can be reached with the head in one position although the two nipples on the tilt frame swing arm are difficult to grease and could do with being extended so they aren’t as difficult to reach.”
“Overall the head is very reliable and there has been very few issues with it. One problem though is the measuring wheel bearing wear. I have been changing these at nine month intervals, before they actually fail. Another issue is with hoses on the tilt frame manifold wearing through including the hose housing the electric cable”.

The oil flow for the saw can be adjusted via the computer. Graham says he usually uses about four litres of chain oil a day, which is ample as he has no issues with excessive bar wear or broken chains.

If there has to be a bad point of this machine, transportation is it. The machine itself is easy to put onto the low loader but knuckling up the crane to get it low enough in Grahams words is a real headache. Fitting of quite a few guards is needed and then some special manoeuvring techniques are required to get in to place.

“Back up is A1, on the rare occasions I have had to call out a van, they have always been there the same day, even at 3.30 on a Friday”. If Graham needs spares he orders them over the phone and they are usually delivered to his house the next day.