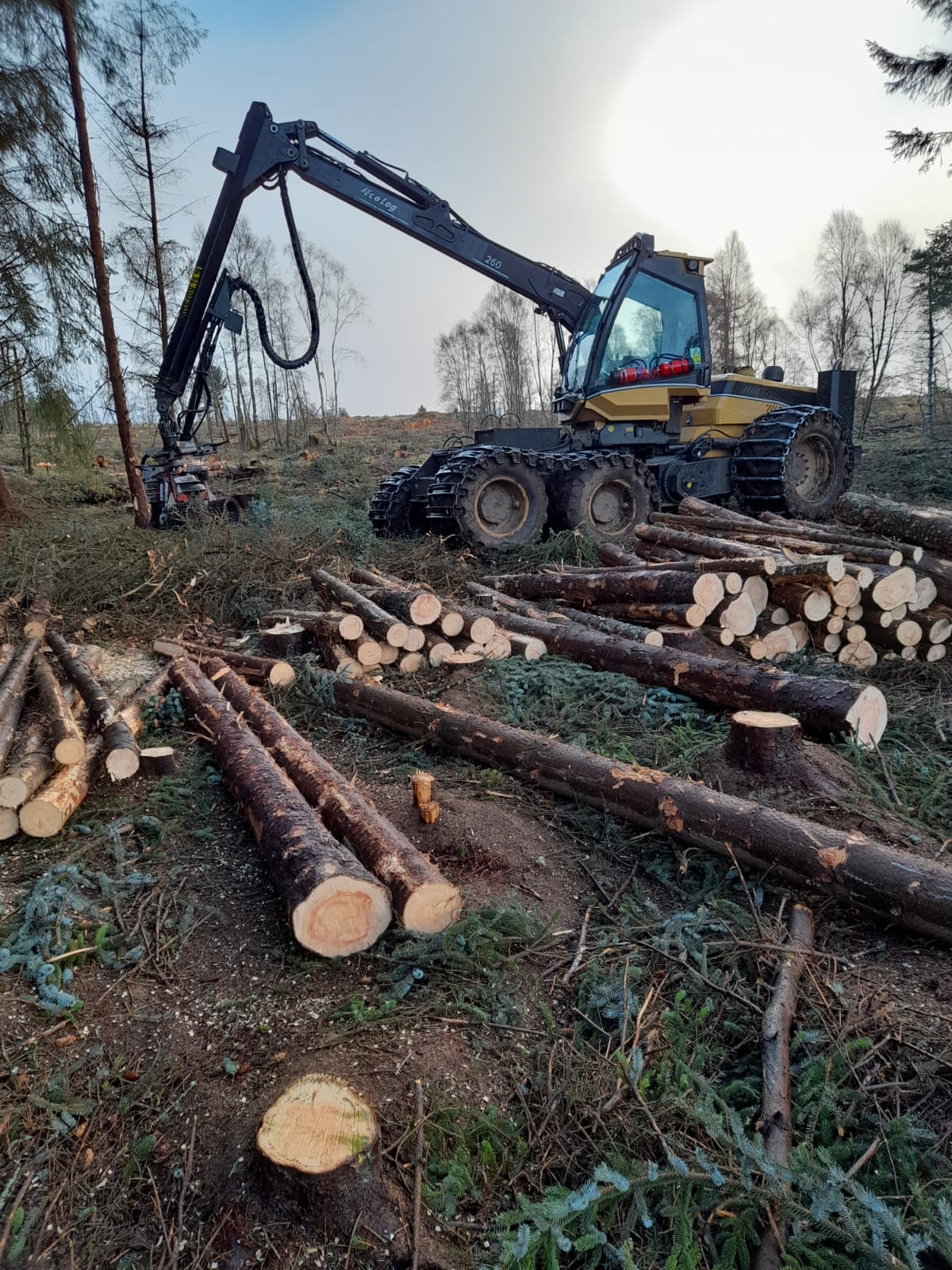 Today we take a look at the Eco Log 560D which is operated by Neil Fraser of Fraser Timber Harvesting Ltd.

This is a self levelling harvester with adjustable ground clearance from four inches to almost four feet. The independent pendulum arms are able to raise and lower each axle individually. The side mounted crane has reach options from 9m to 11.5m and can be fitted with your choice of four Log Max harvesting heads – 3,000, 4,000, 5,000, 6,000.

Eco Log use the DASA Forester operating system. Forester is the latest generation of systems for optimised logging and is the 6th generation system from Dasa which draws on the company’s experiences from previous systems. Development was undertaken in close cooperation with leading manufacturers of harvesters, forwarders and logging units. The result is a product that takes bucking and mechanised logging to an entirely new level.

After leaving school in 1993 Neil attended the Scottish school of forestry on a basic forestry course. While doing this course he also took part time chainsaw work to make ends meet. After a year at the college Neil then went to Finland for three months attending two different colleges where he gained further experience in operating and maintaining forest machines.

On returning home he started working for various contractors, including G&A Watt and Douglas Timber Harvesting, on

forwarders before progressing to harvesters. Last year Neil decided to go it alone starting up his own company Fraser Timber Harvesting Ltd working for Norbord in the Inverness area.

The site Neil is currently harvesting is mixed with some spruce, rough twisted pine and quite a lot of windblow and dead trees. Neil is achieving roughly 15 m³ per hour in a 0.25m³ size crop with the machine using 11 litres of fuel per hour.

“One of the major assets to this machine is the way it can keep itself level due to the pendulum arms” said Neil. “This system is used while traversing the site and its second nature using the joystick control to keep things level. Another advantage with this system is its ability to sit level going across steep side slopes, where with the powerful crane I can fell the trees and then place them in more accessible areas where I can process them, allowing easier access for the forwarder”.

Although the machine hasn’t come across any very steep climbs so far, Neil feels the hydraulic drive motors will be up to the task if needed.
“With this machine running an upgraded crane and hydraulic system that is usually found on the 580 D, it really is on top of the job. With the smaller Logmax 5000 D head along with the 11 metre reach crane it is a perfect combination for the type of work I do”.

Fuelling up is done at the very front of the machine with an easy to get to hose attachment. Autolube takes care of the base, crane and the pendulum arms. I have no problems with the hose layout”.

Neil was very happy with the storage on the 560. He was one of the few operators who didn’t comment on needing extra storage. “In the front

of the machine there is a slide out tray above the diesel tank which is good for larger tools with additional storage at the front for a toolbox, fuel filling hose, bars and chains etc. Also stored in here is a concentrated 10 litre urea tank, which before being used is diluted with water from a tank in the crane pillar”.

Neil stated that the mixture of xenon and LED lights work really well.

“The cab is comfortable, everything is easy to access the only issue I have had was vibrations coming up through the floor which is all but eradicated as I fitted extra sound proofing. Because the crane is alongside the cab vision is excellent, even looking past the crane on the right hand side causes no problems due to the large side windows.

With the machine chassis levelling with the pendulum arms there is no levelling on the cab itself. For storage there is a compartment above my head and also a pocket on the left hand side of the cab.

Control of the machine is taken care of by the Dasa 6 forester computer which is situated on the driver’s door at the front of the cab. The computer is simple but efficient. It has a touchscreen to alter any settings and is very user friendly and easy to use.

Lighting is taken care of by a lightbar above the front window with additional lights on the side and back of the cab”.

“Strong and Sturdy” were the words Neil used to describe the crane. This Machine is fitted with an upgraded 260 crane that is usually found on the 580 D. “It gives it more power, and with 11 metres of reach, coupled with the Logmax 5000 D head it is more than capable for the work I do.

The hose layout on the crane is generally good, the only issue is the badly protected crane cables down to the head. I have caught these a couple of times but this is probably due to working in rough UK conditions. This problem has been addressed in later machines and the cables are now being housed in a hose. The crane has two lights on the extension hose bracket and one on either side of the crane Pillar”.

“The saw is fast and reliable with no significant bar wear. Because I harvest a lot of windblow I do get chains breaking but this is normally down to the saw getting stuck.

Felling with this head is good. One thing to mention is the rubber mounted plate that is connected to the side/bottom of the saw box. This plate acts as a shock absorber taking out the stress to the head when feeding down to the ground to locate the fell cut position. Its fast and powerful at feeding. I recently finished a really rough Lodgepole pine job and the 2 wheel drive head coped really well with the bent and twisted crop. Although the head is capable of much rougher trees I tend to leave them for the cutter to save stress on the head”.

Neil uses the semi-automatic method of cross-cutting and a manual override when needed.

“As a requirement of the main contractor I calibrate the head every day. The calibration is done with the quick and easy use of the callipers which keeps everything in check and leads to very accurate measuring.

the 1200 hours I have worked so far with the machine. The head is straightforward to grease, the only issue being sticks getting jammed behind the top knife guard’s which hinder access to the greasing points.

When I first got the 560 D I used the Greasing system for lubrication rather than chain oil. The reservoir for the fluid grease system is located on the side of the boom extension bracket. It needed filling twice a day so I switched to the chain oil system which only uses 3 litres of oil a day.

I am pleased with the guarding of the head especially the hydraulic rams which are well protected from debris and tree sap, extending the lifetime of the seals. The hydraulic hose of the rams are also protected by effective guards.

I have had the machine for over a year now but due to being stopped because of Covid-19 I have only done 1200 hours. In this time the overall reliability has been very good. I have replaced two knives which had already been repaired, and replaced a top knife spring these being the only real issues I have had.

I have also had a few leaking rams which is to be expected on a machine of this age. The rams are easily taken off and resealed which I do myself.

Loading the machine is no problem, I drive the machine straight on the low loader and place the head on the neck of the trailer.

“The Eco Log was sourced from Eco Log in Sweden by Scott Burton of SB Forestry. It was covered by a parts warranty for the first Month after I bought it. This came in handy when a solenoid developed a fault on the injection system of the Mercedes engine. It was replaced with a second-hand solenoid. The only other major problem was that one of the pendulum arms failed due to fatigue and had to be replaced with a stronger version on the front of the machine. The one on the other side is due to be replaced in the near future in case it also fails. Apart from the usual run of the mill, burst hoses etc the machine has been very reliable overall considering the hours it has done”.

“Back up for the machine is provided by S B Forestry of Lauder who is the UK Ecolog dealer. I tend to repair most things myself and Scott is always on the end of the phone to offer advice, send parts and a service van will be dispatched if I need it.

Back up for the head is provided by Treetop forestry. The Treetop service vans often pass near to where I am based in Inverness so I can arrange to meet up with them to collect any parts I have ordered.

I carry out all but the most difficult repairs myself and the servicing at 500 and 1000 hour intervals. Servicing is relatively easy with the removal of side panels allowing easy access to the filters etc”.