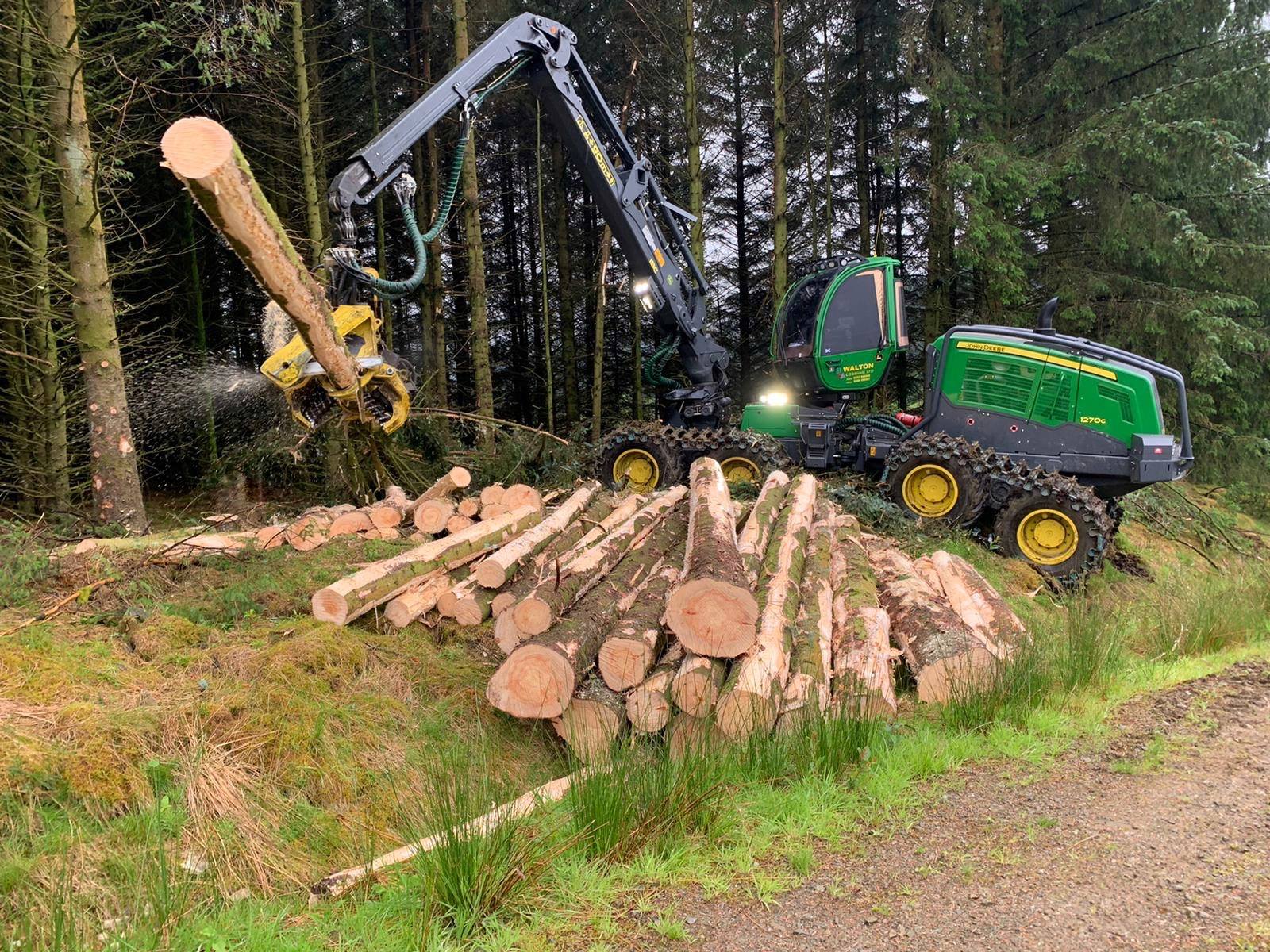 Today we take a look at the John Deere 1270G which is operated by Robbie Robertson of Walton Logging.

The John Deere 1270G is an eight wheel drive harvester and is available with optional IBC crane control. With IBC, the operator controls only the harvester head while the system takes care of the boom’s movement. The operator takes the harvester head to the desired place, sensors recognize the location of the head and the system adjusts boom movements and extension automatically.  The 1270G stands at 2750mm wide with 600 tyres. It has 710mm ground clearance, a steering angle of +/- 44° and weighs between 22,650 and 22900kg depending on the harvesting head. The high-performance engine is a John Deere six cylinder EU Stage V EPA Final Tier 4, with 286hp at 1900rpm with John Deere load sensing, power adjustable double pump system hydraulics.

The crane is a John Deere CH7 with a tilting base and has three reach options from 8.6m to 11.7m; there are six harvesting heads available for this harvester. The machine is fitted with a low noise 160° rotating levelling cabin (side tilt +/- 17°, front/rear tilt 9°) and TimberMatic control, TimberMatic maps and TimberManager systems installed as standard. The TimberMatic control system for John Deere G-Series harvesters includes everything needed for base machine control and monitoring, measuring and bucking in one configurable user interface. The use of just one system makes the operator’s work faster and easier.

Several pressure sensors have been added to TimberMatic, making it possible to adjust most settings from inside the cabin – and even without tools. The pressure sensors make machine adjustments and condition monitoring easier via the machine’s on-board PC:

The operators can mark avoidable or difficult areas on the map, or any other notes from the terrain. The communication between the operators will improve as the data is stored in the system and is not dependent on a person’s memory. The data between the machines is updated through a cloud service.

TimberMatic Maps is a standard feature in new John Deere forest machines and it is available with an upgrade kit for older models. The application requires 4G MTG and HPC15 (XL4) computer.

Robbie left school at 15 and went to college for a year before joining John Deere forestry at Carlisle. After serving a three year engineering  apprenticeship in the workshop he then went on a service van for 18 month. After this he began working for the family company, Walton Logging LTD, where he has been ever since. He began with 18 months on the service van before operating various harvesters up to his current 1270 G.

“Overall the 1270G is extremely reliable” said Robbie. “It has done 1060 hours and apart from a few small warranty issues I haven’t had to stop because of breakdowns. On my current site I am cutting a 0.34m³ crop which is mostly bent and twisted with a lot of multiple stems.

Fuel consumption on this site is 17 litres per hour and production is 21.4m³ per hour.  It will climb a house and to date the transmission has never blown off. It is good on soft ground; the head is fast, accurate and reliable, all in all an all round excellent machine”.

“The frame brake is really good with no real issues. After operating older machines in the past, the new frame brakes are a lot better. I had a drive on a 1270 test machine last year with a prototype frame brake which uses stabilising rams and it was so much better.

These should be installed on future machines. Refuelling is by the quick fit coupling at the back of the machine. The only slight problem is that because of the eight wheels, the back end of the machine is higher. A bit more thought is required when I position the bowser so I can reach the coupling and switch”.

On the whole Robbie says the hose layout is good, the only issue is when the machine steering is on full lock the main feed hoses in the centre of the machine push up and rub on the bracket which causes failure through time. When the machine is at an angle he can feel the vibration of the hoses rubbing.

“The machine is serviced every 750 and 1500 hours” continues Robbie. “John Deere takes care of the 1500 (big) services and Colin and I do the 750 ones. Servicing on this machine is pretty straight forward, the only problem being is with certain fuel filters needing a special tool to remove them, the worst one being so close to the chassis making it impossible to get a filter strap round it”.

Robbie also pointed out that on other manufacturers’ machines, to save dropping the big belly plates, they have smaller access hatches underneath for draining the oil and greasing the propshaft, and he felt this would be a good addition to the 1270G.

Robbie says he could do with more storage, one of his main complaints is there’s nowhere to keep his electric grease gun. A good addition in recent times though is that on the opposite side of the cab from the driver’s door is a compartment for the essential spill kit. Overall Robbie thought that the lighting is very good; the only addition would be to add more lights at the back of the machine which would activate when reversing.

“The cab is really comfortable with everything where it needs to be and with more storage than I actually use. The computer is very easy to use with all the information needed on the work screen and straightforward to see. The vision is brilliant, obviously with the John Deere you have the blind spot with the crane in the middle but other than that it’s excellent. The levelling is really good it is instant and it keeps itself level when driving across the site.

The one thing I feel that would improve it is greater levelling forward and back. Although the lighting is perfectly adequate more lights on the front would be a welcome addition”. The cab greasing is taken care of by two banks of nipples under the cab. These are optional extras with Robbie saying these are well worth the upgrade. This system does away with getting unwanted grease on your head and shoulders when reaching under the cab to grease the standard set up. Crane For the size of the Machine Robbie says the crane power is very good.

“Reach is adequate but I could always do with more. The game changer on this machine is the IBC as it is fast, smooth, precise and powerful” said Robbie.
The hose layout is neat and tidy on the crane with the hoses under the kingpost causing the only notable problem. These hoses are kept out of the way to improve vision, but as Robbie pointed out the downside of this layout are the hoses rubbing together under the kingpost leading to hose failures, which are awkward to replace.

For performance Robbie feels that this supercut saw is now the best on the market.

The downside coming from slightly excessive bar wear. He also says the tensioning could be improved as the chain occasionally runs off the rails. Chain wear is excellent though with chain breaking being an exceptionally rare event. “Felling is generally good” said Robbie.

“Sometimes it is difficult to get the head square on the tree when felling large trees with big toes. When felling with the head at an angle the head loses grip resulting in the saw getting stuck”.

When double cutting to make sure he cuts right through the stem he has to make sure to get the head further round the back of the tree due to the positioning of the saw box. This head is running after market V-TEC feed rollers which Robbie prefers to the standard ones.

The single speed motors give really good torque and grip with excellent delimbing. As with most heads, feeding on large stems is a problem with grip. The machine has slow feeding and feed limitation options but Robbie says a proportional feed would be a good addition.

Robbie uses sequence control to start the tree then uses manual saw for crosscutting. Measuring is really good with calibration via callipers keeping everything accurate.

“The hose layout is shocking with lots of hoses sticking out which are prone to getting caught” continues Robbie. “They are a nightmare to change although it has been improved by putting a join in one of the feed roller hoses. This means it isn’t necessary to take the head cover off to change it. Some of the hoses under the head cover are awkward to change, with having to take other hoses off to get to the burst ones”.

Another thing Robbie commented on was hose quality maybe isn’t as good on new machines compared to the replacement hoses he uses.

The head is relatively easy to grease. The two issues with greasing is the access to the two nipples on the top knives which are really awkward to get to – a hole drilled through the chassis would be an easy solution to this problem. Another problem is the nipple behind the measuring wheel which is sometimes difficult to get at due to sticks getting jammed behind the measuring wheel electric hose”.

Chain oil usage between 5 and 10 litres a day.

Easy to put on Reliability

“It is very reliable considering the job it does. One problem though is the measuring wheel arm. Although this machine is only eight months old I feel there is excessive wear on the arm”.
The only other point mentioned was feed roller hoses failing.

“Excellent Back up from John Deere” said Robbie. “They are always at the end of the phone with advice and a van is always sent out when needed. John Deere do regular tune ups on the machines and there is a noticeable improvement each time they are done.