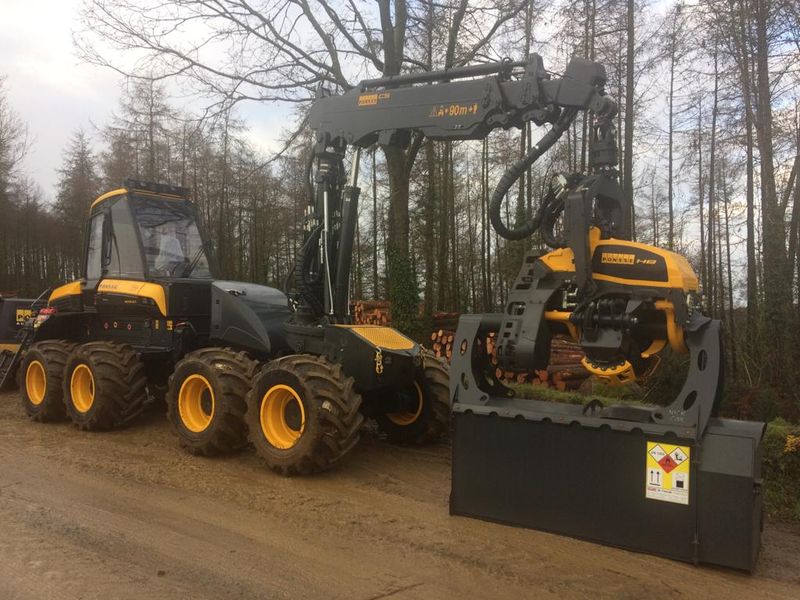 Today we take a look at the Ponsse Ergo which is operated by Simon Hern of Cox Forestry.

The Ponsse Ergo is available in six or eight wheel drive and has the option of Ponsse’s proprietary Active Frame cabin suspension system which ensures that lateral swings affecting the driver are eliminated.

The Ergo stands at between 2630 and 3085 mm. It has 600 mm ground clearance, and has a typical weight of 21,500g. It is fitted with a Mercedes Benz EU Stage V/Tier 4 Final 286hp Engine with advanced transmission for maximum machine control when working ion uneven and steep ground.

Ponsse’s Opti information systems are designed to be user-friendly. Therefore, their design takes into account the wishes of drivers and the requirements of forest companies. Ponsse Opti has a system for forestry machinery as well as logging control and monitoring. With the easy-to-use programs of the Opti system, controlling, adjusting, managing the application files and calibrating the machine are convenient.

The Ponsse Manager connects forest machines to an information network. PONSSE Manager, the modern digitalization platform for forest machines, enables comprehensive services now and in the future. The easy-to-use tool offers assistance in harvesting equipment maintenance and work planning, along with providing access to extensive reporting.

Simon’s introduction to forestry started at an early age. He spent as much time as he could going to work with his father who was a contractor for Fountain forestry. An early indication to his future career was his enthusiasm to, “have a go” any time his father would have time to let him take the controls of the Massey Ferguson 390 tractor.

After leaving school at 16 he went on to a YTS scheme with Fountain forestry learning about all aspects of forestry. After this he started hand felling before progressing on to the winch tractor at 17, where he stayed for another three years. At 20 he spent two year on a forwarder for Grosvenor forestry before moving on to Kleen Kutt forestry where he stayed for 16 years. He moved to his current employer Cox Forestry after this and has been on Ponsse Ergo Harvesters for the last 4 years.

Nick Cox started Cox Forestry in 1993 working for Euroforest, with 95 % of their work still coming from Euroforest. First up was a County tractor with a Botex roof mount crane, trailer and a gang of hand cutters. He then progressed to a JCB 814 with a Ponsse head. Nick has stuck with the Ponsse brand ever since which has included ownership of 8 Ergo’s, the most recent one arriving the week before Christmas.

“The Ergo handles everything from first thinning’s to large clear fells making it the best on the market for our needs”.

Simon is currently on a difficult site consisting of a poor larch crop. The majority of the trees are being felled down to him off a bank-side by a cutter. The average tree size is 0.4m³ and he is averaging 13m³ per hour and using 15.8 litres of fuel per hour.

Stability on the Ergo is taken care of with a ram on either side of the chassis, which Simon said works really well.

“Refuelling on the machine is easily accessed behind the cab access step, with both the fuel connection and Ad blue tank being located at this point. Hose layout in the centre joint was one of the main bugbears of the recently departed Ergo with around 10 hoses failing in the 3 years of having the machine. The only good point of this problem is that with the box above the hoses being on a pivot, and with help from the forwarder it is easily moved out of the way to allow good access to the hoses.

Storage is adequate. The storage area next to the exhaust has been cut by 50 % due to a new emissions system. However as the machine doesn’t come with a urea system there is ample storage where the tank would normally be in front of the crane. This compartment isn’t waterproof and is prone to debris getting in. Care has to be taken placing the chain oil, bars, chains and hoses in it to make sure they stay clean”.

“As the seat in the Ergo cab turns around the cab is very roomy with space for a passenger if needed. The seat itself gives sideways levelling which is operated manually. The downside of this is the seat actually touches the side of the cab on steeper side slopes.

One of the highlights of this latest machine is the addition of a night heater which is a first for me. I look forward to a nice warm cab and clear windows in the mornings. Vision is excellent with the long windows and narrow pillars. The only downside I have with vision is, as the crane is towards the front of the machine, it is a little difficult to judge in first thinning’s, but second thinning’s and clear fells aren’t a problem. The computer on the ergo is straightforward to use with settings changes being done by touch-screen and a keyboard.

With storage under the operator’s seat and also under the passenger’s seat it is more than adequate. The usual all round LED’s are excellent.

The only thing I feel would be a good addition to the Ergo is central locking with the function also operating selected lights that would illuminate my path up to the machine on dark mornings/nights”.

The crane on the Ergo is the C5 telescopic version which is best suited to the work Cox Forestry does. “Small first thinning’s jobs right up to large clear fell jobs where 4 m³ trees aren’t uncommon. The telescopic crane is the making of this machine. I wouldn’t be so keen to use the parallel crane option. The two motors provide excellent slew power and along with a strong main lift and good reach makes for a very good crane. The only downside is that there is a little more maintenance to do than on normal cranes. This is due to the extension chains needing regular adjustment to keep things running smoothly.

Another plus point on this crane is its ability to easily fold away lower than the cab, which makes moving on the road, from site to site, a much easier task. The hose layout on the crane is excellent too, including the internal hoses down the boom.

Greasing for the slew ring is done via four points at the crane base. The rest of the crane is greased at various points which are easily accessible. Once a fortnight I grease the rollers for the telescopic boom which is also relatively straight forward. Lighting under the main boom is good”.

As this new machine was fitted with the H8 head, and Simon had only one day operating the new harvester before being interviewed, the questions he answered were mainly about the H7 head.

“The saw motor set up has been difficult to get the correct combination of chain speed and feed force of the bar, which has caused some chain snap. The improved saw on the H8 will rectify this.

Felling with the head is good with Simon telling me of a setting which is new to him which only opens the head up in relation to the average tree size of the last 100 trees. As the head is never fully open it is a lot easier to manoeuvre between the trees in first thinning’s.

As Simon had only operated the machine for a day, he couldn’t say if the feed was much better. But he did add how impressive the H7 was in the rougher trees and how well it has served him in the past. “One of the changes on the new head are the plated spike feed rollers which have a cleaning system to stop debris building up. I am not sure about this set up as when the head hits a bend in the tree, the feed rollers seem to do a lot of damage to the stem while spinning. I am not convinced they are any better than the original rollers on the H7.

Concentration has to be kept up while using the automatic saw with Simon able to override the system to avoid cutting substandard products.

“With a choice of single or double measuring wheel, we opt for the single version which gives excellent measuring. Lengths and diameters are checked daily with calibration being done manually as and when needed but it is a doddle to do. With the Knives floating and the head tilted up all the greasing points are accessible without having to move the head. The only downside being that the grease is quite hard to pump into the nipples on the H7 even with a Milwaukee grease gun. With the new H8 head I am hoping this problem to be a thing of the past.

Simons only niggle with the H7 head was the hose manifold on the tilt frame where he says the mounting pin wears then breaks causing hose failure, hopefully this should have been rectified on the H8 with a bigger stronger pin.

Other than the above issue, reliability was described as overall very good, with feed roller hoses needing replacing about every four months and the measuring wheel bearing every 12 months being the only other things Simon commented on.

“Folding down the light bar on the cab and supporting the head with chains is all that needs done to prepare the machine for transportation, after this it’s just a case of driving the machine on”.

“Apart from the hoses in the centre joint, covered elsewhere, the only other problem has been the header tank on the cooling system. The tank has been replaced three times because of leaks, which Ponsse have rectified. The new harvester has a re vamped system which I have been assured will cure the problem. Other than the above problems and the usual run of the mill issues we have been more than pleased with the overall reliability of the Ergo”.

“The machine is on a service contract with Ponsse UK. Cox forestry take care of the fairly straight forward 750 hour service, but the main 1500 hour services are done by Ponsse. Ponsse service engineer Chris Davies, who is based in Wales, takes care of 99% of the work at Cox Forestry, even though Chris has about a four hour drive from home, he is usually on site by 7 in the morning.
Cox forestry have used Ponsse for years and their back up is excellent. They use DPD next day delivery who are very good. The parts are sent direct to the operator’s respective homes when needed”.