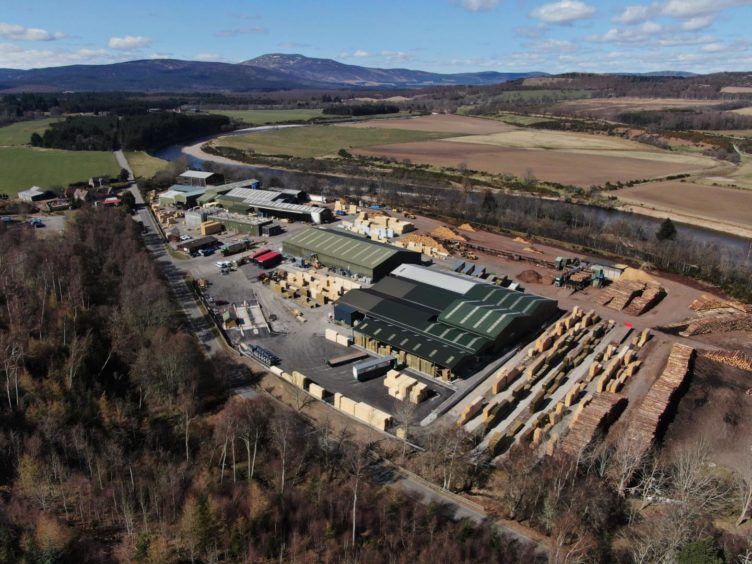 On a stormy night in January 1953 – laterknown as The Muckle Storm – trees crashed to the ground in their tens of thousands and across the North East, many mobile sawmills were drafted in to process the windblown timber over subsequent years. James Jones & Sons had cut wood in these mobile sawmills, on Glen Tanar and the other great Deeside estates, for decades. In the aftermath of The Great Windblow, the decision was taken to build the first permanent sawmill in the area – on the banks of the Dee at Burnroot, near Aboyne. Almost 60 years after it was built in 1962, the Burnroot sawmill is still there by the bend in the river – but it is a very different beast.

First modernised in 1989 with top-range Scandinavian equipment, it underwent a total refurbishment between 2018 and 2020, which has seen a 30% uplift in production from the site and included the upgrade of the biomass boiler to meet the highest environmental standards.

An investment by James Jones & Sons of over 9 million pounds has created one of the most advanced sawmills in the country that directly supports the livelihoods of over 55 people, in increasingly highly-skilled jobs and drawn almost exclusively from the local area, around Aboyne, Ballater and Torphins.

As the biggest private employer in that part of rural Deeside and when added to the Group’s North operations at Mosstodloch in Moray, Kirriemuir in Angus and its I-Joist facility at Forres, James Jones & Sons directly employs almost 250 people in the North East of Scotland.

Some of the regular contractors, who harvest about one-third of the timber for the Aboyne and other mills are the third generation supplying the company with timber. James Jones & Sons is a close-knit family business in all respects. Founded by James Jones in 1838, it has a proud history, which includes supplying timber for Captain Scott’s legendary Antarctic exploration vessel Discovery and as the largest privately owned sawmiller in Scotland.

With the current and fifth generation family Chairman, Tom Bruce-Jones, staff loyalty is immense across the group and includes a number of Aboyne employees who have been with the company for over 40 years, and many more not far behind.

The mill is ingrained in the fabric of North-East Scotland, with timber taken for decades from the great forests in Deeside, Donside and across the North East. Timber from the public forest estate, formally the Forestry Commission and now Forestry & Land Scotland initially supplied about two-thirds of the mills timber requirement – from Fetteresso Forest near Stonehaven, Buinach in Strathdon and the immense Clashindarroch, south-west of Huntly.

Over time, there has been less reliance on the public forests which supported the industry so well through initial developments. Today about 60% of the timber comes from private estates and forest owners such as Seafield Estate, Candacraig Estate and Glen Tanar as well as forest management companies, including Scottish Woodlands, RTS and Euroforest. Aberdeenshire and Moray grow some of the very best spruce, and with the most advanced equipment at Aboyne processes sawn timber to as high quality as that imported from Scandinavia. With 80% of the UK’s wood being imported, this is a valued and essential resource.

The Burnroot sawmill is at the cutting-edge (literally) of a vibrant, growing industry. Aboyne’s work has moved from railway sleepers and pit-props in the 80’s to cutting wood primarily for the construction industry today. Carcassing, or building timber is about 60% of its output, with 25% produced for pallet manufacture and about 15% for domestic fencing.

Pallet wood has been increasingly vital for moving goods during the pandemic, while the increased use of timber in construction is essential to a sustainable future. Around 85% of new Scottish homes are now built with timber frames, and as the construction industry requires longer lengths of timber and more accurate sawing, the mill at Aboyne is perfectly placed to deliver this within Scotland.

The investment in Aboyne over recent years can be likened to restoring a vintage car – as well as refurbishing the exterior of the mill, modifications under the bonnet involved installing modern technology demanded by 21st century sawmilling. Many people who don’t know the industry are surprised, and impressed, by the hi-tech nature of modern sawmilling and the levels of skill demanded from the operators and engineers.

Technology is crucial for the accuracy the market demands, and the saw line at Aboyne can transform one large log into 24 smaller pieces in a single pass. Sawmills are a zero waste activity with sawn timber going to market, chips and sawdust going to OSB and chipboard and bark to horticulture. Any remaining residues are used to fire the new biomass boiler to heat kilns for timber drying.

The wood we cut goes increasingly to Scottish markets, including large building merchants like Jewson and MKM but also to smaller merchants all across the region. The focus is very much on locally sourced roundwood timber and for sawn timber and other products to be sold in the North East wherever possible

The future looks very positive. The Burnroot sawmill is part of a thriving regional – and national – forestry and wood processing industry. The recent investment not only safeguards a large number of direct and indirect jobs in the region and creates significant economic growth but ensures the delivery of our only true naturally renewable resource to customers in the North East.

Timber demand is increasing year on year as the understanding grows that we cannot continue to build with brick, block, concrete and steel if we are to meet our climate change objectives.

One thought on “Burnroot Sawmill: 60 Years After The Muckle Storm”