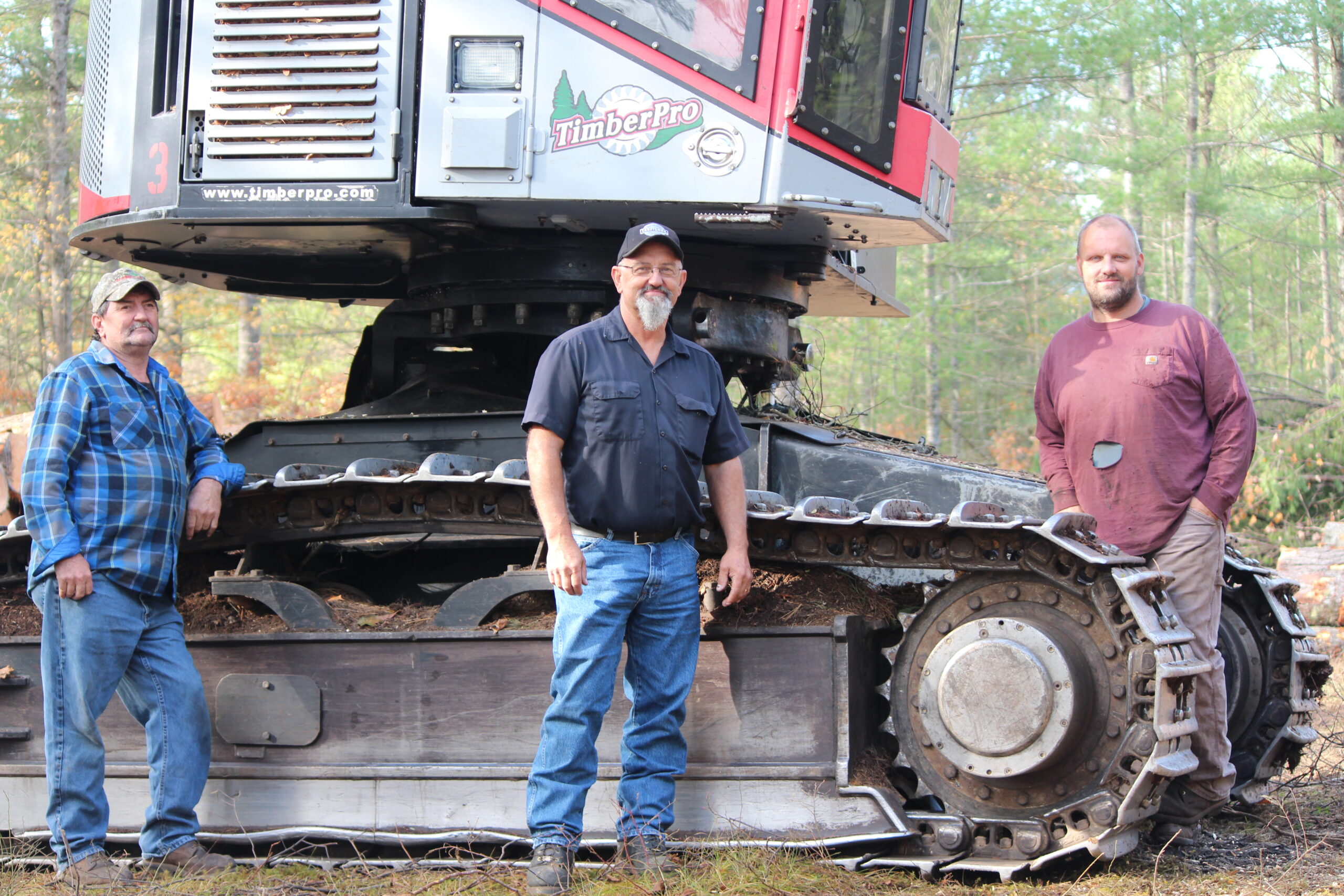 Every logging crew has its own story, and the crew that moves the wood at Eastman Forest Products, Inc. is no exception. By Wendy Farrand

This small family run business has found its sweet spot when it comes to moving timber. Most logging crews call each other family, but this three man crew, two brothers, Charles and Alfred Eastman, along with son-in-law. Mike Doremus, call each other family because they are family. It is evident to anyone who witnesses their relationship with each other, that they really have it figured out. Mastering how to get it done in the most efficient and enjoyable way, where flexibility and family are just as important, if not more important, than logging. Maybe, just maybe, that is their secret sauce for business success. All three family members work hard, and are totally
engaged in their jobs. For what some might see as a challenge, when running a family business, they have turned into an asset. Flexibility and a more relaxed structure seem to really work in their favor for getting the forest products to market.

These burly second generation loggers, Charles and Alfred Jr. grew up in the woods working right alongside of their logging father Alfred Eastman Sr. “My dad logged his whole life, we just grew up in it,” said Alfred. When the time came to pick their career path after high school, it just seemed natural for both brothers to wind up back in the woods to work alongside their Dad. That’s where they stayed, honing their logging skills until Alfred Jr. took the business over.

Their father started his career, like many loggers of his time, in the woods with a chainsaw and horses. Then he traded his team of horses for a bulldozer, and eventually replaced the bulldozer with a cable skidder. That whole tree harvest system that he created was the harvest system the boys learned to log in. This was the system they worked with every day, and it’s all they know and love. They continued utilizing a whole tree operation, because it feels like the most efficient harvest system. Over the years, Eastman Forest Products, Inc. has grown and strengthens this system by adding additional pieces, and upgrading to grapple skidders in an effort to minimize their physical workload.

A whole tree harvesting system is a system where the entire tree is harvested and every single portion of the tree is utilized. The tree is cut at the stump, pulled to the landing where it’s processed into the different products that will bring the landowner the best return on their timber
dollars. The trees are slashed and separated out into the different products
on the landing. The tree tops are fed into the chipper along with scrappy looking whole trees to be converted into biomass, for delivery to the mill where a renewable resource is transformed into electricity, or other energy sources

The Eastman brothers, since the days of working in the woods with their Dad, have introduced some new pieces of equipment to the mix, as well as an additional crew member, Mike who happily married into this logging family. Gone are the days of cable skidders on the job. They now own a nice shiny green John Deere 748 grapple skidder. Chainsaws have been replaced by a Timberpro 735 feller buncher. A Morbark 30-36 whole tree chipper sits in its spot on the landing right next to a new Rotobec 960 yard loader
with a slasher bunk to process the trees once they are delivered from the woods. The chipper is utilized on almost every job, because “most landowners want chipping for aesthetics,” admits Alfred.

Son-in-law Mike is the first to appear on the job to clear the landing and start the harvesting process with his Timberpro 735. Anyone who takes a peek at his stumps along the carefully laid out trails, can see that he is truly a perfectionist when it comes to slinging his Quadco 360 22C disc saw felling head. The stumps are about as close to the ground as a logger could possibly get before hitting dirt. Pride of a job well done is evident throughout this harvest. Mike lays down his hitches in a tidy clump strategically placing them tops to butts, creating a neat row of trees along the woodland trails. He loves the solitude of operating the feller buncher
alone in the woods, “nobody bothers you and you can go at your own pace.”

Pace is key to this company’s flexibility. If Mike works extra hard to get his wood cut and laid out, he can take time for an important family event, school function, or daytime activity. This benefit is true for every crew member. “As a family, there are very few school functions we miss.” voices Albert proudly. “We are about as flexible as we can be.” There is an innate respect for life balance that seems to strengthen their work ethic. Happy loggers are more productive loggers,and these guys seem to be one very happy bunch.

After all the wood is neatly laid down by MIke and his buncher, Charles moves in to attack the rows upon rows of hitches with his John Deere grapple skidder. Securing the grapple gently around each bunch, he drags the hitches down the winding trails through the streaks of morning sunlight. Chains clanging in a melodic way until he comes to a stop at the landing. Backing up, he lays the hitch within his brother’s reach for sorting. As he heads back to the woods, he grabs a load of slash to bring back to add additional nutrients to the soil Charles explains that if he has a wet spot, or a rut to fill, he will strategically drop the slash where it is needed most, to enhance his skid trails, or to protect soil productivity.

On the landing Albert sorts his delivery with his new Rotobec Evolution 960 yard crane. He gently lifts the trees high and wide to lay them in the bunk for processing. As the slasher saw bites into the tree, it flings sawdust through the air high above the screech of the saw. Thought and knowledge goes into this process as he determines the specs for each log, and where they will go. Logs are cut and sorted, and placed in piles based on destination, while the tops and culls are fed into the Morbark whole tree chipper. The bright yellow Rotobec Evolution 960 yard crane has attracted a lot of attention from his peers. When asked how he likes it, he does, he says, “it has a little smoother technology, but it only has 800 hours on it.” Then brother Charles interjects with a laugh, “Come back and ask us after it has 8000 hours, and see what we say then!” The choice to buy a brand new crane was an easy one for a crew that usually purchases “experienced” equipment, as Alfred calls it. There aren’t that many used cranes around that are in good shape, and he liked the fact that this new Rotobec has the old emission style, “We don’t have to deal with diesel exhaust fluid (DEF) and that is a plus.”

For trucking they own their own Peterbilt tractor, a lowboy trailer and chip trailer. Biomass chips are hauled to various mills, depending on the
location of the job and quotas. “We are not high production, so we like to maintain our versatility based on location,” says Alfred. The forester
they work with on a regular basis trucks the roundwood to various sources. He also admits it may not be cost effective to move their own equipment, but it certainly is the most efficient. As a small crew, to hire someone and wait to be fit into their busy schedule can eat into production time. Thus, he feels it is the most efficient way, from his perspective, to keep the wood flowing. If there is a breakdown, the equipment in need of repair can be
quickly moved to the shop by a member of their own crew. With this process, and son-in-law Mike’s mechanical ability, breakdowns usually
get sorted out in a very quick fashion.

Mike can also operate every piece of equipment efficiently, but shines most when he’s tucked inside his feller buncher. Alfred explains Mike’s above verage operating skills, “I lay it to birthdays, he’s the younger guy, so he catches on a little quicker.”

The rest of the team can move equipment, and maybe operate it some, but not to the level of the youngest of the crew for he can efficiently operate every piece of equipment.

When faced with a breakdown, they all stop to deal with it. Tackling the problem at hand, in the most efficient way, based on individual workloads or where they are in the process. If the chipper knives need changing, whoever is experiencing a lull at the time, changes them. It just works by utilizing everyone’s time in the most effective way, while keeping the production up. Having a level playing field among crew members seems to improve production and efficiency.

They all live quite close to each other, just under a mile and a half. Making that just about a stone’s throw away from the shop where they hold a
formal meeting at the end of every workday. It’s an important time where they focus on communication in order

to share issues and successes from the woods. This time well spent, leads to solutions or innovations for how they can make the next day even better. That meeting is mandatory, unless someone is running for parts, or there is an important school or family function. Understanding that communication is key to success when working in the woods, or any business for that matter, keeps this family going strong in the best way possible.

This neat little harvesting team of Certified Logging Professionals moves
along like a fine tuned machine. It seems after working each day together for the past 26 years has made them stronger as a crew. They are just one tight knit family that finds working hard together, as well as playing hard together, strengthens the trust that they have between each other. Void of any set responsibilities, they just seem to always get things done. No one is over anyone else, they are a team in every sense of the word.

They all agree that family will give it a little more, and push a little harder
for the good of them all. “There is really no bosses, my name’s on the paperwork, that’s all,” smiles Alfred, “cuz we all know what we got to do, we all know that our livelihood is influenced by how we function, so we all do what needs to be done. That’s how that works.”