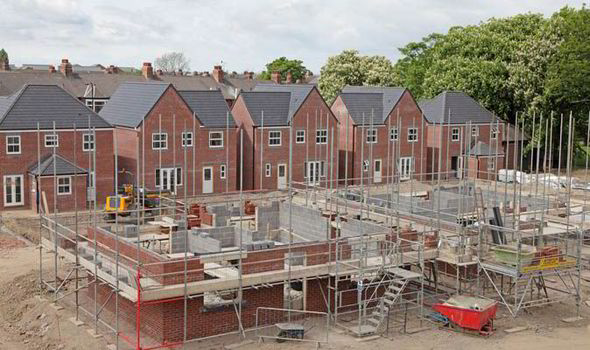 A potential barrier in the road to reaching net zero targets

Following the recent reporting of the UK Government’s decision to reduce the height of timber framed buildings from six storeys to four, Angus Mcfarlane, General Manager at James Jones & Sons Timber Systems Division, considers the impact such a decision could have on current environmental and new-build targets and how it contradicts the government’s calls for ‘carbon neutral’ homes.

A viewpoint that is shared by the Structural Timber Association (STA), who has recently released a statement criticising the plans opposing the advice to increase timber in construction. As active members of the STA, we fully support its findings (which are outlined below) and concur that these contradictions around other government advice to reduce carbon emissions flies in the face of the support that it has shown for off-site manufacturing.

With the Government’s promise to build 300,000 new homes per year to address the current housing shortage, combined with the milestones set out in the Zero Carbon Homes agenda as the government calls for ‘carbon neutral’ homes, timber has become a prime construction material of choice as it causes considerably less environmental burden than its less sustainable counterparts such as concrete or steel.

These recent government initiatives have also encouraged the use of Modern Methods of Construction (MMC) and Off-Site Manufacture (OSM) within the housebuilding industry. It’s believed this has contributed to the existing popularity of specification of the use of timber-based systems, as it lends itself well to both construction methods, allowing faster on-site builds and can also be engineered and pre-fabricated in the factory.

Timber possesses many technical, installation, economic and environmental benefits, making it the specification of choice in both modern and traditional housebuilding methods.

James Jones & Sons also agree with the STA that a blanket ban that is not based on test evidence or scientific fact could have severe environmental implications in the future.

The report issued by the STA is below –

The Government’s recent consultation on extending the ban on combustible materials to more building types and lowering the height restriction in England from 18m to 11m closed on 25 May. Andrew Carpenter, Chief Executive of the Structural Timber Association (STA) discusses how this ruling if adopted will severely inhibit our ability to decarbonise the UK construction industry.

In late May Roger Harrabin reported on BBC News that the Government is planning to reduce the maximum height of timber framed buildings from six storeys to four to reduce fire risk. Harrabin rightly pointed out that this action would contradict other advice to increase timber construction because trees lock up climate-heating carbon emissions.

But this will not only totally contradict other government advice to reduce carbon emissions but flies in the face of the support that it has shown for offsite manufacturing to deliver the much needed housing – the most proven of which are timber based systems.

It is clear that the UK Government is out of step with the approach being taken by leading economies in Europe as evidenced by the actions of President Macron – he has ruled that all new publicly funded buildings in France should be delivered from at least 50% timber or other natural materials by 2022. Another study from Germany’s Potsdam Institute found that a global boom in wood buildings could lock in up to 700 million tons of carbon a year. And can only agree with the head of the Committee on Climate Change, Chris Stark when he said: ‘Timber buildings can be tall and safe. Displacing cement, brick and steel with wood means more than double the carbon savings in buildings overall.

The STA and other timber trade bodies say the Government in England has misunderstood the science behind timber construction. A blanket ban that is not based on building physics, test evidence or scientific facts is seen as a quick fix and as a result, the UK could experience far reaching implications for decades to come. Climate change is not some abstract concept, if not dramatically addressed it will be catastrophic and the biggest crisis of our time.

The Government’s response to climate change has been to set net zero carbon targets by 2050 but there is no ‘road map’ to navigate this journey if the most sustainable and replenishable of all building products, is potentially banned. With as much as 7% of all global CO2 emissions coming from other less sustainable construction technologies, it is difficult to see how these targets will ever be met if these restrictions come into force.

The blanket banning of products does not address the Hackitt Review findings for more accountability and responsibility of how buildings are constructed. Nor does banning products improve build quality or clarify roles and responsibilities in the decision-making process. I could go on, but the point is made. Height restrictions are not a measurement of safety. Poor design results in inferior and not necessarily safe buildings – regardless of the technology from which they are constructed.

The lack of clarity as to what the ban applies to is creating confusion and the STA and our members firmly believe that any extension to the current 18m restriction should focus on the external cladding and not the structural wall itself. We will only support this height restriction on the proviso that Building Regulations replicate the Scottish model where 18m is still acceptable when supported by evidence of non-combustible cladding and well-designed fire management systems. These views together with robust test evidence has been reflected in the STA’s response to the Ministry of Housing, Communities & Local Government (MHCLG) consultation.

As part of their continual development programme, the STA has been collaborating with the Construction Scotland Innovation Centre, the University of Edinburgh and BRE to produce fire safety in use guidance for timber frame buildings. Fire safety in use effects all forms of construction. All buildings must be designed to comply with the functional protocols of the Building Regulations for fire safety requirements, as a minimum standard.

The STA has invested in an industry leading fire in use research project to test and prove commonly used timber frame wall, floor and roof make ups used in the UK marketplace.

The output of this research, a pattern book of EN tested systems, is believed to be the first of its kind in the UK timber frame sector. This research now forms part of the STA’s best practice guidance and is free to download from: www.structuraltimber.co.uk/links/research-document…

Game Fair 2021: A Glimpse Of Normality

A good example of a professional forwarder operator who takes great pride in his work ... See MoreSee Less