Seed drone test-bed at Rest and Be Thankful 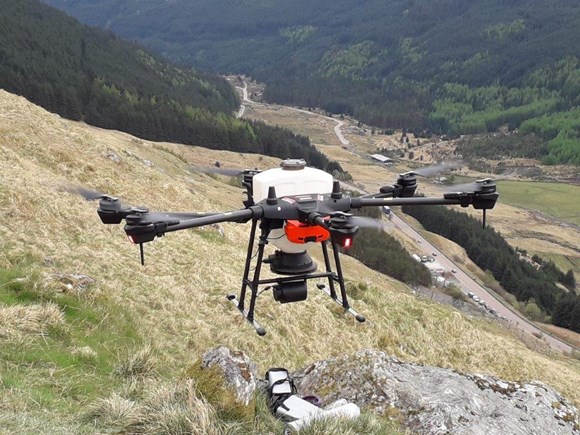 Forestry and Land Scotland has tested the viability of using drones to plant tree seed on the hillside above the A83 in Glen Croe.

The trial was carried out in March as part of FLS’ contribution to the partnership with Transport Scotland that aims to reduce the number of serious landslips that close the road up to the Rest and Be Thankful.

Planting native species of trees that have been sourced from the local area will help to bind the slope and make it more resilient to the impact of heavy rainfall.

James Hand, FLS’ Operations Forester who is overseeing the planting, said; “Using drones to plant trees is quite common in north America and parts of Europe but as far as we are aware it’s new to the UK.

“The benefits of using a drone are that it is quicker and more able to scatter seeds on sites that people would find it hard – or even dangerous – to work on.

“This first trial was about scattering seeds and determining how fast and high to fly and still achieve the dispersal that we want. It went very well and it’s now a matter of waiting to see how many seedlings emerge.

“Next year we plan to step up the trial and use a drone with a gravity fed system to drop  pellets of seed, containing a nutrient gel, into the soil and exposed mineral slopes. The gel packets should increase the likelihood of the seeds germinating and growing.

“If the technology and the technique both work, this could be of significant benefit when we look at increasing the resilience of other sites that are at risk from the changing climate.”

The trial saw 20kg of tree seeds dispersed over an 6ha area, over a 2 day period.

The Rest and Be Thankful site will now be monitored until next spring, when the second trial is due to take place.