The Day We Caught A Bigfoot

Hohenloher Spezial-Maschinenbau GmbH & Co. KG, have been producing forestry machines since 1967, at their headquarters in Neu-Kupfer, after moving from their original factory in Waldenburg in 1995.

In 2005 they opened their second factory in Wolfegg, where the complete range of Forwarders, Skidders and Combi Machines are manufactured. HSM produce forestry machines which are able to harvest and extract timber on all types of terrain safely and efficiently; wet boggy flatlands are no problem for their low ground pressure machines and extremely steep mountainsides are worked with their “State Of The Art Steep Slope Technology”. They have a full complement of different sized machines which are capable of working in small first thinnings to large clear-fells and they manufacture around 120 machines each year and all the machines are made to order. The company is fully focused on supplying customers with what they want as opposed to what HSM think they should have, even down to your choice of colour, with a usual delivery time of six months from the date of your order.

I have been a big fan of the build quality and attention to detail of HSM Machines for a long time, so when Patrick Preusch invited me to visit them in Wolfegg, Southern Germany, it was an opportunity I really couldn’t miss.

We arrived in the morning and Patrick had arranged a trip to a local forest to see an HSM 208F 12 tonne capacity Bigfoot Forwarder in action. It was a mature, mixed species forest with some Scots Pine making me feel quite at home. Patrick said more hardwoods are being replanted than conifers as they are much more stable in climate change as well as being a lot more valuable; good oak fetches about €1000 per cubic metre and is used for making furniture and barrels.

The forest was being harvested by the state owned Landesbetrieb Forst BW and Forwarder Operator Klaus Metzler. Once he found out that I was a fellow forwarder operator he was more than happy to show me his machine and let me have a go; mind you, after two minutes it looked like he regretted his decision as he had a look of complete horror on his face as the rotator and grab were, for me, back to front, which made me look like a right plonker.  After explaining what was wrong Klaus changed a few settings on the computer and, once he realised his machine wouldn’t be destroyed, was all smiles again.

The forwarder has the capacity to carry 12 tonnes of timber and was able to carry two bunks of 3m produce with ease. The sliding back bolster is a good idea as it gives a bit of extra length, making loading on uphill extraction a lot easier. The vision and the control layout were well thought out with all the essential knobs and dials within easy reach and simple to use. This forwarder is fitted with a Palfinger 120F loader (other loaders are available) and is strong and smooth with a good 10.2m reach. Access to all the cooling radiators is simple via the front grill; all are on individual hinges making it a two minute job to give them a good clean out in the hot weather. There are also lots of places for storing tools, hydraulic hoses and other essentials which are really handy when you are a few kilometres away from your site safe on a cold wet day!

HSM had to overcome two major obstacles as Germany has very strict regulations regarding Environmental Damage when harvesting timber. First, they needed to manufacture a machine that was not wider than 3m so it could be driven on the public highway; second, it also had to have especially low ground pressure so it could keep ground damage/soil compaction toacceptable levels.

To overcome this they engaged the help of NAF engineering, who were able to make narrower bogies so that HSM could fit 940mm wheels and tyres onto the harvesters and forwarders whilst still keeping them within the 3m width for driving on the highway. For extremely wet conditions 1.4m wide flotation tracks can be fitted, resulting in an even greater reduction of ground pressure.

The forwarder has a two speed NAF transfer gearbox; the low gear gives a range between 0 and 14 km/hr for off road driving and the high gear provides a road speed of up to 30 km/hr for moving from site to site.

Some of the more clever features on the forwarder are the hydraulic lifts on the front and rear bogies, keeping damage to the forest road to a minimum when having to make a severe turn to gain access to the thinning racks. The crane base is able to tilt from -5 to +26 degrees, therefore reducing the pressure on the slewing gear and making the loader much easier and safer to use on steep ground.

After saying auf Wiedersehen to Klaus we made our way back to the factory in Wolfegg via a nice lunch stop at a local restaurant. Patrick then gave me a guided tour of the production line where there was a good selection of Forwarders and Skidders at different stages of assembly. I realised immediately that there was no way they would ever employ me as everywhere was spotlessly clean and tidy with nothing lying about on the floor. Every machine is assembled from start to finish by a group of fitters who are responsible for the quality of the product before being subjected to a final acceptance test by a highly qualified member of staff from head office prior to delivery.  HSM’s biggest sales at the moment are in Central Europe where they sold their 200th machine in France in June, but they now have partners covering the North American and Canadian markets.

My one regret is that I never had the opportunity to operate an HSM professionally but it seems to me we will be seeing more and more of HSM in the coming years if they continue their current progress.

Thanks to Patrick and Klaus for a great day. 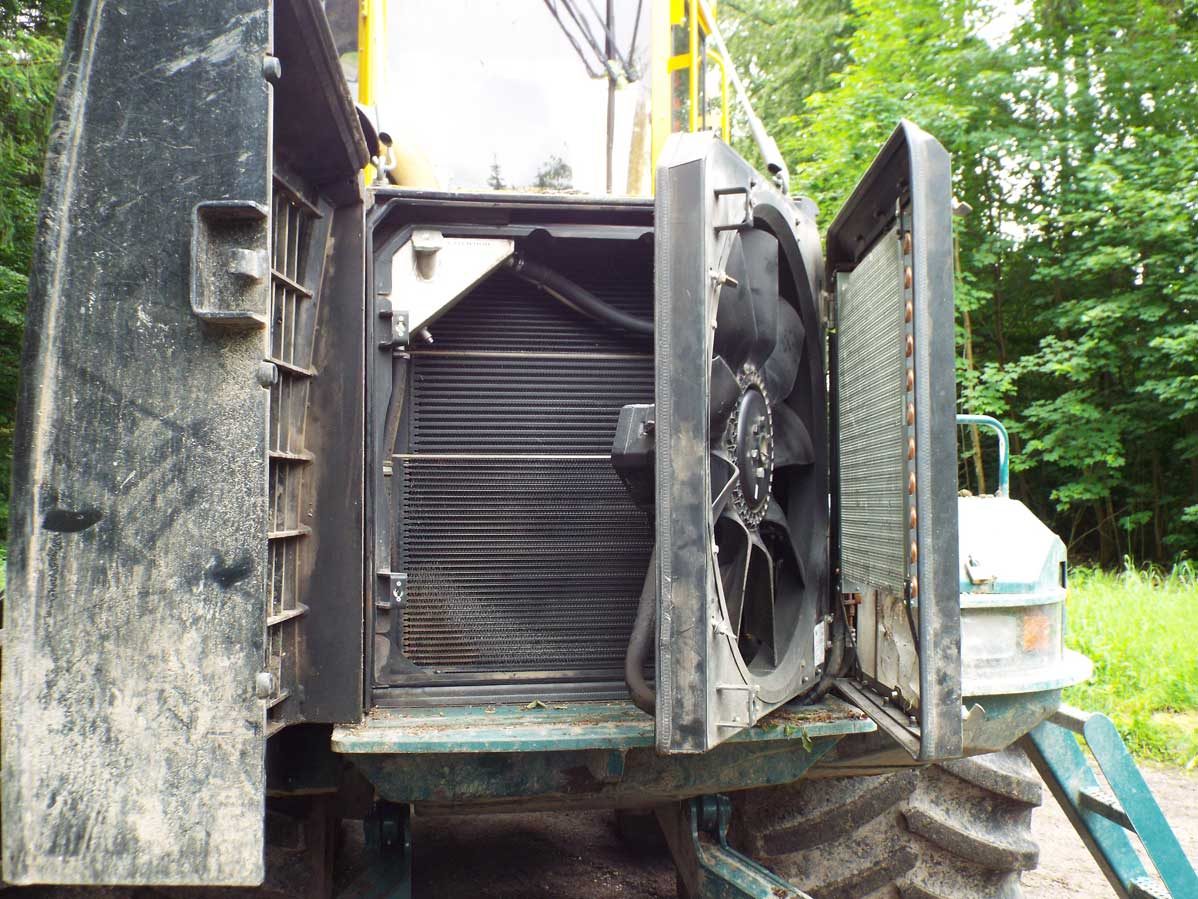 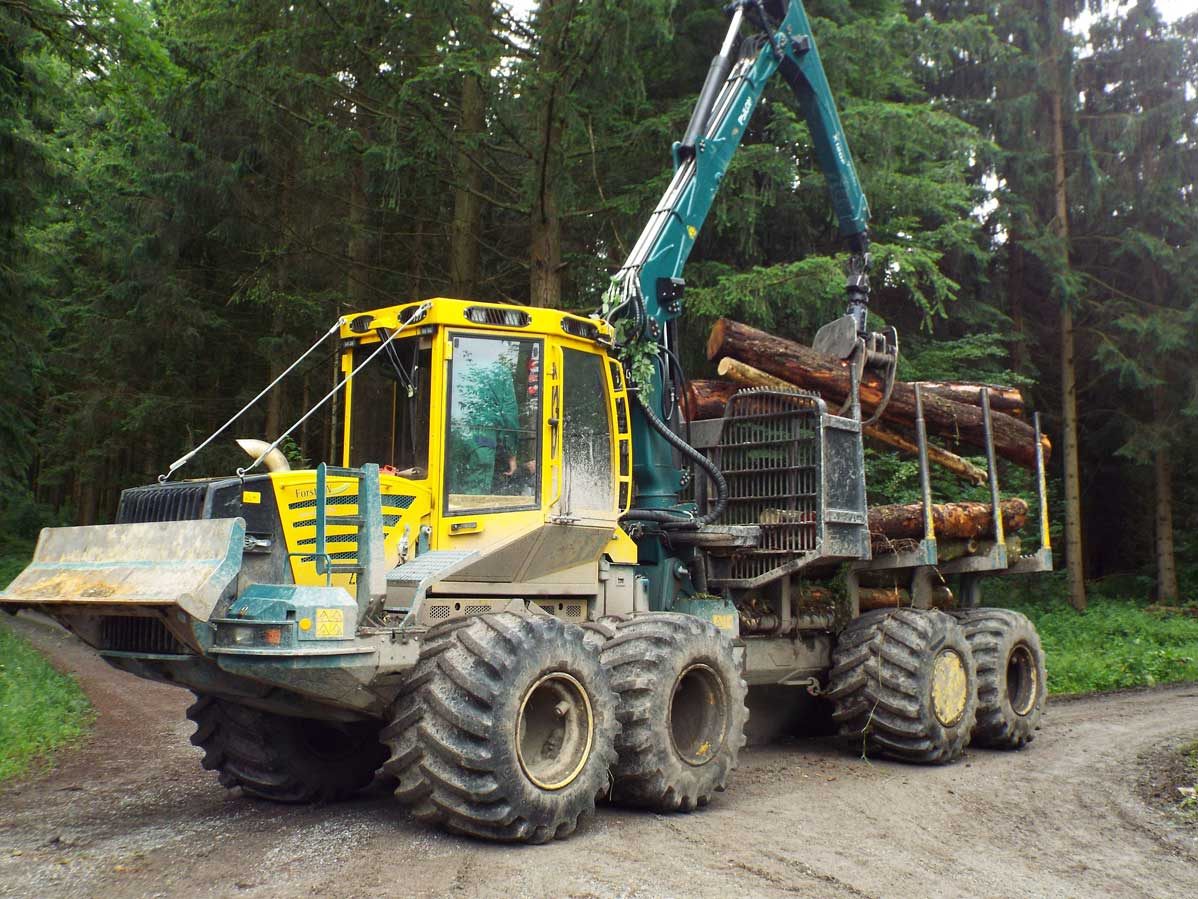 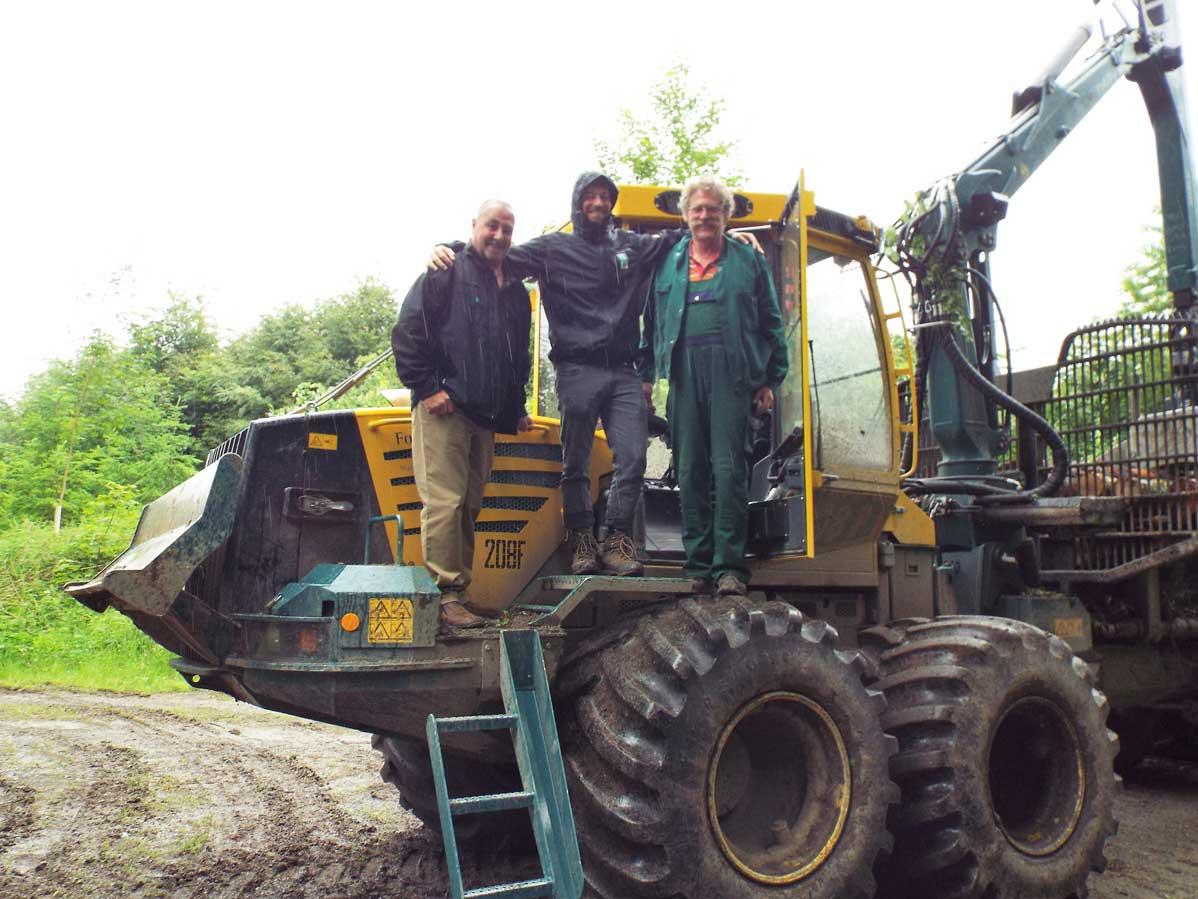 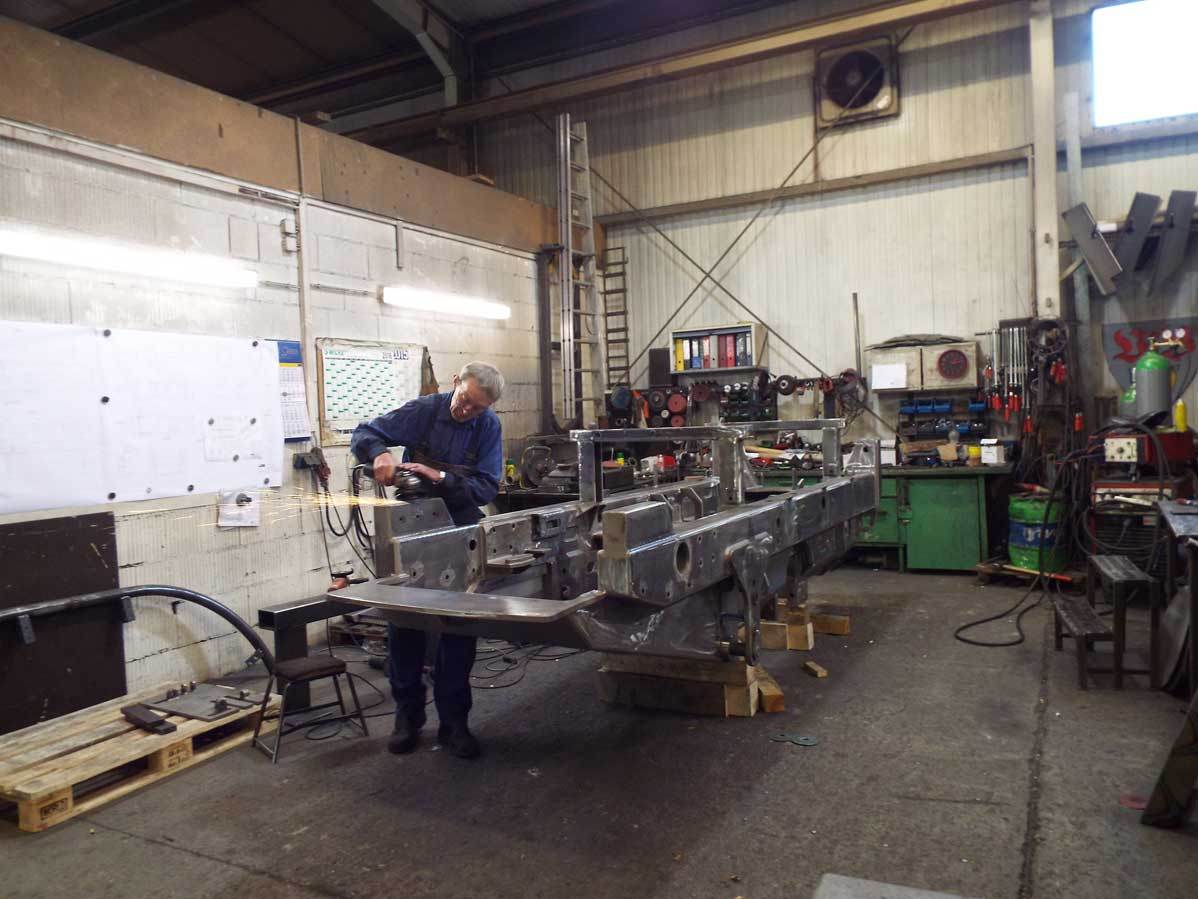 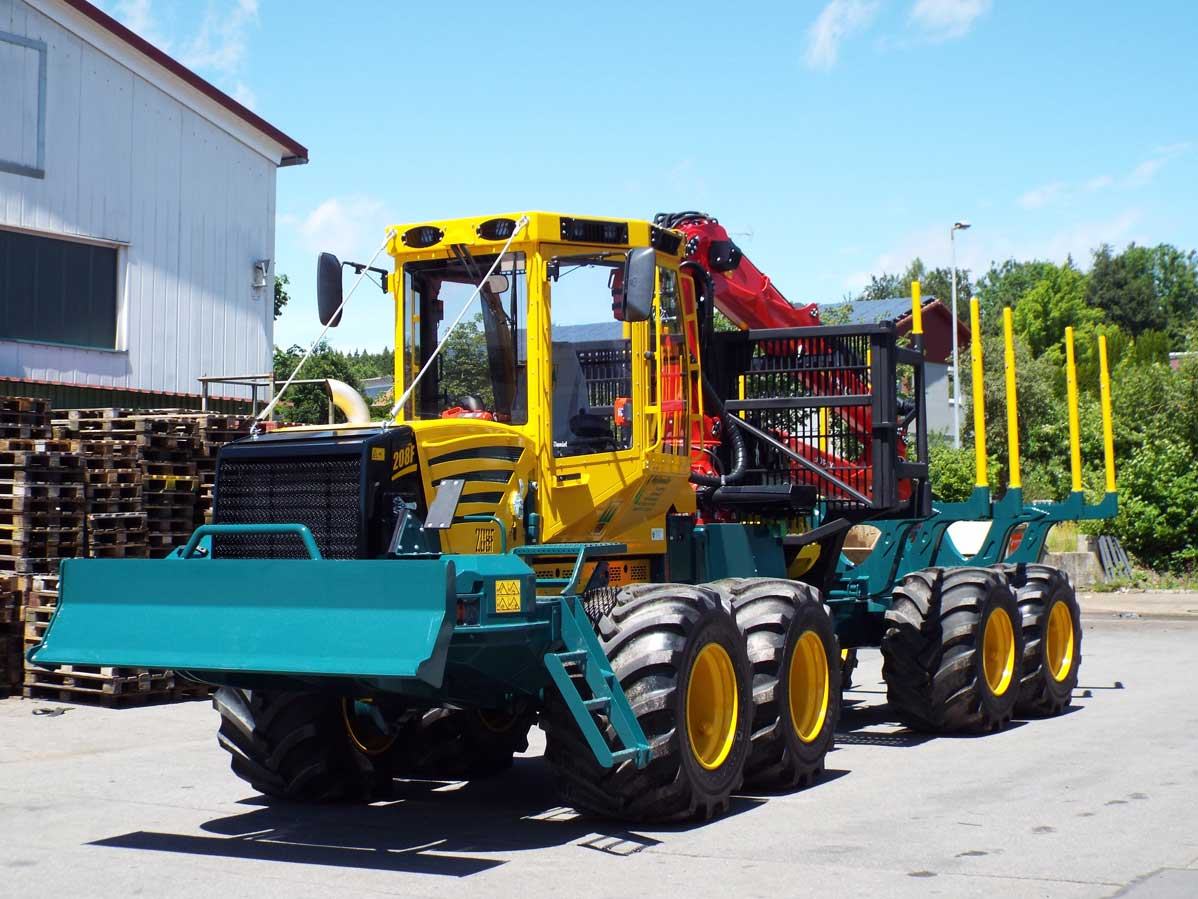 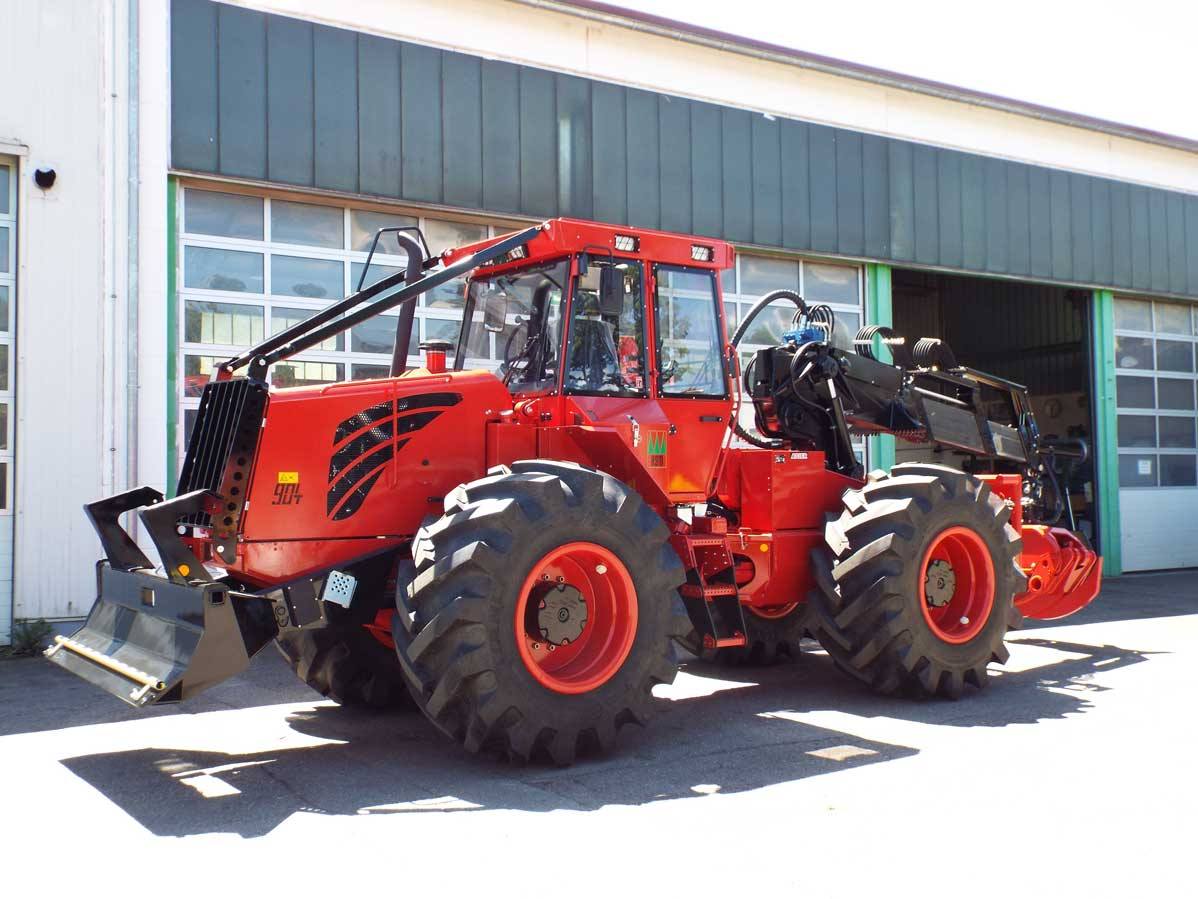 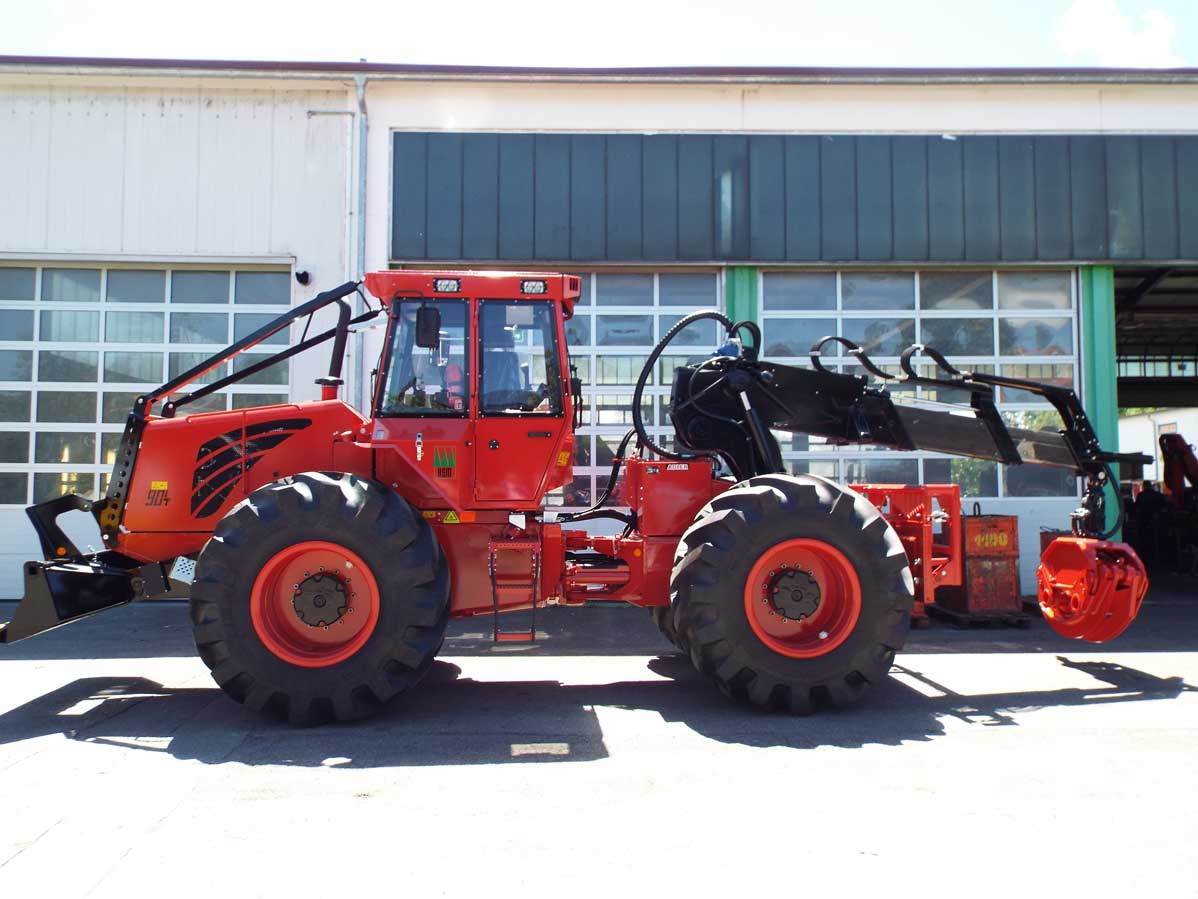 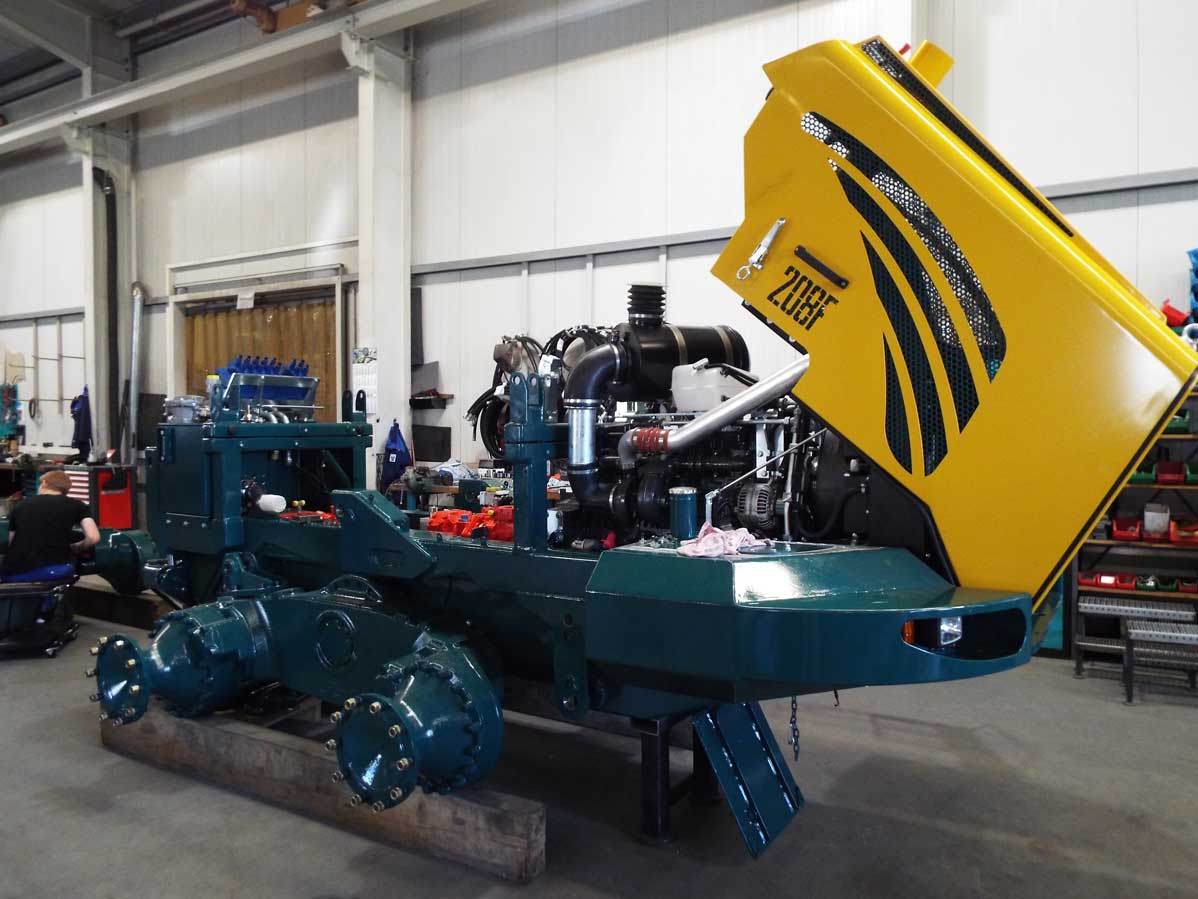 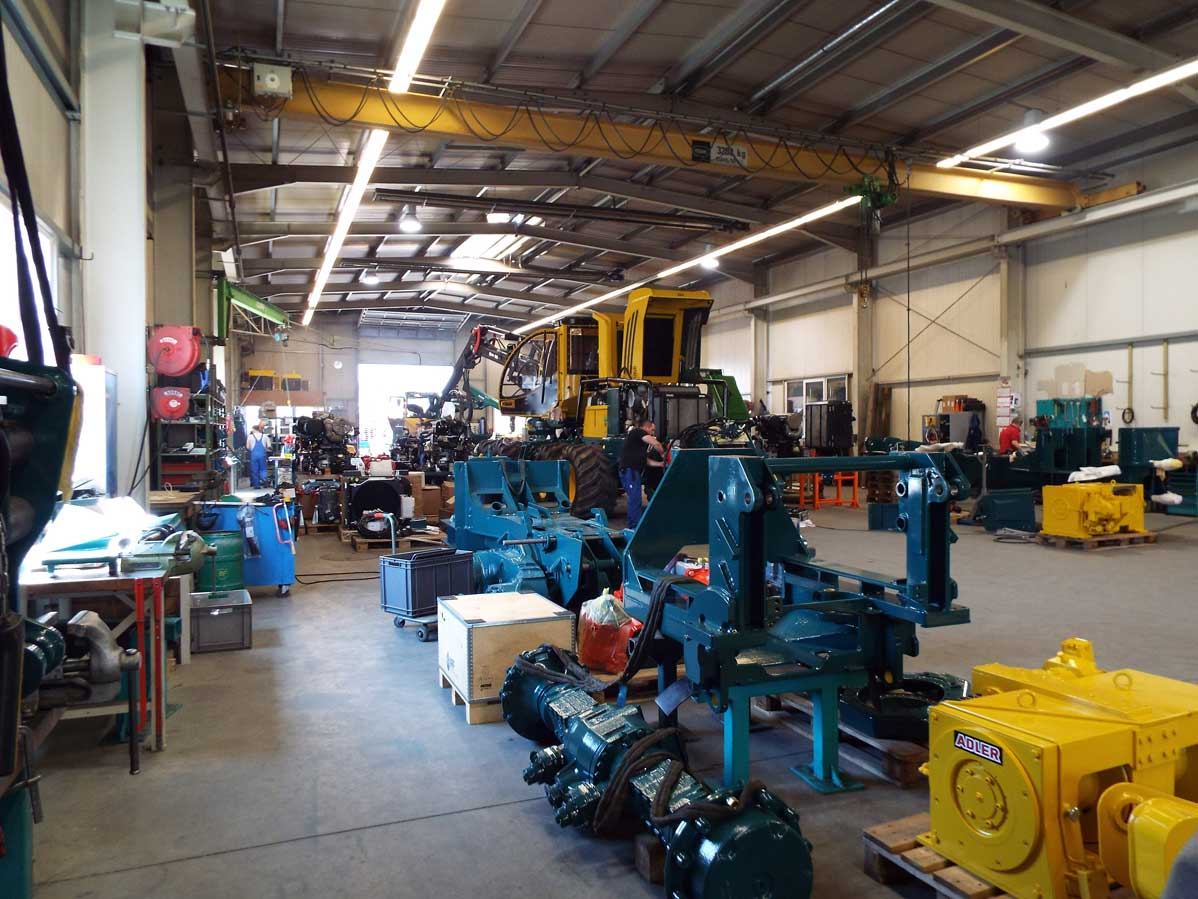 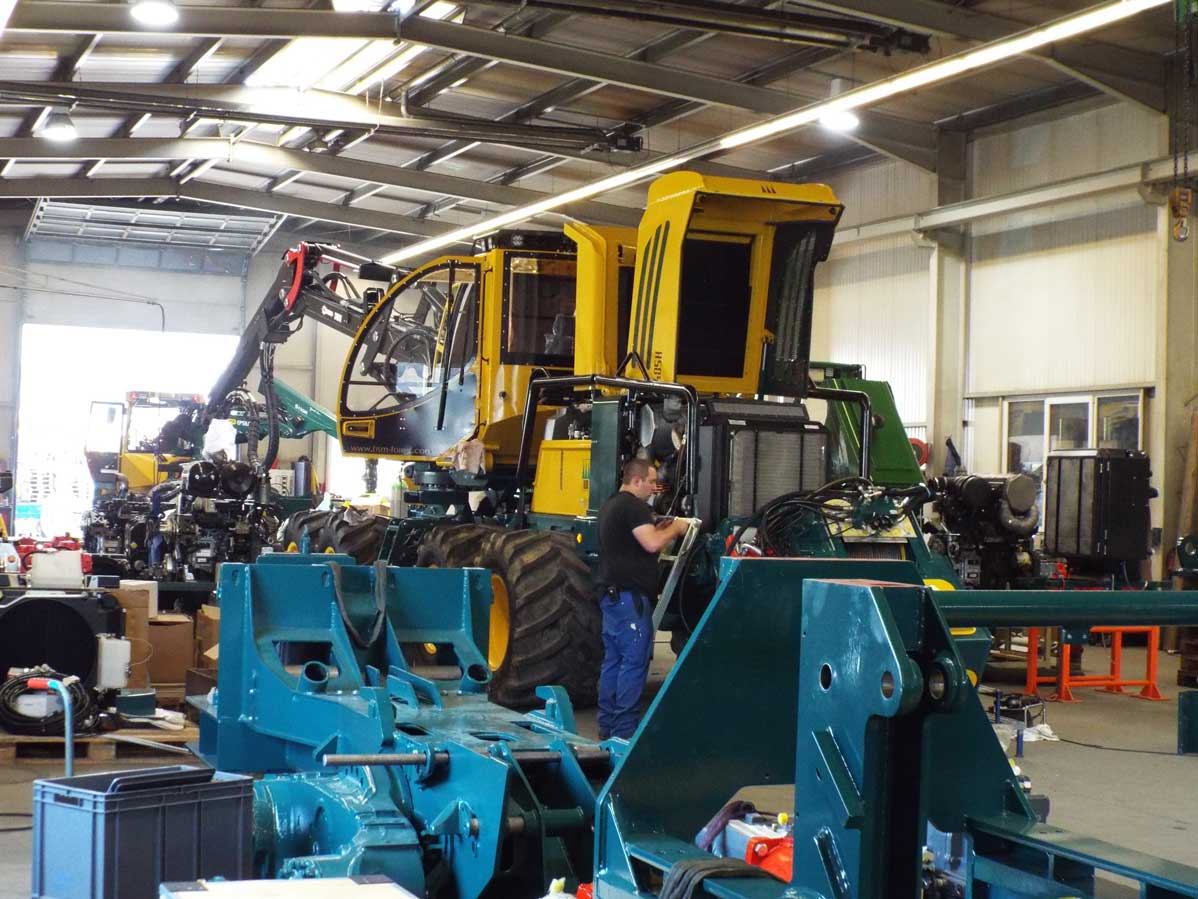 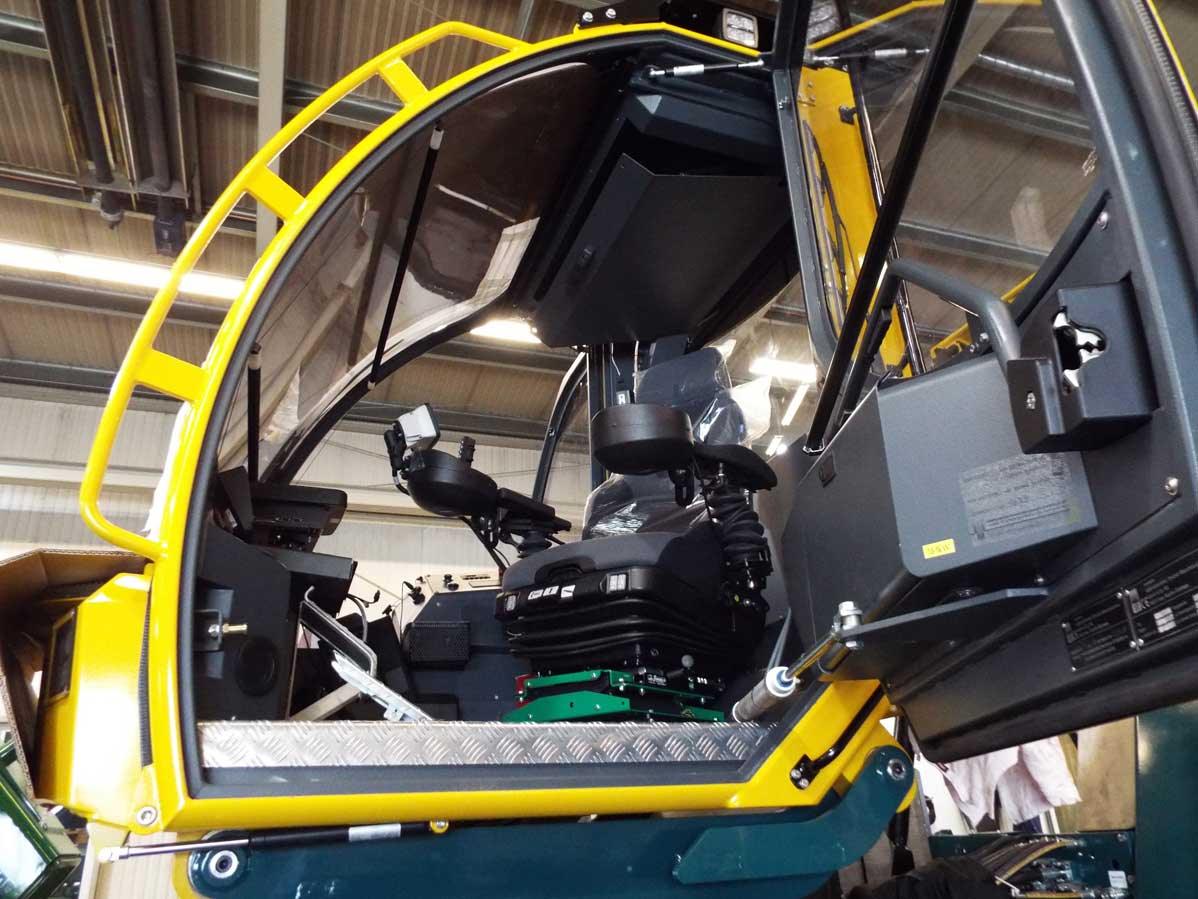 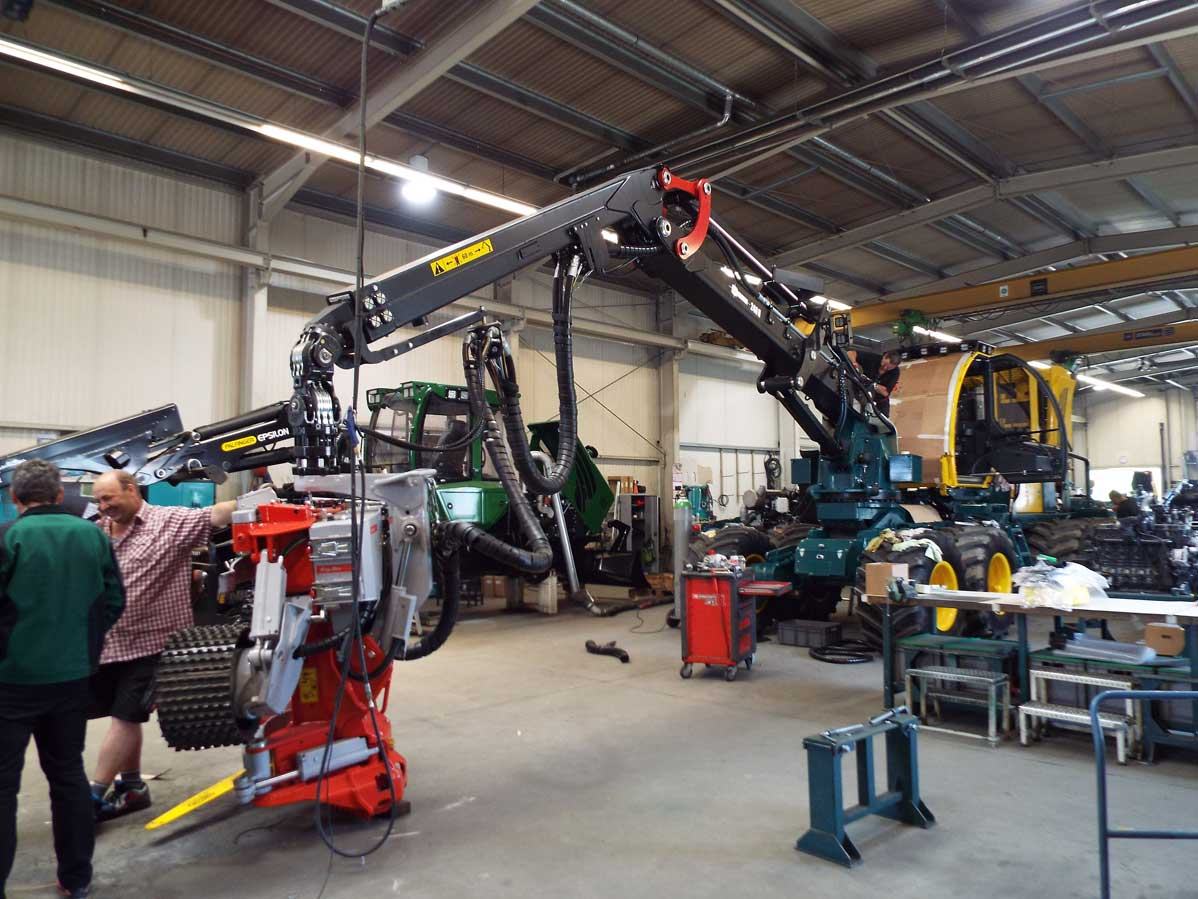 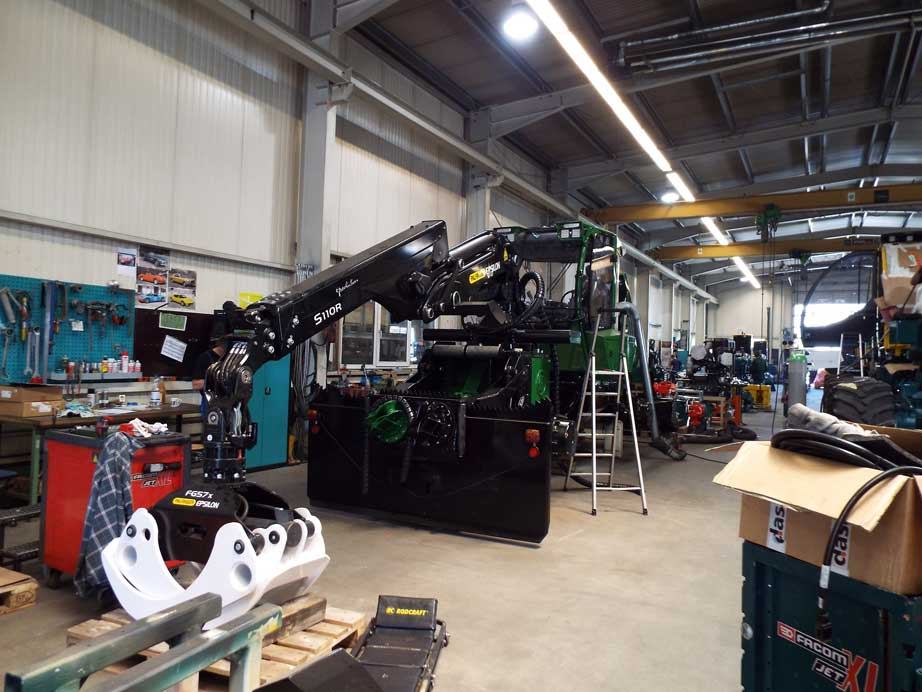 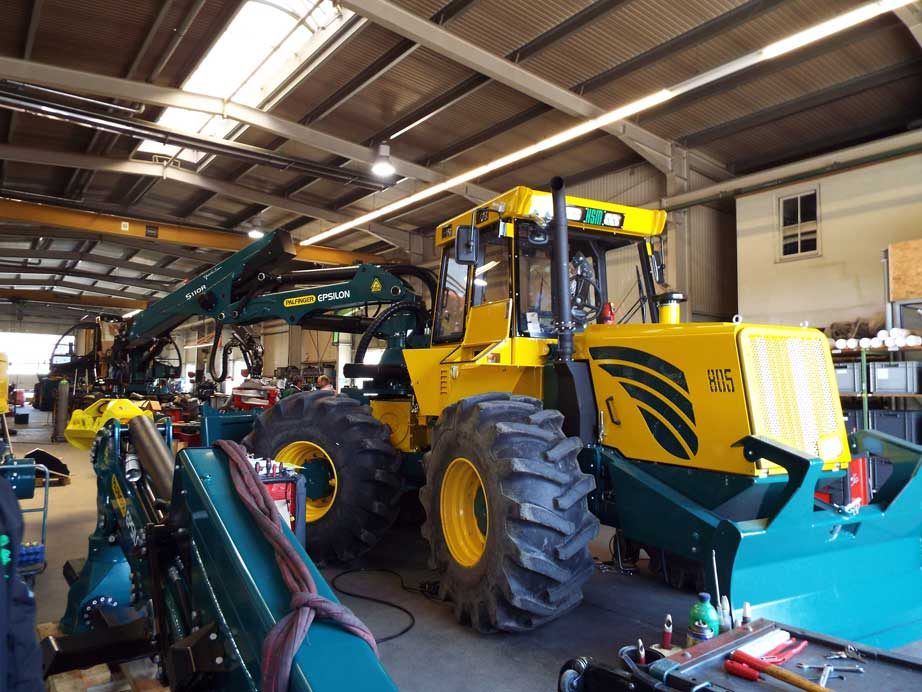 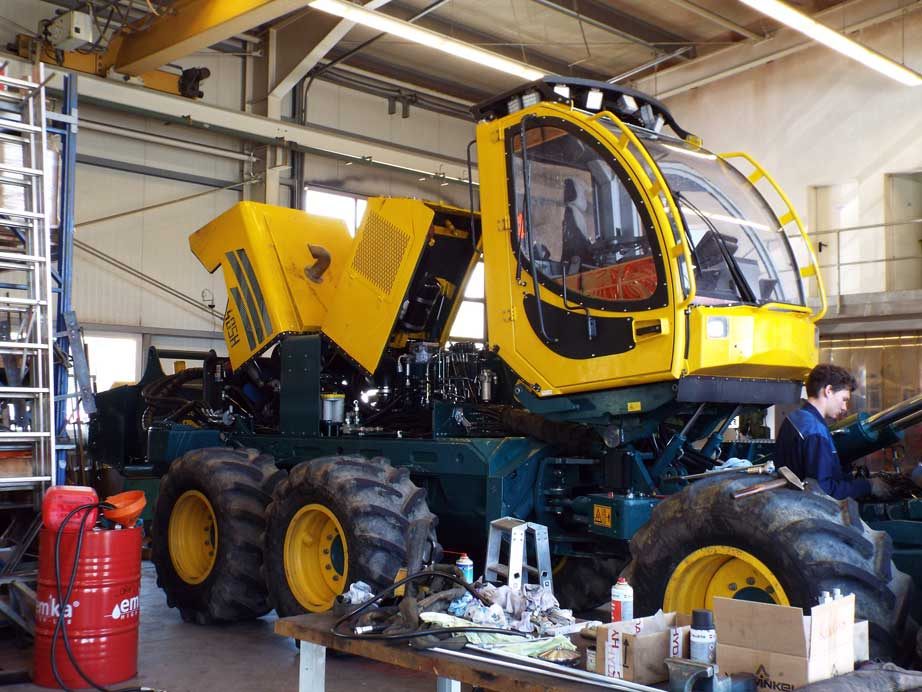