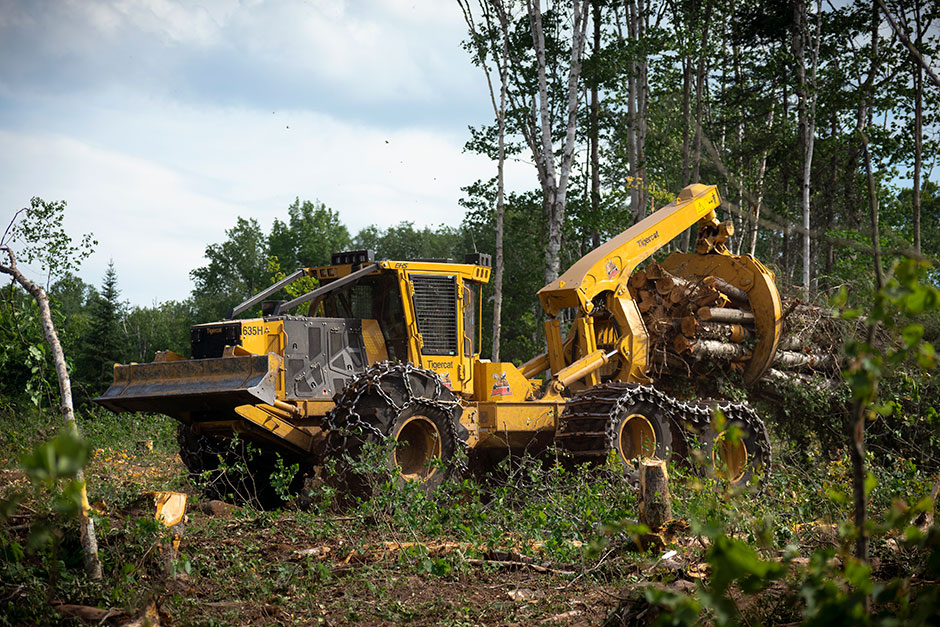 Forestiers R.B.E. Lasalle is a logging company owned by Richard Lasalle and his sons Eric and Benoit. Based out of Saint-Michel-des-Saints, Quebec, the company purchased the very first Tigercat 635H skidder in March 2020, however due to COVID-19, the machine did not go to work until the first week of June. Now that the machine has clocked over 2,500 hours (as of mid-February), it was a great time for Bre Elbourn to catch up with Eric to get his impressions

BTB: How long have you been a Tigercat customer and what machines do you own?

BTB: Can you describe your operations and the type of application that you are using the machine for?

We’re cutting from 6 to 30 inch [150-760 mm] trees. Spruce, fir, birch, yellow birch, poplar, cedar, maple – all kinds. It’s a very mixed forest. The ground conditions are varied, going from hills and rock to swampy areas. The bottom of the hill could be a big swamp and muddy. In winter, you can end up with two to three metres [6-9 ft] of snow, and always a hill around us – never on flat ground.

BTB: How does the six-wheel skidder compare to a conventional four-wheel machine in this type of application?

Eric: It’s day and night. It will double or triple the production of a four-wheel skidder, because it can handle a bigger load. It will go uphill a lot better. It will carry wood through snow a lot faster. It will not sink in mud or break through a frozen patch as easily as a four-wheel skidder. Our operators can go back in the same patch many times on the six-wheel, where they’re not able to with the four-wheel.

BTB: How do you like the extra space inside the cab?

Eric: My operators like the extra space, especially for storage. There is lots of room for a lunchbox, or winter and safety gear. It’s really appreciated – that extra space.

Eric: You’re able to see a lot more. The increased window area helps a lot during machine operation. You can see the front tires, the terrain you’re on, and more of the trees that are surrounding the machine. Because you can see so much more than in previous machines, my operators are able to judge their surroundings a lot better and as a result aren’t as rough on the equipment. So it’s a great extra value.

BTB: Do your operators like the new Turnaround® seat?

Eric: They like the new seat. They like the 220-degree rotation feature, and the ability to lock it anywhere they want with the push of a button. They had a hard time at the beginning getting used to it, but after they got used to it, they really love the feature.

BTB: What benefits do you see with this machine over other brands?

Eric: We like the uptime and reliability of a Tigercat skidder in regards to the drivetrain versus other brands.

BTB: Service access is important. How does it compare to the previous models?

Eric: Access is a lot easier. With all of the doors and extra access points provided, ease of service from the G to H models is a great improvement. Daily servicing is pretty similar to the previous models.

BTB: How do you like the ¼ turn cab tilt locking pins?

Eric: This makes the process a lot faster. Before you could spend a lot of time trying to get those pins out of there because of rust or any other reason. Now it’s fast and efficient.

Eric: It is very appreciated. It is lighter and faster to remove, and easier on the mechanic, because it’s not as heavy. They save a few minutes every time they get there.

Eric: It does. It prevents the tire pressure from getting too low without the operator noticing. It’s a really good preventative measure. If the low tire pressure was to go unnoticed, eventually we’d get either a flat tire or failing tire, which ends up with costly repair and downtime. We save money and have more uptime with this feature. We really like it.

BTB: What would you say you do differently than other loggers in the area?

Eric: Well, we are one of the few conventional mass-production mixed wood contractors left standing.

Everybody else is going to cut-to-length, either harvesting and processing at the stump or processing behind the buncher. We’re still doing it the conventional way.

BTB: What are some of the issues and challenges you’re seeing with the logging industry?

Eric: First of all is that the cost of everything went up: machine parts, mechanics, trucks, fuel, oil, parts, labour. Everything is going up, but the revenue is staying the same. More production is required, and less downtime is always a challenge to try to stay profitable in the industry. Another issue is labour. Having good, well-trained, and honest operators is a challenge. It’s getting harder and harder to find good operators these days.

BTB: What is it like working with Wajax as a dealer?

Eric: Well, we love working with Wajax, and it’s part of our decision in choosing Tigercat. Wajax can very often troubleshoot a machine over the phone with the customer. And if they’re not able to fix it, they can turn around very fast and send a mechanic in a timely manner to fix the equipment.