Logging in The Swiss Alps by Matthias Wüthrich 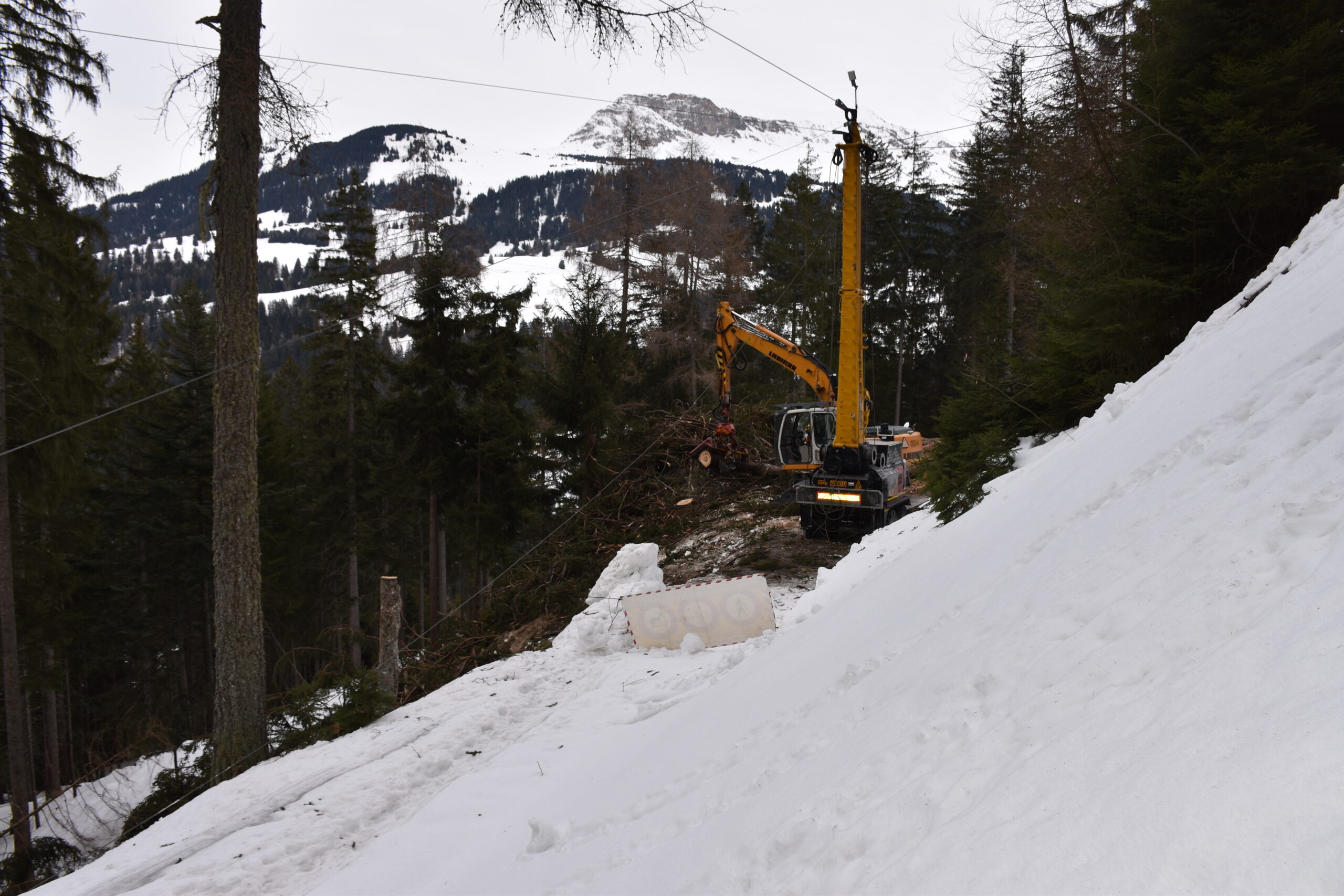 Matthias Wüthrich is from Switzerland and is part of the technical stuff of a scientific experiment concerning forest and climate change. He began his career in forestry 15 years ago as an apprentice forestry worker before becoming an operator of forwarders and skidders – HSM, Dasser and Timberjack. He followed this with a Bachelor’s degree in forestry and spent half the year as an exchange student at UHI in Inverness. When he is not working in the forest, he really enjoys the outdoors especially hiking, swimming in a lake or river and snowboarding.

In Matthias’s first article for FMM he writes about cable extraction in the Swiss Alps with Hemmi Forest and their Konrad Liftliner LL40-1 carriage, Konrad KMS 40-2 skyline and a Liebherr wheeled excavator which is equipped with a Konrad Woody 60 harvesting head.

Hemmi Forst is a logging company founded 40 years ago. It is located in Lenzerheide, a village well known for skiing and its beautiful mountains.

Hemmi Forst offers a wide array of services, from planting and thinning through to harvesting, they cover the whole lifespan of the forest. The company specialises in high altitude Alpine logging while caring for the environment by using cable cranes, winches, excavators with harvesting heads, tractor/trailer combinations and one grapple skidder. They offer a timber marketing service and are firewood merchants. In addition the company builds avalanche barriers and other structures to protect against natural hazards. Hemmi Forst employs 12 people including one apprentice.
www.hemmi-forst.ch

It was obvious that I was heading up to a snowy worksite after speaking to Ivo Pfiffner, the cable crane operator, to ask for directions to where they were working. He asked if I would be driving a 4×4, and when I replied no there was a deep sigh at the other end of the phone line: “You can give it a go” said Ivo “but I think you will be walking.” I would like to give a special thank you to the inventor of snow chains as, luckily on the day, my car made it to the top of the hill where they were working.

The logging site was located on the slope above the village of Churwalden in the canton of Grisons in the Swiss Alps. It is accessible by a gravel forestry road with an inclination of approximately 10%. The road is roughly cleared of snow but still remains icy and slippery.

After 1.4km I arrived at the hairpin bend where the skyline landing area is located, this is at an altitude of nearly 1400m above sea level. The skyline cable extends for about 600m uphill into a stand that is predominately Norway Spruce with a DBH of up to 90cm. Small areas of this forest are to be felled to allow natural regeneration to occur as this forest is not solely for timber production but acts as a natural shield to protect the main road in the valley below.

The trees had been felled by Hemmi Forst`s logging crew before the cable line was installed. Any trees exceeding the capacity of the carriage were cut in half and there was around 400m³ of timber harvested for this cable line.

As the closest road is at the log landing area the loggers have to access their work area by small footpaths carrying all their equipment with them. Felling is always a risky and physically demanding task and steep slopes and lot of snow increases the challenge.

As the wood on the first cable line starts to get yarded, the loggers are felling the next adjacent area. Multiple cable lines are used in the same area which reduces transportation. The effort needed for installing a second cableway is much less which helps to reduce costs. The installation of the cable line using one support and an anchor took them about two days. “Normally we do it in one” says Pfiffner, “but we had one metre of fresh snow!” With a smile on his face he tells the story of the two skiers passing by. “I was working on the support as they came down into the forest, asking me for directions to the next village.” He laughs and adds: “Lucky for them that we were here as they were completely lost.”

With everything set up it’s show time for the Konrad Liftliner LL40-1carriage. “It is brand new; it’s just the 4th cable line we have done with it.”

The Liftliner is equipped with a 55kW VW diesel engine driving a winch with a pulling force of up to 4.5 tons. The strong pulling force was essential on this site. “We had felled all the trees and were surprised by an unexpected heavy snowfall” said Pfiffner, “and now the trees are all stuck in a layer of frozen snow which is really annoying!” Sometimes the winch has to work really hard to free the logs from their icy grip. With the power of the winch the main skyline cable is pulled down and to the side and when the logs are released it snaps back very fast.

This is a stark reminder that working with cables under tension can be dangerous and requires well trained skilled operators with a special awareness for safety.

The carriage and skyline crane are both radio controlled and with the separate winch integrated in the carriage it is possible to lift or lower the load while travelling. This is appreciated by Pfiffner as It allows him to quickly and easily circumnavigate around obstacles and avoid any damage to the remaining timber stand and natural regeneration. The skyline crane features an automatic drive function for the carriage. This means that it automatically reduces its speed when passing a support. In addition, stopping points can be programmed so the carriage comes to a halt and control will be passed to the chokerman or to the operator of the excavator.

The Konrad skyline crane is situated on the hairpin bend with a small area for stacking the timber. It is a Konrad KMS 40-2 skyline mounted onto a tandem trailer. Hemmi Forst`s Konrad KMS is equipped with 3 cables. The third cable allows for downhill yarding and is very effective when working on flat terrain.

As it is positioned at the lower end of the cable line the trees have to be yarded downhill but have to overcome a small little counter slope in the middle of the coup. The cable line has a length of about 600m but realistically this could be increased to 800m. “We normally use the skyline over 500-700m. If longer distances are needed we use a Wyssen cable winch”, says Pfiffner.

Once the trees arrive at the landing the operator doesn’t have to leave his seat as they use radio controlled chokers. These are more efficient, and a much safer option as the operator isn’t scrambling about on the slippery trees.

For processing the trees the company has a Liebherr wheeled excavator which is equipped with a Konrad Woody 60 harvesting head. This is a clever head which is capable of folding up the saw unit and the feeding rollers. It can then be used as a grapple for stacking timber. This is a perfect solution for working with the skyline.

The timber quality is mixed. Spruce at this altitude tends to be quite knotty but the short summers under alpine conditions cause slow and steady growth of the trees which can lead to high quality trunk wood. “The best quality logs are going to Florinett AG, a local sawmill”, explains Ivo Pfiffner. With a little pride in his voice he adds, that some of them might even make Tonewood, this is the best quality special lumber for making instruments. Only knot free, slow grown timber from high altitude forests is used.

Logs of lesser quality are going to Schilliger AG, one of Switzerland’s biggest sawmills which is situated about 150km away. Lesser quality wood but still suitable for milling is being exported to northern Italy. As the canton of Grisons is bordering Italy and Austria, sawmills there are often closer than their Swiss counterparts and therefore exports are important for the local timber market. Wood unsuitable for milling, is chipped and will be used in biomass boilers operated by local villages to heat schools and town halls.

With limited available stacking space by the skyline, timber has to be removed constantly. There is insufficient room for lorries to turn around and arranging a constant removal of timber would be very difficult. To combat this they use a John Deere tractor with crane and trailer. It picks up the logs and stacks them near the main road where there is turning room and good access. To work safely while travelling in the snowy and icy conditions the tractor and trailer has been fitted with snow chains.

Harvesting wood under alpine conditions is demanding. It requires well trained and motivated professionals using suitable machinery designed for such circumstances. To see a good system like this in operation is impressive, everyone is working together with precision just like a like a Swiss clock although not as quiet!

The compact tilting mast system (KMS) KM40-2 is a radio-controlled rope crane system mounted on a tandem trailer. It combines a high degree of occupational safety with excellent productivity and is extremely flexible when it comes to changing the place of use. All machine functions are carried out by radio remote control, which significantly shortens the set-up times during cable car assembly. Once the rope crane system has been installed and in operation, the KMS impresses with its performance thanks to its high trolley speeds and comfort functions such as automatic track automation and automatic radio transmission.

An optional hydraulic auxiliary drive assists the towing vehicle in reaching the site. Due to the complete self-supply of the auxiliary drive by the hydraulic system of the KMS, the towing vehicle has its entire power at its disposal. The KMS, type KM40-2 is available as a 2-rope, as well as a 3-rope version. Options such as mounting winch, long rope design or additional clamping rope winches show how versatile this compact machine is.

With the radio-remote-controlled trolley Liftliner it is possible to work with the functions “lifting/lowering” and “driving” at the same time.
This allows particularly gentle and efficient work in crawls as well as precise placement of the logs at the unloading point. Due to the separate lifting rope winch, the cable and circulating rope are attached to the trolley and thus have only the task of pulling the trolley.

The carrying rope clamp is only switched when the rope breakage fuse is triggered or by manual actuation. As a result, the Liftliner LL40-1 trolley works virtually without train and rope wear.