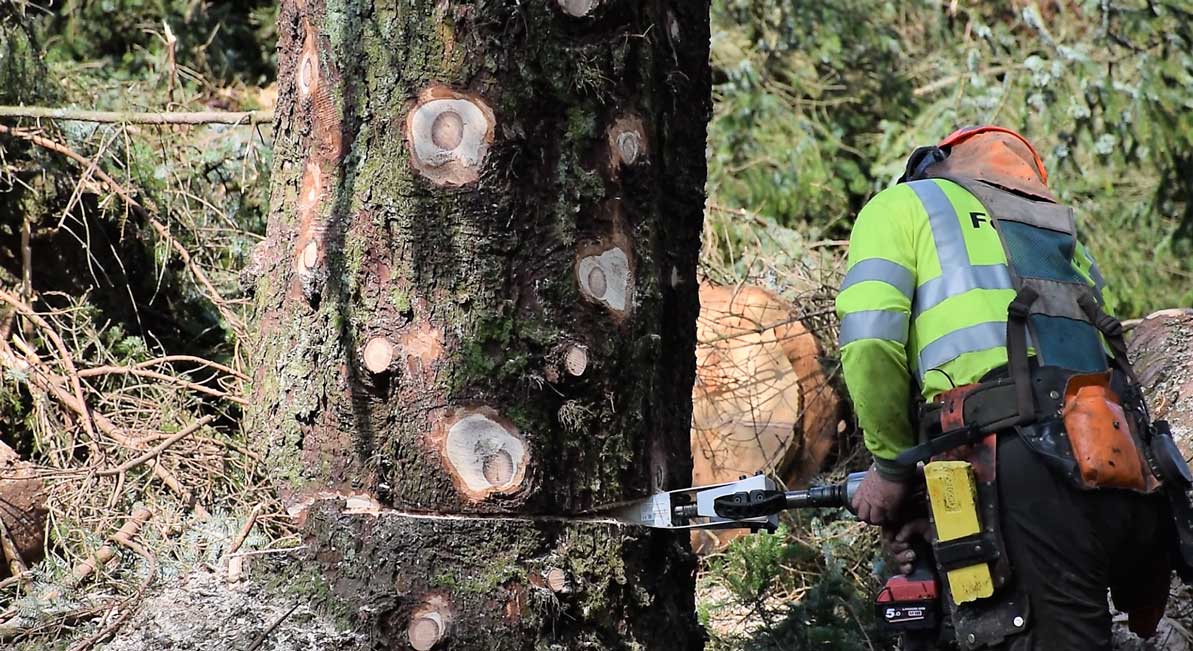 The German made TR30AQ felling wedge is a felling wedge driven by a threaded spindle. It is made of aluminium and tough polyamide and was built by a professional logger working in large timber in the Black Forest. It is specifically designed for use with cordless impact drivers although a standard ratchet can still be used.

Stefan Reich from Forstreich Maschinenbau, recently sent Forest Machine Magazine a TR30AQ with a ¾ drive Milwaukee Impact Driver, to find out what the UK chainsaw operators thought of it and to see how it would perform. Like most equipment it takes a little bit of time to get used to and develop a technique where it works at maximum efficiency.

Personally I thought that used correctly in the right circumstances this could be a very welcome and labour saving addition to a lot of chainsaw operators and tree surgeons. Like all equipment though it has its limitations, it is not designed to replace a 20 tonne tree jack by felling heavily branched 3 tonne + outside Sitka Spruce trees back into the coupe. It is designed to fell trees that would normally need a hammer and a wedge to get them over. As someone who has spent over 15 years using a chainsaw professionally I can see the advantages of this wedge. To me it is no heavier than carrying a hammer and wedges, easier in fact, as you can purchase belt holsters for both the wedge and impact driver. This is a safer option as you are not trying to carry too much in your arms from tree to tree and as anyone knows you will overload yourself rather than make two trips.

I have spent a lot of time felling trees that were too big or too rough for the harvester, on a price per tree basis, and it would not have been long paying for itself with the extra trees I would have felled each day. Pounding wedges into the back of a tree with a sledge hammer can be arduous and exhausting work, I think I would much rather the impact driver and mechanical wedge do the work for me. I was impressed by the robust build quality and thought it was reasonably priced compared to some other types of felling aids I have seen recently.

This is the first trial we have conducted with the wedge but more are scheduled for the next issue: it will be good to see how it performs in large hardwood trees.

WALLIS WEIR REPORTS: When I got a message from Rab asking if I’d any big timber to fell to trial the TR30 AQ felling wedge from Forstreich Maschinenbau it didn’t take much thinking about: I knew I’d some bigger trees coming up and I always like playing with shiny new things. I’ve tried most means of getting trees on the ground, approved and “less approved” – wedges, felling bars, jacks, winches, skidders, tractors, pick-ups, harvesters, pushing them over, cutting them when the wind is in the right direction, diggers, the RAM hydraulic wedge and even cursing and swearing at them (this last method rarely works) – so it seemed fair to add the TR30 to the list.

In the few days before Rab came out with the wedge I managed to get a shot of Kohler’s ratchet wedges which I wasn’t massively impressed with. The construction of these seems a little flimsy and using the ratchet back and forward quickly became tiresome, unless you cut a high stump in which case you can turn it right round and they seem expensive for something which wouldn’t get much use. When I’ve used the RAM hydraulic wedge in the past I’ve never been very impressed by it; it’s big, awkward, heavy and, in my experience, has a tendency to spit itself back out of the tree rather than tip it over. The price tag for the RAM always seems eye-watering.
I normally use a breaking bar for smaller trees, I’ve a hammer and wedges for bigger trees and a bottle jack with an adapter plate for really big or awkward outsiders. All these are cheap and easy to move around and easily replaced. The jack admittedly can be awkward and heavy, but it’s redeeming features are it is cheap and effective.

A little bit of research on the TR30AQ revealed another eye-watering price tag and the pictures and videos didn’t look enough to win me over. It looked like another gimmick, something else to carry around, more weight and more expense. All very well if you work for a large organisation and have a budget to waste on overly elaborate solutions to problems that don’t exist, but in the real world simple, cheap and easy is normally what I want. It’s fair to say that the TR30 AQ had a lot of work to do to win me over.

We started off the trial felling outsiders – Sitka spruce between two and three feet diameter and a bit over 100 feet tall – mostly also with a slight back lean towards a burn and the main haul road through the wood, they were also near the bottom of a steep slope needing felled uphill. These weren’t easy trees and the first one was a real struggle. A little bit of refinement of technique and the trees started to go over easier.

The trick with getting the wedge to work properly seems to be to cut most of the way through the back cut, leaving a supporting strap at the back. The wedge needs a small mouth cut into the back cut to insert it, I found that inserting the wedge as far as the studding on the expander plates gave the best results. Once this is done the back cut can be finished, the wedge screwed in with the impact gun and the strap severed. At this point the wedge can be screwed in the rest of the way and the tree should fall. It takes a little getting used to as it is the plastic insert which travels into the tree while the expander plates remain stationary.

Trees needing a lot of lift to get them over might need wedges in addition to the TR30 AQ, either to help the mechanical wedge or to hold the tree while it is inserted further. The mechanical wedge is not a fix all tool, I don’t see it taking over from traditional hammer and wedges, nor do I see it taking the place of a jack in particularly heavy trees being felled against the lean or bias. Overall though, I was very pleasantly surprised by the TR30 AQ. I also tried it in a stand of western hemlock of similar size to the spruce, but on flat ground and uniformly grown. In this environment, coupled with my improved technique, the wedge came into its own, the trees all required a little persuasion to go in the correct direction and the wedge made light work of it. After returning the TR30 AQ to Rab I was back at this job and wedging with a hammer was a lot more work.

I liked the TR30 AQ, it is a lot easier than pounding wedges. The battery life seems very good on the Milwaukee impact gun, in all the times that I used it there seemed very little drain on either the 5v or 9v batteries. It could also be used with a manual ratchet which could be useful if dealing with dead trees where you don’t want to send a shock through the stem. There is a convenient carrying handle on the wedge and the impact gun itself is easily carried, there are holsters available which would have made transportation even easier. The wedge comes with a cover for the screw thread to protect it in transportation and there is a lynch pin to keep the driver and wedge together during use, but easily separated for storage or transportation.

There are a few down sides to the wedge; it is an aid which is still going to need wedges to be carried (but maybe not as many). It’s not going to deal with the real horror show trees which will still need a jack or a winch. The noise from the impact gun up close is enough to make me want to put the ear defenders down which means that I missed being able to hear what the tree was doing as I normally would be able to if wedging or jacking. I didn’t test it in the rain (unusual for working around Aberfoyle and Loch Lomond), I’m not sure how I’d feel about having an impact gun out for a prolonged period of time in real wet Scottish weather. Finally the price! At the moment it is a very expensive bit of kit, more expensive than the saw which fells, sneds and cross-cuts the tree. I’d like to have one in the tool kit but at the moment I’m struggling to justify it, although roughly half the cost is in the impact gun so really I’d be getting two tools. If you already have an impact gun then the cost would be a lot less.
Wallis Weir