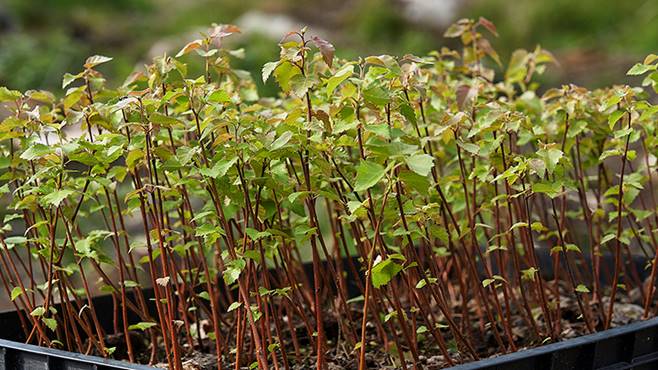 The decision to increase broadleaved trees is an important and timely move. “It makes sense from every angle. It will improve our yield capacity and also safeguard biodiversity. It will additionally ensure that our forests stay healthy and better equipped to resist the altered conditions caused by climate change. In the multi-purpose forestry sector, we strongly rely on native tree species,” says Sauli Brander, SVP, UPM Forest.

New work instructions will be issued for clearing and thinning to increase the proportion of broadleaved trees in suitable growth areas. The new instructions will take effect this year. The new policy will also directly affect UPM’s nursery in Joroinen, Finland. “We are committed to increasing our capacity for birch seedlings,” says Anne Immonen, Manager, UPM Nursery.

UPM’s forest assets in Finland cover over half a million hectares. Although UPM sources the majority of its wood from private forest owners, company-owned forests play an important role in its wood sourcing, development of forestry operations, and training of personnel. The best practices developed in the company’s forests are also shared with private forest owners.

UPM is the first forest company in the world to officially adopt the target of enhancing biodiversity in company-owned forests in Finland by 2030. The new decision to increase the amount of broadleaved trees forms part of an extensive toolkit of instruments for safeguarding biodiversity.

UPM sees the new policy as an effective way of simultaneously promoting all of the company’s 2030 responsibility targets. It will also strengthen the international competitiveness of Finnish forests measured by all key indicators.

Wood is the most important raw material for UPM’s production. In UPM’s operations the most significant effects on biodiversity occur in wood sourcing. Wood production takes place on large land areas, and forestry operations have different effects on the state of a forest and the species inhabiting it.

UPM is committed to carrying out and developing sustainable forestry operations. The key objectives of sustainable forestry are efficient production of high-quality wood, maintaining and enhancing biodiversity and protection of water and the recreational and various other uses of forests.

UPM safeguards biodiversity in its own forests through the implementation of its biodiversity program. The biodiversity program was established in 1998 and covers environmental guidelines concerning operational activities, forest conservation and collaboration projects with stakeholders. UPM actively develops forest certification, which is an important tool in engaging operators throughout the forest industry in the principles of sustainable forestry.

UPM owns around half a million hectares of land in Finland. Part of the wood used by UPM’s mills is sourced from the company’s own forests. In addition to supplying wood to its mills, UPM’s forests have a significant role in research and development. The best practices developed in the company-owned forests are offered to forest customers as forestry services.

Aiming for a positive impact on biodiversity

UPM is aiming to improve the state of biodiversity (Net Positive Impact) while efficiently producing high-quality wood raw materials in the company-owned forests. The indicators used and the measures to be implemented are based on the comparison of natural and commercial forests and the gap analysis identifying the key differences between these two forest types.

The global population growth and the increasing pressure to use land have resulted in the loss of biodiversity on a global level, which, along with climate change, is the most significant environmental challenge of our time. A viable nature should be the target when the bioeconomy helps us move on from the non-renewable fossil-based options to the use of renewable raw materials.