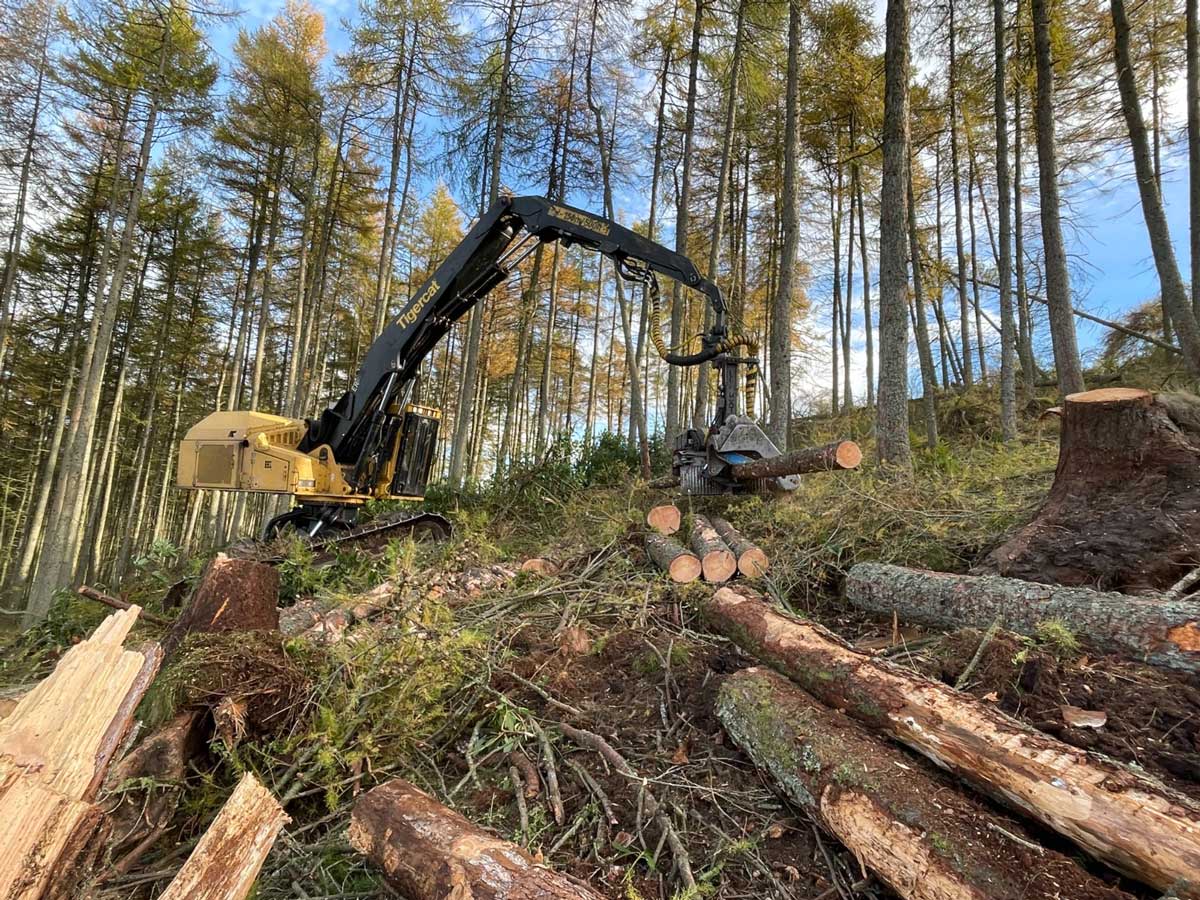 Iggesund Forest are a market leader in cutting technology with over 30 years’ experience in manufacturing guide bars, chains and accessories for harvesters and grapple saws.

Having trialled several of Iggesund’s products over the last few years, I had no hesitation when Ian Lawrence, the Iggesund export sales manager, suggested carrying out field trials with a brand-new product that the company were launching, the Blu Line Vyking ¾” Gide Bar.

The Guide Bar is much lighter in weight due to using an advanced metal alloy with a specific tempering technique which Iggesund are keeping secret – that will work effectively in every species of tree. The Vyking bar features the revolutionary 60 degree cut endurance rails. This minimizes chain wear on the bar with less service stops for grinding off roughed up edges and will offer a longer life span. The bar is equipped with a replaceable nose tip and sprocket, this reduces friction and heat, and is fitted with hardened shims to protect the bearings for optimal performance.

Harold Taylor, a Timber Harvesting Contractor from Insch in Aberdeenshire, was happy to take part in the trials as he was using ¾” bars and chains on a Tigercat LH855C with a LogMax 10,000 head. Bobby Melvin, an experienced operator, was at the controls of the Tigercat and was working on a Larch Clear fell near Forfar.

Ian Lawrence and I met Harold at his office just off the A90, and he took us out onto site. Bobby was nearing the top of a steep drift a few hundred meters uphill from the road, my idea of coming back a few hours later when he was at the bottom fell on deaf ears. ☺ We were able to make our way up by zigzagging through the standing trees – walking up through a well thinned block is much easier than doing spectacular acrobatics while walking up the brash mat. The trees were averaging 0.7m³ and it was an unusually dense and slow growing Larch crop with very tight growth rings.

There was about 7,000m³ to cut in total and Bobby had cut just over 2,000m³ when we arrived. A few loads had been loaded onto Lorries and taken to the sawmill over the previous days and Harold was surprised at just how heavy the timber was.

With Larch it can be a struggle getting the weight on the Lorry – due to it being one of the lighter species – but this timber was the complete opposite with the Lorry only ¾ loaded before reaching the legal weight limit.

Watching a good operator like Bobby working is always a pleasure and although he was productive his presentation of different sized timber for the forwarder was very tidy.

Bobby was very positive about the performance of the Vyking ¾” Gide Bar. He noticed the reduction in weight when he installed the first bar and was a little apprehensive over the strength to begin with. After a few days cutting he was soon reassured that although the Iggesund bar was substantially lighter, it was performing very well.

The ground was reasonably firm earthy soil with very few stones, this allowed Bobby to get his felling cut low to the ground. This is important because when the harvester fells the tree it must make a level cut across the stump. It can result in the bottom side of the remaining stump being substantially higher than the topside due to steepness of the ground. This can cause severe extraction problems for the forwarder operator if the harvester operator doesn’t cut them low enough.

Having harvested just over 2,000m³ with the bar, there was still little evidence of wear. Each time Bobby fitted a sharp chain he turned the bar so it would wear evenly. The LogMax 10,000 doesn’t have an automatic chain tensioner, this must be done manually.

This visit was just to get some initial feedback from Bobby as to wear and performance, but I will be visiting him again in December once he has put a lot more cubic meters through the head. It will be interesting to get Bobby’s thoughts and the results of the longevity and performance of the Vyking Guide Bars. This was Iain’s first trials with the new ¾” bar and it was pleasing to receive positive feedback.

Parking Up The PONSSE