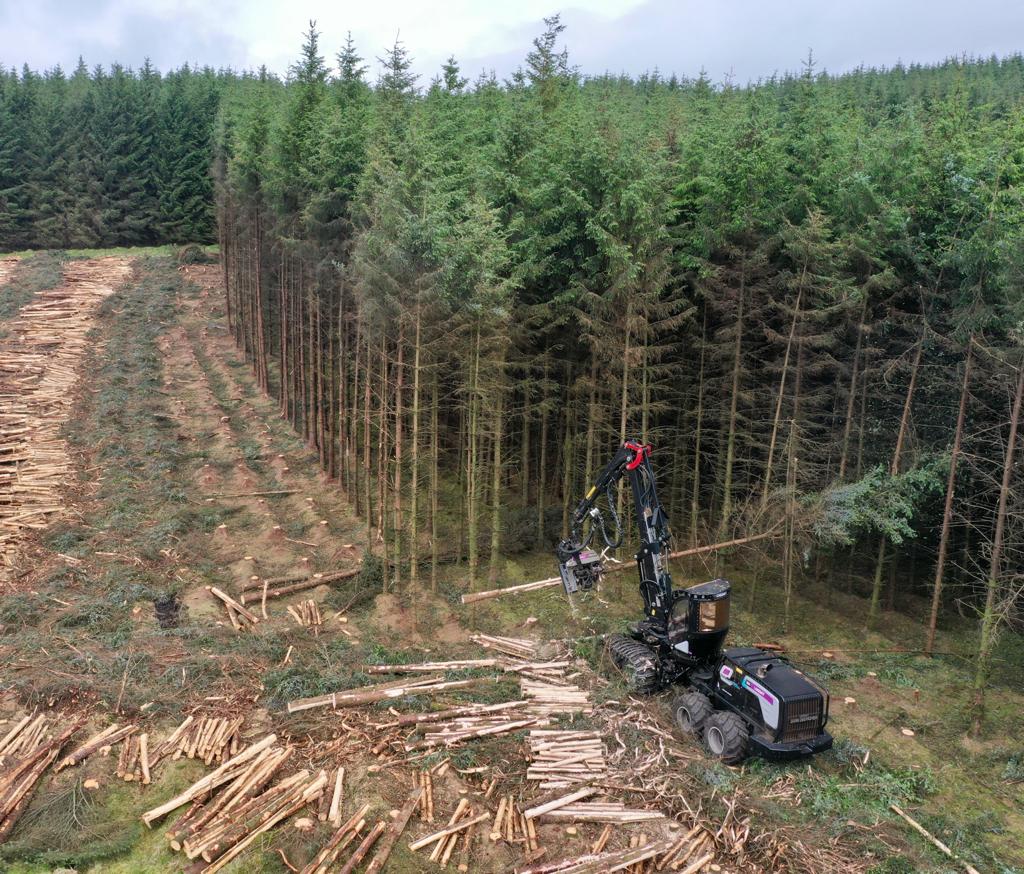 The first Logset Hybrid 8H GTE timber harvester has been sold by RJ Fukes Forestry Services of Llandovery in Mid Wales to Michael Doherty of the Doherty Group (DG) in Omagh.

Hybrid technology used in the Logset 8H GTE and 12H GTE is an enormous step forward in using cleaner energy for the harvesting of timber as it increases the power and efficiency of the harvester’s engine while reducing fuel consumption, Co² emissions and noise levels.

The Hybrid doesn’t slow down under pressure as the motor runs at a constant pace due to the hybrid system providing up to 142hp of extra power. This allows the harvester to perform several tasks at once while keeping the engine load constant

The technology works by using two power sources; a diesel engine and an electric motor with a super capacitor for storing the energy that is generated. Engine power and torque is boosted by a massive 60% with a 25% decrease in fuel consumption and up to 30% less CO² emissions being emitted.

Logset are the first, and still the only forestry manufacturer, to offer hybrid technology in timber harvesting they have two machines the 12H GTE for final felling and the smaller 8H GTE for thinning and smaller clear fells with their first hybrid harvester made and sold in 2016.

Since its launch it has won prestigious awards around the world including the French forestry publications Bois International’s “2019 Forestry Machine Of The Year”, the Austrian Innovation award at Austrofoma and been one of the seven finalist’s at the 2018 “Energy and Innovation Awards” in Finland.

It has received the esteemed approval of the BAYSF (the Bavarian State Forestry in Germany) with the director Dr Michael Kutcher having this to say;

“I believe this is certainly the best solution available today for tackling the environmental issues without compromising high productivity .”

Michael Doherty is proud to be setting new standards in timber harvesting in Ireland as the only forestry contractor using hybrid technology.

“I have been a keen advocator of using green technology” explained Michael “and deciding to invest in the Logset harvester was an easy decision to make. The progress Logset have made with the hybrid technology is a massive leap forward for forestry.”

”With up to 420hp of power on tap and the dual hydraulic system this is the ideal choice for working productively in the tough Irish conditions.”

Richard Doherty, deputy harvesting manager and harvester operator for the DG, has been operating the Hybrid harvester and had this to say about it;

“The power of this harvester is unreal and there is so much torque in the head that the size of trees or thickness of the branches doesn’t make the slightest difference to performance. I have the engine rpm’s set at 1600 and the engine note never alters, tree size is 0.25³ and I have been averaging 23m³ per hour using 17ltrs of fuel.”

“It out performs every other harvester we have by a mile, some of our other harvester operators have tried the Logset 8H GTE hybrid and have been astonished with just how powerful it is.”

“I would also like to point out that the backup offered by RJ Fukes Forestry Services is far above and beyond what you would normally expect, there is someone there 24/7 for help and advice.”

Balcas are a forestry business who believes sustainably managed forests is the way forward and plant four trees for every one that is harvested.

The Logset Hybrid fits in with both Balcas and the Doherty Groups energy plans to reduce their carbon footprint by using technology which is productive and fuel efficient while emitting far less Co² emissions.

Michael pointed out that “Later this year we will be taking a second Logset hybrid for appraisal; this will be the larger Logset 12H GTE Hybrid which offers the same ground breaking productivity, fuel efficiency and reduced Co² emissions. The larger harvester offers 510hp with dual hydraulic systems which allows the operator to work without limitations while harvesting large heavy timber.”

All photos courtesy of Trevor Fox