Morooka MST2200: Taking A Load Off The Road 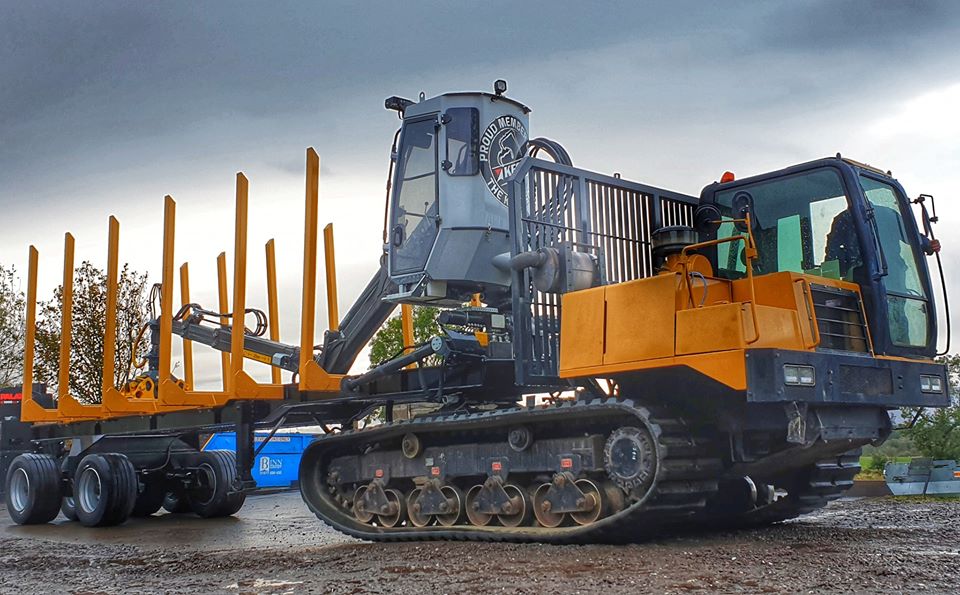 Using such specialised haulage vehicles for removing timber from harvesting sites to stacking areas near the main road can seriously reduce costs for both landowners and hauliers. Lower ground pressure vehicles carry larger payloads yet cause less damage to forestry roads and significantly reduce maintenance costs; the roads can deteriorate rapidly during harvesting operations and this can result in collection lorries requiring expensive repairs. Adverse weather conditions can be another expensive issue facing timber hauliers.

Jim was approached by a contractor using a Morooka with a homemade timber trailer for moving timber to a stacking area near the main highway rather than using his eight-wheel timber truck. The contractor thought the Morooka, which is suited to environmentally sensitive areas, would be ideal for converting to a tractor unit for pulling a low ground pressure timber trailer and contacted Jim to see if he could develop the idea further.

CFS thoroughly enjoys the challenge of exciting projects like this and there were extensive discussions prior to starting the project between Jim, Fraser Miller and Zenek Molendowski, who would all be involved in the project. The company has undertaken similar haulage vehicle projects before, so everyone had a good idea as to what was required to make this project a success. Fraser has worked for CFS for 35 years and prior to that was Jim’s
apprentice at an agricultural engineering works, while Zenek has been working for CFS since moving from Poland to Scotland 15 years ago.

The Morooka used for this project was the MST2200 model, a popular and versatile rubber tracked carrier found mainly on construction sites and pipelines all over the world. It is only 2.8m wide, which is perfect for accessing some of our narrower forest roads. Ground pressure is very low as it weighs just 13.5 tonnes with 750mm wide tracks. As the tracks are made from rubber, there is lower ground pressure and reduced damage to the surface of the road in comparison to steel tracks. They also need less maintenance and will allow the Morooka to travel at speeds of over 8mph.

The MST2200 has a floating bogie undercarriage
system which means the tracks are always in full contact with the ground. The tracks themselves are substantial and are around 100mm thick, excluding the grousers, and have idlers all along the bottom, making it difficult to throw a track. Ground clearance is an impressive 38mm and the machine is powered by a Caterpillar 250hp engine coupled to a hydrostatic transmission. Moreover, it features as standard a heated and air-conditioned ROPS-
certified cabin, backup camera and a video information display.

Few modifications were required to prepare the Morooka for transporting timber. Firstly, the rear carrier body was removed and a fifth wheel coupling fitted onto the rear chassis, enabling the timber
trailer to be attached. Secondly, the hydraulic capacity was increased by fitting a larger pump as the hydraulic system would be used to power the Kesla 2009ST loader.

The trailer was a different kettle of fish as it would have to be constructed from scratch.
To start with, a second-hand Dennison articulated trailer was used as a donor. The neck with the kingpin was cut off and this section would be used for attaching the trailer to the fifth wheel coupling. As the trailer would be 2.8m wide, the chassis was constructed and joined on to the front section of the Dennison. A substantial construction was necessary as it would spend its life on forestry roads, which can be hard on equipment to say the least. CFS decided to fit the main chassis with cross members and then add diagonal tension bars as well; this would allow the whole structure to twist and flex, rather than just an individual section, which would make it much more robust. The company came up with this idea several years ago after a large timber haulier was having difficulties with a new timber trailer. The trailer had been a disaster from the word go and constantly needed welding back together until CFS came up with an effective structural solution.

The next stage involved designing the wheel configuration so that the weight would be
distributed evenly across the road surface. There would be no air suspension on the trailer as the
Morooka wasn’t fitted with a compressor; therefore, to help the trailer absorb the shock and travel better, they decided to manufacture their own bogie for the six trailer wheels. The bogie is cleverly designed with two wheels attached to the rear of the bogie and one at the front. Standard BPW lorry hubs were used on the bogies and they were fitted with 455mm wide Maxi tyres. Because each wheel is offset to the other, there is only 350mm in the centre of the 2.8m wide trailer that isn’t in contact with the road surface.

The trailer is 9.5m long and will transport three bays of 3m produce or two bays of 4.9 saw logs with wider than standard bolsters at 2.7m.The bolsters, pins and headboard were manufactured by CFS, and they were produced with heavier grade steel for added strength.

The Morooka has hydraulic drive to the tracks so doesn’t need a braking system; it stops as soon as you release the drive joystick. For the trailer brakes, the decision was made to change the BPW hubs from air to hydraulically operated brakes which are activated from the drive joystick. These were fitted as an
additional safety feature for long, downhill extraction with the trailer fully loaded (20-25 tonnes of timber) and for emergencies. Under normal operating conditions, the Morooka is extremely capable.

Finally, the Kesla 2009ST with the cabin was fitted to the trailer and, after just over 500 hours of design and workshop fabrication, it was time for the road test. Jim and the team were delighted as the whole build had run like clockwork with no glitches whatsoever. However, with the build being a prototype project, stability when loading and manoeuvrability remained unknown factors.

Fraser drove it up the yard and turned it around and was pleasantly surprised at the way it handled –
compared to a conventional trailer it was much easier to turn and far more manoeuvrable. The unique wheel layout eliminated any tyre scrubbing when on full lock and it was easier to control and more predictable while reversing. The guys were ecstatic as both the Morooka and the trailer’s
manoeuvrability had exceeded all of their expectations; the only thing left to assess was the unit’s stability while loading and unloading.

There was no need for apprehension as it sat solid on the ground even at full reach at a right angle to the trailer. Because of its width and length the track base of the Morooka the Kesla has become one of the most stable, comfortable and confidence inspiring loaders they have ever loaded timber with – there is almost no movement at all when using it. Once all the final checks were carried out and all the boxes were ticked, it left the workshop for delivery to its new owner.

Fraser went out to check it over after it had been working for a few weeks and the owner was
delighted; it was just as quick if not quicker than the eight wheeler and was much easier to manoeuvre. Due to the low centre of gravity and wide track base it was incredibly stable and reassuring on tricky forest roads, and it was especially comfortable during travelling. Jim saw Fraser on his return to CFS and he was beaming from ear to ear with pride with what they had all achieved.

A Selection of Photos From APF 2022