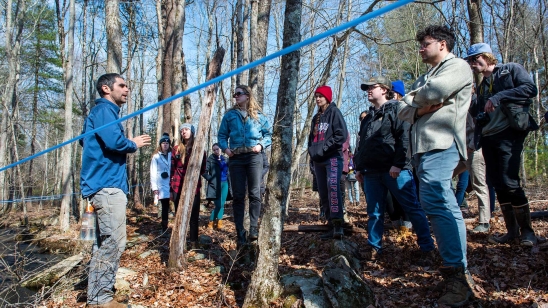 Under increasing pressures from climate change, sugar producers in New England are getting help from a new Maple Education and Extension Program led by The Forest School at the Yale School of the Environment. Director of Forest and Agriculture Operations Joseph Orefice ’09 MF is heading a new training initiative at Yale-Myers Forest in Connecticut that is promoting sustainable maple syrup production techniques and is producing its own line of syrup in the process, starting with about100 taps to yield 25 gallons of syrup.

Orefice teaches courses  in agroforestry and forest management and helps to oversee 10,880 acres of the Yale School Forests system with Yale Director of Forests  and Senior Associate Dean of The Forest School Mark Ashton and Forests Director of Research  Marlyse Duguid.  This spring, he has been hosting training workshops through the extension program  that cover sap collection, maple silviculture, syrup processing, and sustainable management of sugarbushes.

This fall and winter, with the help of students, Orefice installed tubing for taps for red and sugar maple trees at Yale-Myers Forest and built a sugar shack. With a $390,000 grant from the U.S. Department of Agriculture’s Acer Access and Development Program that offers funding to promote the domestic maple syrup industry, the extension program purchased a reverse osmosis machine that helps to cut down on the amount of wood needed to boil sap into syrup and a new trailer to produce the syrup.

“Maple syrup and sap collection is tied to the freeze-thaw cycle and the timing and extent of it is changing. It’s less predictable,’’ says Orefice, who directed and managed a 6,000-tap commercial maple and birch syrup operation in New York while working for Cornell University.

Warmer temperatures can cause bacteria and yeast build up in tapholes as temperatures rise and end the sap collection season early for syrup producers.

To enhance production, Orefice advises sugar producers to thin out their forests so that their maple syrup trees have room to grow, and their forests are more resilient to the stressors of climate change.

This is an example of a program at Yale that pretty quickly can cause meaningful change,’’ says Walker Cammack ’22 MF who’s working with Orefice. “This adds another use to the forest with a non-timber product, and it shows the diverse ways a forest can be used.”

This March, students in Orefice’s maple syrup class — Maple: from Tree to Table —visited the production site at Yale-Myers. While there, they sampled the syrup during the cooking process, learned to identify red maples and sugar maples, reviewed tree health, and ways to promote vigorous tree growth, and restored tubing and taps.

“I think that the project is important because it connects local producers to knowledge and technology that they might not otherwise be able to access,’’ says Mary Katherine DeWane ’23 MF, who has helped set up the tubing system for the trees, build the sap house, and make the syrup. “I also believe that it is a neat way to get people interested in forests and the products they can provide other than wood and paper.”

Orefice says the syrup made at the forest will not compete against any New England producers and will be Moving forward he plans to continue to promote sustainable syrup production and is hoping to expand the training workshops for sugar growers.

“Connecticut taps less than one percent of what we could be tapping,’’ he says. “There is potential to expand. We are offering this extension program to fill a niche that hasn’t been filled. We want to be supportive in every way we can.”

Yale School Of The Environment