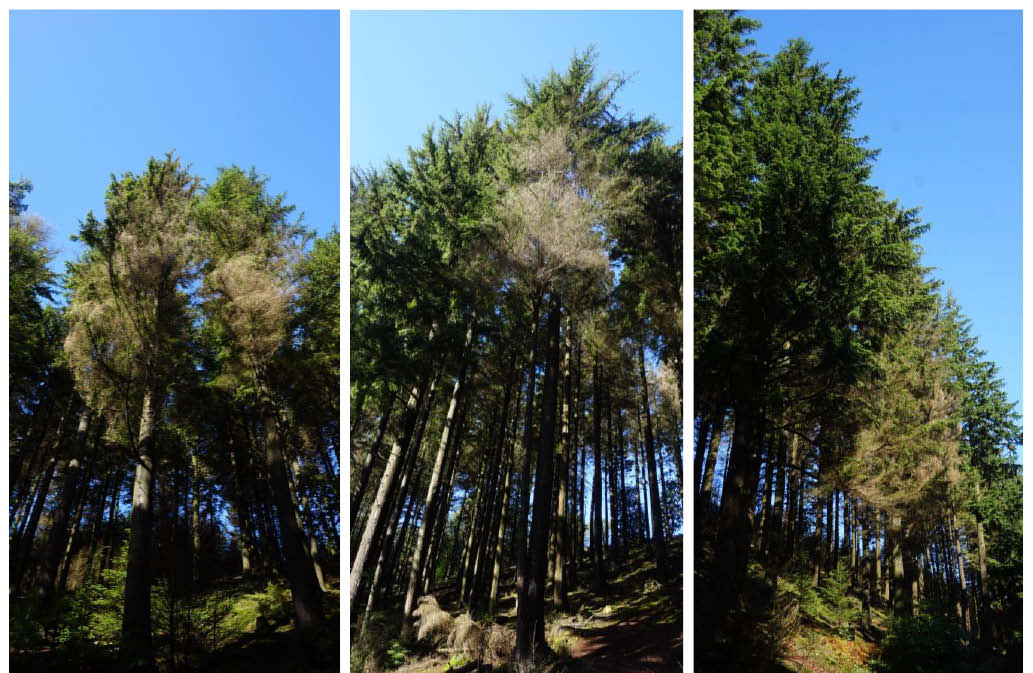 Woodland managers, landowners, tree nurseries and the forest industry are being urged to remain vigilant after the Forestry Commission (FC) introduced extended demarcated areas in Devon, Cornwall and Cumbria to combat the spread of the tree pathogen Phytophthora pluvialis.

Phytophthora pluvialis is a fungus-like pathogen known to affect a variety of tree species, including western hemlock, Douglas fir, tanoak and several pine species (in particular radiata pine). It is reported to cause needle cast (where needles turn brown and fall off), shoot dieback, and lesions on the stem, branches, and roots.

Although Phytophthora pluvialis has been detected on mature western hemlock and Douglas-fir trees at these sites, it is as yet unknown if the pathogen is the direct cause of the observed symptoms. Investigations are ongoing to determine whether other factors are at play.

Forestry Commission, Forest Research and the Animal and Plant Health Agency are rapidly conducting further surveillance and diagnostic analysis to understand more about the pathogen and ensure that any required control measures are swiftly undertaken to stop its spread. This includes extensive ground and aerial surveillance as part of a UK-wide survey, and comprehensive research and modelling to explore factors such as climatic and potential species susceptibility and to help inform the management response.

Nicola Spence, the UK Chief Plant Health Officer, said: “We are continuing to take swift and robust action against the findings of Phytophthora pluvialis, as part of our well-established biosecurity protocol used for tree pests and diseases. I urge all sectors to support efforts to tackle this pathogen by checking the health of western hemlock and Douglas-fir trees. Key symptoms to look for are lesions on the stem, branch or roots. Any sightings should be reported to the Forestry Commission via its TreeAlert online portal.”

Extensions to the demarcated areas help prevent the accidental movement of the pathogen. Additional restrictions requiring pre-notification of felling of susceptible material within the demarcated were introduced in December 2021 and continue to apply to all demarcated areas. The two Notices will come into force on Thursday 27January, reflecting these changes. Further information on tree pests and diseases, and how to identify them, is available here. Landowners are asked to report any suspect trees via TreeAlert.