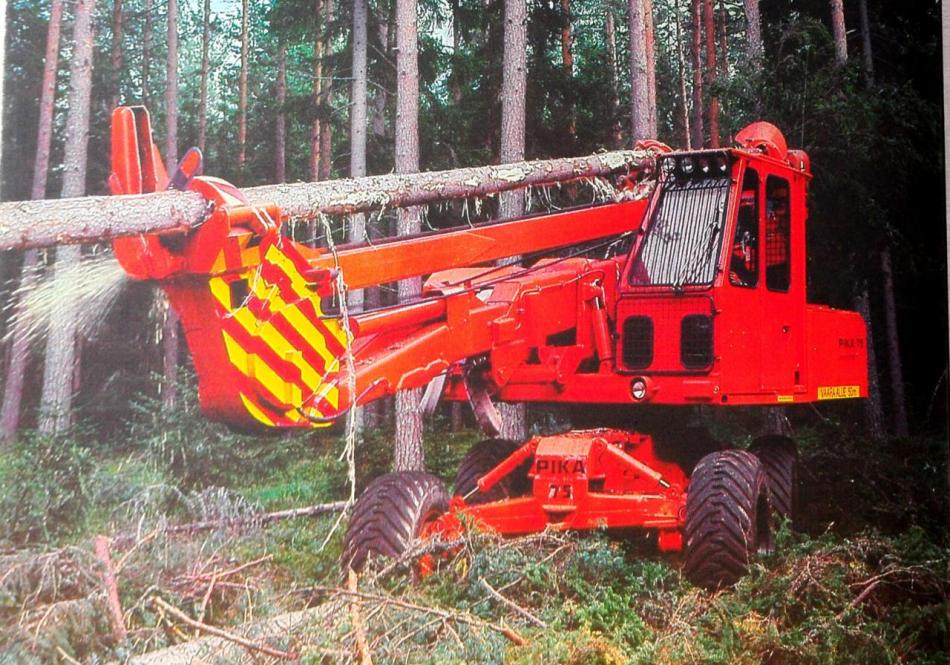 The first fully mobile timber harvester was the PIKA model 75.

It was built in 1974 by Sakari Pinomäki, a Finnish systems engineer and inventor who pioneered the mechanised forest industry.

He was the founder of PIKA forest machines and made his first purpose built forestry machine in 1964, during his career he had over 50 patents on his different inventions.

His machines differed significantly from other “retro-fitted” forestry machines in that they were designed from the start to be timber harvesting and processing equipment, and were not converted farming or earth moving equipment adapted to allow timber processing work to be possible. Pinomäki coined the term “harvester” to describe his Model 75 machine, which differs from a tree length processor in that a harvester grips, fells, de-limbs and sections the tree on site, while a processor simply de-limbs a tree that has been felled by chain saws and dragged to the delimbing equipment. His designs and innovations have been subsequently copied by at least five other major manufacturers including Timberjack, Valmet and Ponsse and were instrumental in developing the Scandinavian system of timber harvesting, which is far more sustainable and nature conserving than the methods employed up till the mid-20th century. The two machine harvester-forwarder system consequently became the worldwide standard for sustainable forestry.

One of the most significant of PIKA’s inventions has been the Paralcon valve system that can be used on any twin boom extending-retracting crane. This valve uses return oil flow pressure to power the extension piston, and flow oil pressure to power the retraction movement of the crane, as opposed to standard configurations that use additional pumps to power these crane movements. The result is that far less motor torque is necessary to operate the crane, which consumes far less fuel; this in turn saves operators money and reduces CO² emissions for the machinery in use.

Additionally, S. Pinomäki Ky PIKA was first to market in the early 21st century with the world’s first production “Combination” machine, a single machine that can function in both harvester and forwarder roles. This 50 percent reduction in machinery to perform the same harvesting work means far less environmental pollution from CO2 emissions and terrain damage from machinery operation, and has again be co-opted by every major manufacturer of heavy timber processing equipment.

Sakari died on July 29, 2011 after a battle with pancreatic cancer. He is survived by his two daughters and three grandchildren.