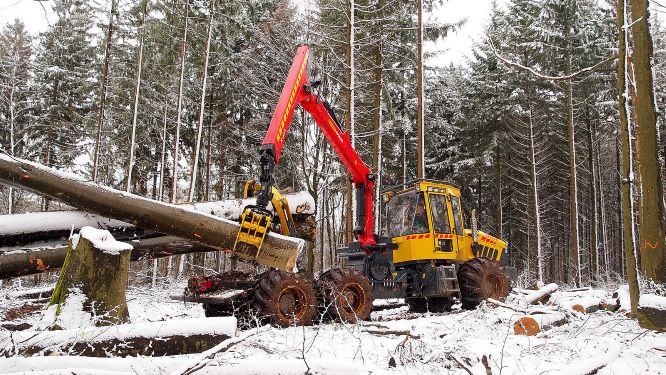 On a recent trip to Southern Germany we were visiting Daniel Shatzle “Die Baumschubser” for a few days and as a surprise he had made arrangements for us to visit the Welte Forst und Spezialfahrzeuge factory in Umkirch.

We were met by Alexander Welte, the son of the founder of the company, also called Alexander Welte, who was going to give us a guided tour. Daniel had explained that the two main manufacturers of specialised forestry machines used in this area were Welte Forst und Spezialfahrzeuge and HSM (Hohenloher SpezialMaschinenbau) and customers who had both machines were fiercely loyal to each brand.

Welte was founded in Freiburg in 1952: one of their original products was superstructures for logging trucks and in 1954 they expanded their range to include timber trucks and special flat-bed trailers. In 1958, they started to manufacture hydraulic double drum winches and as their range of equipment increased so did their production and they moved to their newly erected factory in Umkirch with 3,000 sq/m of production areas.

1965 saw the production of the very first Welte four equal wheel drive, frame-steered forestry skidder called the Forstmann fitted with a double drum winch, logging blade and forestry guarding. They continued to improve and design new skidders for all forest applications and conditions through the 1970s and in 1985 they came up with the 360-degree swivel seat which gave the operator a higher level of comfort and spherical vision of his working zone.

In 1998, the company was taken over by Werner Nühnen as a managing partner and the following year the Welte W150 150hp turbo skidder with a swivelling crane was developed. This was followed the year after with the Welte W120 210 hp multi-purpose machine which had a loader, clam bunk, winches and could also be used as a forwarder. The company has grown from strength to strength and has come up with innovative designs, for example, Weltronics with constant pulling force on the winch cable, smaller 4 wheel skidders for ground keeping applications and the first 6 wheel drive skidders for lower soil compaction.

The first 8 wheel drive forwarder was introduced in 2006 and in 2008 the first traction winches were available for working on medium grade slopes. The 4 cylinder Welte W140 8WD multi-purpose machine with a swivel cab and electric steering became available in 2010. Welte are constantly moving forward and have been recognised at various fairs for their clever designs for which they have won awards.

Currently there are three managing directors taking care of the company, Werner Nühnen’s two sons Joscha and Maik, with Alexander Welte, and they have an experienced network of employees looking after the various departments.

Our tour started at the fabrication facility where the process of building a Welte machine begins. This is where the chassis, headboards, forwarder bunks and other steel components are constructed. Looking at one of the chassis, I noticed that both the diesel and hydraulic oil tanks are incorporated in it. This is a clever idea and will help to lower the centre of gravity and create a lot more space higher up on the machine. The chassis are designed around a Welte cable winch which is incorporated into the chassis at a later stage.

Once the fabrication process is complete, the components are painted before being moved to a storage area outside the large workshop where the machines are assembled. This area also housed a huge stock of assembled bogies, hubs and differentials made by NAFF and they have to keep a large stock at all times due to the demand.

We then entered the assembly workshop where 4 machines were under the various stages of construction. The first one I saw was an 8 wheel, 200 series with rotating cabin which was almost completed. It had a clambunk attached to the rear with a powerful Palfinger Epsilon X140F crane with a heel bar fitted for handling long timber fitted with a large 43 grapple and a double drum 14 tonne winch (Welte winches are available up to a 16 tonne pull) with hydraulic butt plate. There was a 130K 6 wheel, 130 4 wheel and a 100 4 wheel also being assembled. The workshop was immaculate and spotlessly clean; the engineers work to a very high standard and every tool is returned to its home in the portable tool stations. They are on castors and easily manoeuvred so the workers have all the tools and equipment they need close to hand at all times.

Alexander explained that they build 40-50 machines each year and all the models are designed and built around each individual customer’s requirement. The W130K model is proving to be the most popular at this present time with their best markets being Germany and Switzerland but they are proving to be growing in popularity with other neighbouring countries and they have supplied machines to customers in Japan. This model is a 6 wheel drive 4 cylinder combi machine which can be used as a Clam Bunk Skidder, Crane Machine, Cable Skidder and a Forwarder. The engine is a 190PS Volvo Penta Tier 4 Final with 2 speed hydrostatic transmission. The gears give a speed of 1st 0 – 12 km/hr, 2nd 0 – 36 km/hr (the 4 wheel version will reach 40 km/hr) and has a steering angle of + / – 46 degrees.

Alexander said that they tried to make the machine as operator friendly as possible for both operating and maintenance with a roomy modern cabin which can be entered / exited from both sides, roof hatch, swivel seat with pedals and air suspension, air con etc. and the cab is certified for ROPS, FOPS and OECD. Maintenance is made easier with the tilting cabin and access to all the components is good.

Welte have a great relationship with the Albert-Ludwigs University in Freiburg, which was established in 1457 and currently has 24,000 students from over 100 nations. One of their specialised subjects is engineering and they have excellent research facilities for special projects. In 2016, one such project in conjunction with Welte was the RaLaLeg system which balances the load on rear bogies. The rear wheel on the rear bogie carries more weight when loaded but this system balances this and scientific tests proved that there was 50% less pressure on the forest floor which helped in greatly reducing rutting and soil compaction. They are currently working on further innovations with the university which will be revealed in future editions.

We had a thoroughly enjoyable and educational visit and it is brilliant to see how companies like Welte have found their place in the market by supplying high quality, reliable, robust machines which have developed a loyal customer base. There is one older model of a Welte in the UK but a second hand W130 is currently going through their service department prior to delivery to a customer west of Inverness.

Welte would welcome a dealer/service partner interested in representing them in the UK and Ireland.