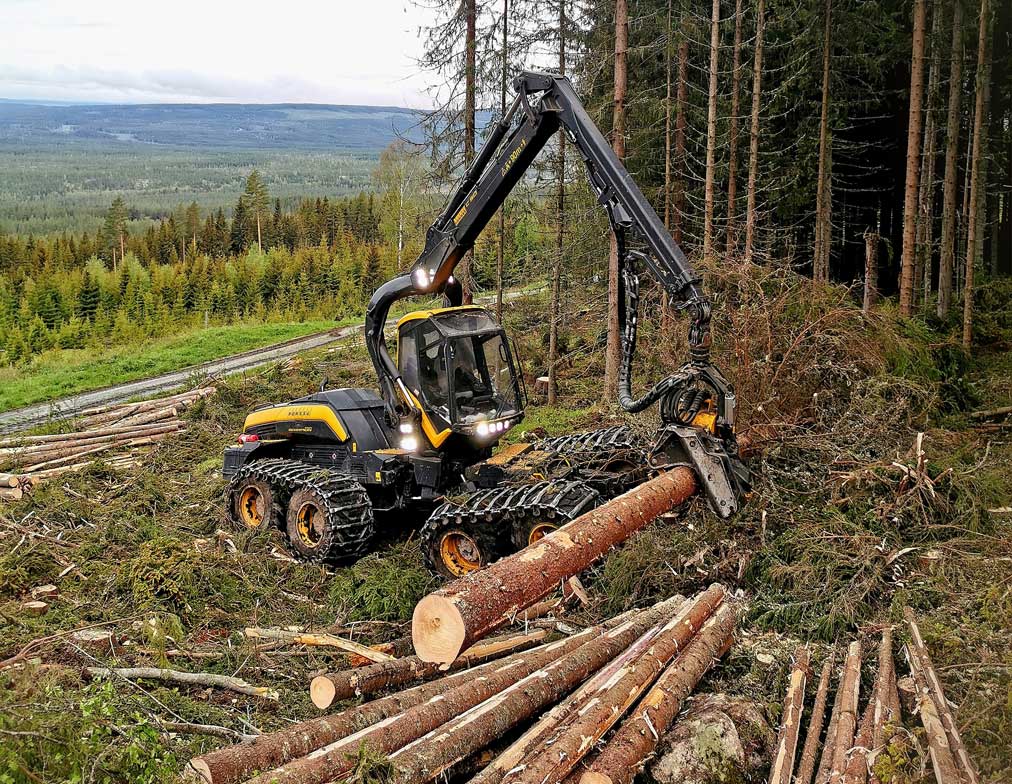 Norway has a population of over 5 million and 37% forest cover, which increases year on year. Almost 80% of Norwegian forests are privately owned, mainly by farmers. The UK is Norway’s principle trading partner as we receive the largest proportion of their exports, with Germany, Sweden, China and the Netherlands also trading extensively with them. In an issue of FMM, we caught up with Sebastian Økern Holmsen, a young harvester operator from Norway, to get an insight into how forestry differs from the UK. Sebastian was born in Oslo and his family moved to Rena in Hedmark County, a small town in the centre of Norway commonly known as the “Heart of Norway”, when he was just over one and a half years old.
Forestry in Rena is a serious business with many of the inhabitants involved in the industry. It is also famous as the starting place for both the Birkebeiner-Rennet” annual cross country skiing race in winter and the mountain biking race in summer.

In the late 1800s/start of the 1900s, the majority of the local men and boys worked in the forests felling and de-limbing the trees. The only way of transporting the timber to the big sawmills in southern Norway was with the dangerous “Log-Drive” down the Glomma River – the longest river in Norway – as this was before the days of trains and logging trucks.

Rena has very hot and dry summers which can create problems for logging operations due to the extreme fire risk. Seb remembers the summer of 2018 as it was extremely hot and dry and many of the forests were closed due to the danger of fires. In some circumstances some logging operations were permitted to take place overnight when it was cooler, but “Fireguards” would be deployed and would continue checking for over an hour after the shift was complete in case of any flare ups. In contrast, winters are naturally cold with temperatures averaging -15° in the coldest months – 2-3 metre s of snow in a short period of time is not uncommon.

Starting out Seb started out in forestry as a young boy; his uncle had his own forestry machines and from the age of 12 they would go out together on weekends, where Seb learned to operate them. After leaving school he enrolled at the Forestry School on a two-year forestry course, which included chainsaw training and maintenance, an insight into forest culture, and training in how to cut timber in the most profitable way. After a year, Seb was offered an excellent job opportunity with a progressive timber harvesting company. On consideration he decided that the opportunity was too good to pass up and left the college, admitting: “I was never really a good schoolboy and everything I learned about forestry was after I quit school – I have always liked big machines and the lure of operating a machine was just too great.”

There are three Forestry Training Schools in Norway. The one he attended had equipment that was exhausted and antiquated; fortunately, the state has stepped in with financial assistance and a modern era of training is dawning.

By his own admission, Seb is not someone happy amongst a lot of people (apart from watching Liverpool at Anfield, but we will come to that mystery later) and enjoyed his childhood learning about life by roaming in the fields, forests and countryside. He has now spent ten years as a full time professional operator for the company GM-Skogsdrift AS. He has gained experience on a variety of machines from Ponsse and John Deere and has recently taken delivery of a new Ponsse Scorpion King.

Gunnar Filtvedt, Managing Director of GM-Skogsdrift AS, started out in 1981 as a manual forestry worker in the Nedre Glommen Forest Ownenship Association (VIKEN) before moving to Rena in 1990. He started GM-Skogsdrift AS with a co-owner in 1992 – the company comprised two men with two machines before Gunner eventually bought his partner out in 1994.

GM-Skogsdrift have progressed well, establishing an excellent reputation under Gunner’s leadership, and currently have 20 harvesting machines, a Valtra tractor, a Kobelco 13-tonne forest excavator and a low loader. There are ten machine teams and they harvest 350-400,000m³ of timber on an annual basis. They utilise harvesting equipment from Ponsse, Komatsu and John Deere and are pleased with the service they receive. The company also have their own mobile mechanic for out of warranty repairs and servicing.

I wanted to find out more about the differences in the industry between our countries and wanted to know what kind of age range many of the operators were in, explaining that we would be facing an upcoming
crisis due to the difficulties involved in attracting new, young operators. Seb’s response is as follows: “With GM-Skogsdrift we have about 20 employees and nine of them are younger than 30 years old. We focus on the youth and it is important to give young people a chance so that the industry does not die out.”

“There are about 15-20 new students every year at the forestry school I attended but I think they are struggling with the work and social ethics of some of the young people today. Some are finding it difficult to adapt to the loneliness of being a machine operator and can spend too much time communicating with friends via social media, and this affects their performance at work.”

“For me it is very different; I love the outdoor life away from busy towns and cities. My hobbies include mountain hiking, running, fitness training and fishing. We do a lot of these activities as a family with my wife Lisbeth and our two children, Ida who is six years old and Emil who is three. I consider my job as another one of my hobbies and some of my free time is spent walking and planning how to harvest my next job site.”

Next up was the big million Dollar (or Norwegian Krone) question: are welfare units compulsory on job sites?

“We are not required to have them just now but it might be the case in the future”.

I asked Seb about dealing with repairs and general maintenance.
“We carry out minor repairs ourselves and the company mechanic, or dealer if the machine is under warranty, will come out when we need more assistance. Breakdown time is expensive so we try to be as organised and efficient as possible to reduce this.”

“I used to work 65-70 hours a week, but now I do about 50-55 hours which allows me more family time. I am paid by the m³ – I really like this system because if you are good at your job you can make a lot of money.”

“I work in clear fells all of the time and usually cut 45-50,000m³ each year, but this can vary if we are harvesting in smaller timber. Our ancestors have cut a lot of the easier and accessible timber using horses and carriages then later tractors to extract it. Many of the forests we harvest today are much further from the roads and are on very challenging terrain; we often use excavators to dig roads to get better access.”

“Our timber markets are generally good – some sawmills are only about one hour away from us and we supply several different sawmills including Etorna
Enso-Moelven and Sodra. We harvest close to our neighbours in Sweden and they are a major importer of wood so they are also good customers.”

“We are feeling some of the effects of the beetle blight which is affecting Germany, Switzerland and Italy and we have seen an increase in imported timber arriving, but it is not affecting us too much.”

“Our straight, good quality logs without defects are used for building houses and sawn timber, the smaller and poorer quality timber, is used for paper, cellulose and woodfuel.”

I was also intrigued to find out how someone born and bred in Norway became a diehard Liverpool FC supporter:. “My dad loves Liverpool Football Club so I grew up watching them on TV. They are very close to my heart and I have become obsessed with them. I try to get over to Anfield at least three times a year to see them playing but the prices for games in the UK are totally wild.”

Finally I asked Seb if he thought he would be in forestry long term: “Forestry is not just a job, it’s a lifestyle and something I look forward to spending the rest of my life doing. Who knows, perhaps someday I might be in a position to start my own forestry company.”

It was fascinating to learn about forestry in another country, especially from someone who is at the cutting edge of the industry.