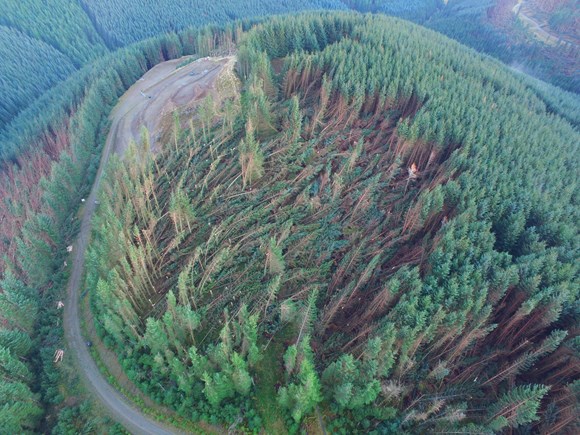 That’s the key message from Scottish Forestry a year on since Storm Arwen’s vicious winds brought down vast swathes of trees across the north east, through Tayside and into the Scottish Borders.

Statistics produced by the Forest Research agency now show that, including storms Malik and Corrie, around 9,300 hectares of woodland were damaged – the equivalent of around 18.6 million trees or 2 million cubic metres of timber.

A concerted effort by the forest industries was quickly put into action after the storms to deal with this sudden availability of fallen timber.

However, even today, the extraordinary challenges caused by the storms mean some woodlands are still to be cleared.

Jason Hubert, Scottish Forestry’s Head of Business Development said: “We’ve not encountered storms as vicious as Arwen for many years and its affects were quite devastating for many woodland owners. The direction and ferocity of the wind meant many trees were simply not able to withstand the onslaught.

“With climate change having negative impacts on future weather patterns we can probably expect windier and wetter winters.

“We need to create more diverse forests with different species, sizes and age so that they can handle extreme weather events better. This will take time but we can plan our future forests now.”

Comprehensive guidance on adapting forests and woodlands to tackle climate change was published in the summer. It stated that carefully considered design plans of woodlands should include a wider variety of tree species, use natural regeneration and careful seed selection to create stronger more resilient forests.

Diverse forests and other lessons from Storm Arwen were discussed at a meeting this week (23 Nov) with the forestry sector and Scottish Forestry. The feedback will help improve the response to future storms.

While there is little at the moment that can be done to prevent storm damage, the forest industry can ensure that staff are safe and prepared by signing up to Met Office weather alerts.

Foresters and forest machine operators need to be closely engaged with Local Resilience Teams to safely play a part in the immediate response, re-opening roads and helping the utility providers restore power.

Storm Arwen was the first time that satellite information has been used to quickly measure the extent and distribution of wind damage to forests and the experience has allowed the processes to be refined.  This information helps the forest industry to reallocate capacity – management, harvesting machines, haulage and sawmilling so that as much of the timber as possible can be marketed and used.

In Scotland, landowners still require permission from Scottish Forestry to harvest most windblown timber and to ensure forests are suitably replanted. This administration was fast-tracked after Storm Arwen but the clear up is continuing and the process will continue to require landowners and managers to plan the recovery.