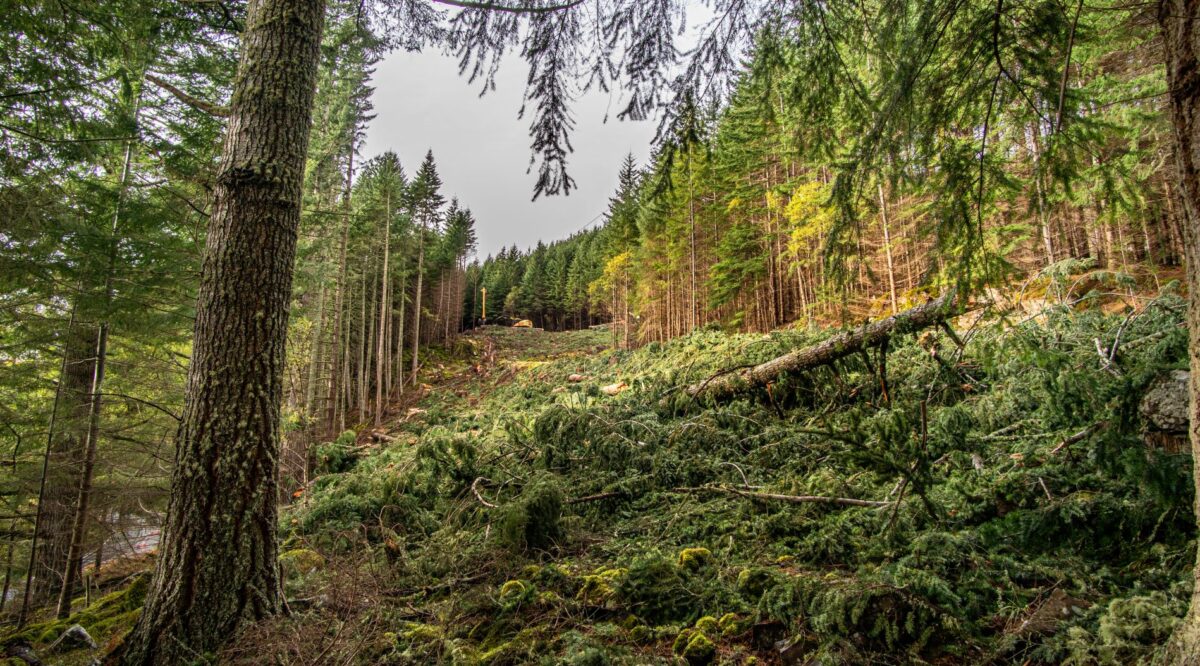 Forestry and Land Scotland’s North Region team is more aware than ever of the importance of its Steep Ground felling programme along the Great Glen as parts of the country deal with the aftermath of Storm Arwen.

The Storm which battered the east coast and south Scotland with winds of up to 100mph at the end of November has resulted in around 8 million trees being blown over, families left without power for days and many popular forests closed for public safety reasons.

Had the storm funnelled down the Great Glen, the impact on the forests – despite the safety measures that are in place – could have seen significant.

The potential for serious interruption of traffic on the A82 could also have had a major impact on local communities, businesses, the emergency services and on the rural economy.

“The forests on the hillsides above the A82 alongside Loch Ness were planted nearly 100 years ago  and have reached a size where they are susceptible to windblow.

“That’s the main reason that we are engaged in this long-term programme to fell and extract the over-mature conifers in a planned manner and see them replaced by native woodlands that will, over time, increase the stability of  the hillside.

“It will make the landscape – including the A82 and the  infrastructure that runs alongside it – more resilient to the sorts of events, like Storm Arwen, that we may be seeing more of in the years to come.

“Our operations are carefully planned to the smallest detail and catch-fencing is in place at each site we work on to protect the roadway and utilities.

“However, while these protection measures work well and have been designed to very high tolerances, a storm of that ferocity could have resulted in damage to the road, power lines and fibre optic cabling that could have taken weeks, potentially even months, to resolve. The potential disruption to telecommunications, electricity supply and to traffic flows would have had far-reaching consequences.

“There would also have been a significant impact on habitats in and around the Loch, some of which carry special designations.

“We’ve all seen the damage that was done by Storm Arwen across the east and south of Scotland and while we’re all grateful that it didn’t come our way, it has sharpened our focus on completing the job as efficiently and effectively as possible.”

The Met Office headline for future climate prediction is a greater chance of warmer, wetter winters and hotter, drier summers.

FLS and other land managers are likely to be dealing with the impact of November’s storm for months, and potentially years, to come. Storm Arwen is being seen as a timely reminder of the importance of forest and landscape adaptation.

FLS’ adaptation work includes the woodland creation programme at the Rest & Be Thankful in Argyll and adapting forests by planting a greater mix of species at different times to create a patchwork of forests of uneven height – actions that will help to dissipate wind gusts and offer greater protection for the forest.