New powers to crack down on illegal tree felling 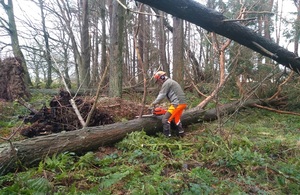 Unlimited fines and prison sentences are amongst a package of new powers to be introduced as part of a crackdown on illegal tree felling in England, Defra and the Forestry Commission announced today (Friday 23 December).

Delivered as part of the world-leading Environment Act, changes to the Forestry Act 1967 will deliver more proportionate, impactful and enduring enforcement options. The key changes are:

Landowners have been known to fell trees without a licence in place, in readiness to accept the fine if they are caught and penalised, to repurpose the previously wooded land for commercial reasons. These new powers will curb this illegal practice, streamline and strengthen forestry enforcement administration, and serve to protect our trees, woodlands and forests

The largest fine issued in recent years following a report of illegal tree felling to the Forestry Commission took place in Hailsham, East Sussex, in January 2020. Hastings Magistrates Court issued a fine of almost £15,000 for the felling of 12 oak trees, all approximately 150 years old.

Forestry Commission Chief Executive Richard Stanford said: “I am very pleased to see these new powers written into law; as we expand the numbers of trees in England, we must end the blight of illegal tree felling.”

“Legal tree felling is part of normal forest operations and essential to ensure a sustainable timber supply and these areas are restocked with new trees. The Forestry Commission will not hesitate to investigate allegations of illegal tree felling. Once reported, our top priority is to make sure the harm caused by the felling is put right by ensuring trees are replanted wherever possible. In cases which merit it, we will always seek prosecution.”

“These new powers will hit people where it hurts – in their wallets. By guaranteeing that illegal felling is no longer a financially viable option for offenders, these measures are a significant step forward in the fight against this offence and will help in our endeavours to fight the climate emergency and nature crisis.”

Abi Bunker, Director of Conservation and External Affairs, Woodland Trust said: “This is a welcome announcement which should strengthen protection for trees in England. These changes should send a clear message that felling trees illegally, for example prior to submitting development proposals, will not be tolerated, and that the penalties reflect the value and many benefits trees bring to our towns and cities. It is important that this is backed by increased resources for the organisations that deal with the enforcement of illegal felling. We hope this is a step towards better protection of trees and recognising and protecting our oldest trees as essential parts of our heritage and the most important for climate and nature.”

Finally, the Forestry Commission will have powers to compel the landowner to provide information regarding who else has an interest in the land, including leaseholders and tenants. While the owner will be listed on HM Land Registry, demonstrating who occupies a woodland can be more challenging – these measures will improve visibility in this regard and help to better target any appropriate enforcement action.