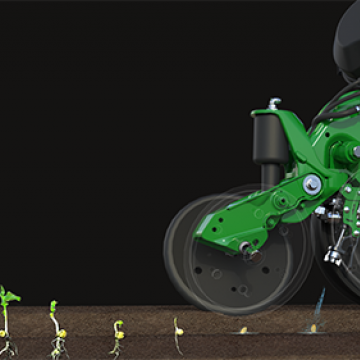 Everything we do at John Deere is focused on real purpose and real impact. This means we’re developing technology like ExactShot that enables our customers to provide the food, fuel, fiber, and infrastructure that our growing global population needs.” Jahmy Hindman

ExactShot enables farmers to reduce the amount of starter fertilizer needed during planting by more than 60%, notes Deanna Kovar, vice president, production & precision ag systems at John Deere. Rather than apply a continuous flow of fertilizer to the entire row, the technology uses sensors and robotics to place starter fertilizer precisely onto seeds as they are planted in the soil. Using a sensor to identify when each seed is planted, ExactShot then applies only the amount of fertilizer needed, about 0.2 ML, directly on the seed as it goes into the ground.

Kovar says that across the U.S. corn crop, ExactShot could save over 93 million gallons of starter fertilizer annually and prevent wasted fertilizer from encouraging weed growth or increasing the risk of running off the field into a waterway.