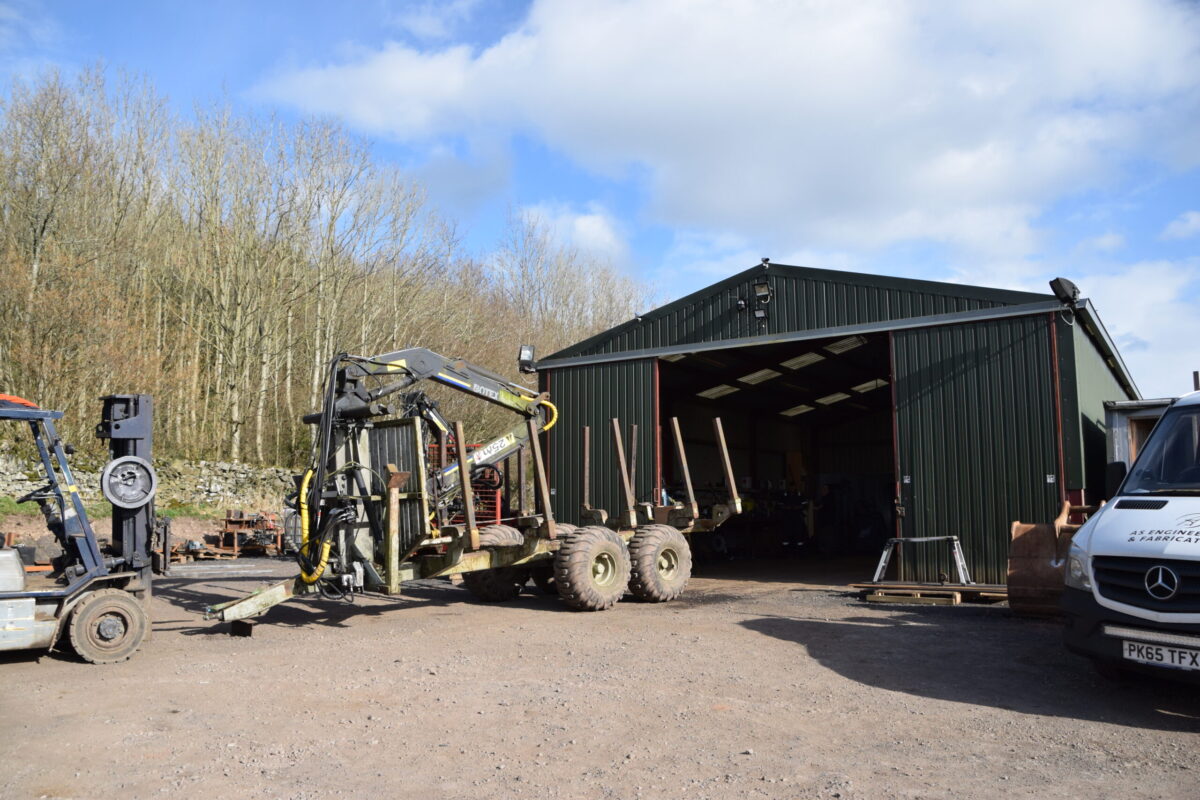 Adam Scott, the proprietor of A.S Engineering and Fabrication, is a forestry engineer and designer based in Dumfries and Galloway. His workshop is easy to find and is based just outside the village of Dunscore, a short drive off the main A76 trunk road, not far from Auldgirth a few miles east of Dumfries. The workshop and yard have good access and are easy to navigate for low loaders with large scale forestry equipment. Adam was busy in the workshop when I arrived, he was welding together a pair of two-man welfare units which he had designed himself for a customer.

After leaving school Adam attended an engineering course at the Barony College in Parkgate and went on to specialise in forestry engineering servicing and repairing Lako Forest Oy harvesting heads with Brian Hastings. His engineering career took a surprising turn while on holiday in Australia. His hire car broke down in the desert and had to be towed to a nearby repair shop. While waiting to find out how long it would take to repair, he began chatting to the owner and discovered he was looking for a mechanical engineer to work within his company. Adam was offered the job and spent the next six years working in Western Australia.

Once the mix of sawdust, oil and grease gets under your fingernails its difficult to pursue another career path. The lure of working in forestry became too much for Adam so he made the decision to return home. He was thoroughly enjoying being back working in forestry when out of nowhere, the 2009 recession hit, causing building and construction work to grind to a halt. The knock-on effect for forestry was disastrous, there was literally no demand for round timber and Adam found himself at a loose end.

Luckily, he found work with an explosives company which had a specialised engineering division for mining, ironwork, and machine welding. This was a handy stopgap, but it was never intended to be a permanent move as the work was workshop based.

Once the building and construction industries re-started, forestry started to pick up as the demand for sawn timber gained momentum. This prompted Adam to take a slight diversion in his career, instead of servicing and repairing forestry equipment, he decided to operate a forwarder.

He took a FMOC course at the Barony College and after successfully completing this started operating a forwarder professionally. Although we had never met, we did have a slight connection, as Adam drove the Ponsse Buffalo that I had previously operated for the Dick Brothers Ltd. Adam operated forwarders for five years before returning to forestry engineering when he joined the Jas P Wilson team at Dalbeattie. For the next three years, he not only carried out engineering work, but was also charged with designing and creating new and exciting projects.

Last year Adam made the decision to start up his own forestry engineering business. This has proved to be a good move, as he has been inundated with work from the start. He has a well-equipped workshop capable of carrying out all types of work from small repairs to large engineering projects, stainless steel and aluminium welding. He has a fully fitted out pick-up with a three-phase generator for tackling on-site projects and repairs and will travel up to a 50-mile radius from his workshop for on-site work.

Adam loves the variety that his business brings. On my visit, he was in the final stages of making the two welfare units plus he had a Botex forwarder trailer that had undergone various modifications in the yard ready for delivery. The owner of the trailer wanted to improve the amount of bogie travel for better performance on rougher terrain, so to accommodate this Adam increased the length of the bogie pivots by 35mm. Longer wheel studs and wheel spacers were added so that there was enough clearance between the bogies and tyres. One of the wheel bearings was replaced as it was badly rusted and pitted, the other three were checked and repacked. Other work included a new extension roller, machined and fitted, as the old one had seized solid and hot cross bun wear pads were fitted to reduce the side-to-side play on the extension. New aluminium handles were machined and installed on the hydraulic valve block as they were missing when the trailer was delivered.

Adam is enthusiastic about his work and was keen to show me photos of his most recent projects. One such project was a temporary repair on a forwarder chassis to prevent flexing and allow it to continue working. The chassis strengthening plates are currently being drawn up, cut, and folded and will be welded on, solving any further issues. Other repairs include repairing the main boom on a harvester, repairing a broken roller arm on a harvesting head, forwarder headboard repairs and machining replacement crane pins.

A big project he recently completed was for Ponsse UK. Adam designed, made and fitted a raising/lowering butt plate to transform a 6WD Ponsse Ergo harvester into a skidder for extracting large timber.

“It was an interesting working along with Ponsse and the customer so I could picture exactly what they wanted”, said Adam. “Ponsse removed the harvesting head and replaced it with a large timber grapple and heavy-duty rotator onto the C5 crane then delivered the Ergo to me. Once all measured up, I got the CAD drawings done on the computer to send to Southwest Engineering so they could start laser cutting and folding the steel profiles.

“Once I got the profiles back, which were incredibly quick, from the guys at southwest, I tacked them together and did a test fitting to make sure it all worked as it should. It was then removed, welded, and painted before being re-fitted and ready for collection by Ponsse. After Ponsse had finalised the rest of their alterations, the machine was delivered to the customer, and I went out on site to add a few finishing touches and to try it for myself.

“The top of the butt plate was serrated to grip the logs so, when placed on it with the grab they wouldn’t slide off during extraction. Keyholes for choker chains were cut into the butt plate could be used if needed. I went on to skid out some large logs of around 800mm in diameter, it was good to get the opportunity to chat to the customer and know that he is happy with his unique skidder.”

It was a pleasure chatting to Adam, the quality of his work is excellent and returning customers are a good indication that it wasn’t just me who thought that. It’s reassuring to know there are people like Adam that can advise us on the viability of our designs, get us up and running again when disaster strikes or manufacture a fire pit where we can get together over a beer and a burger and put the world to rights!