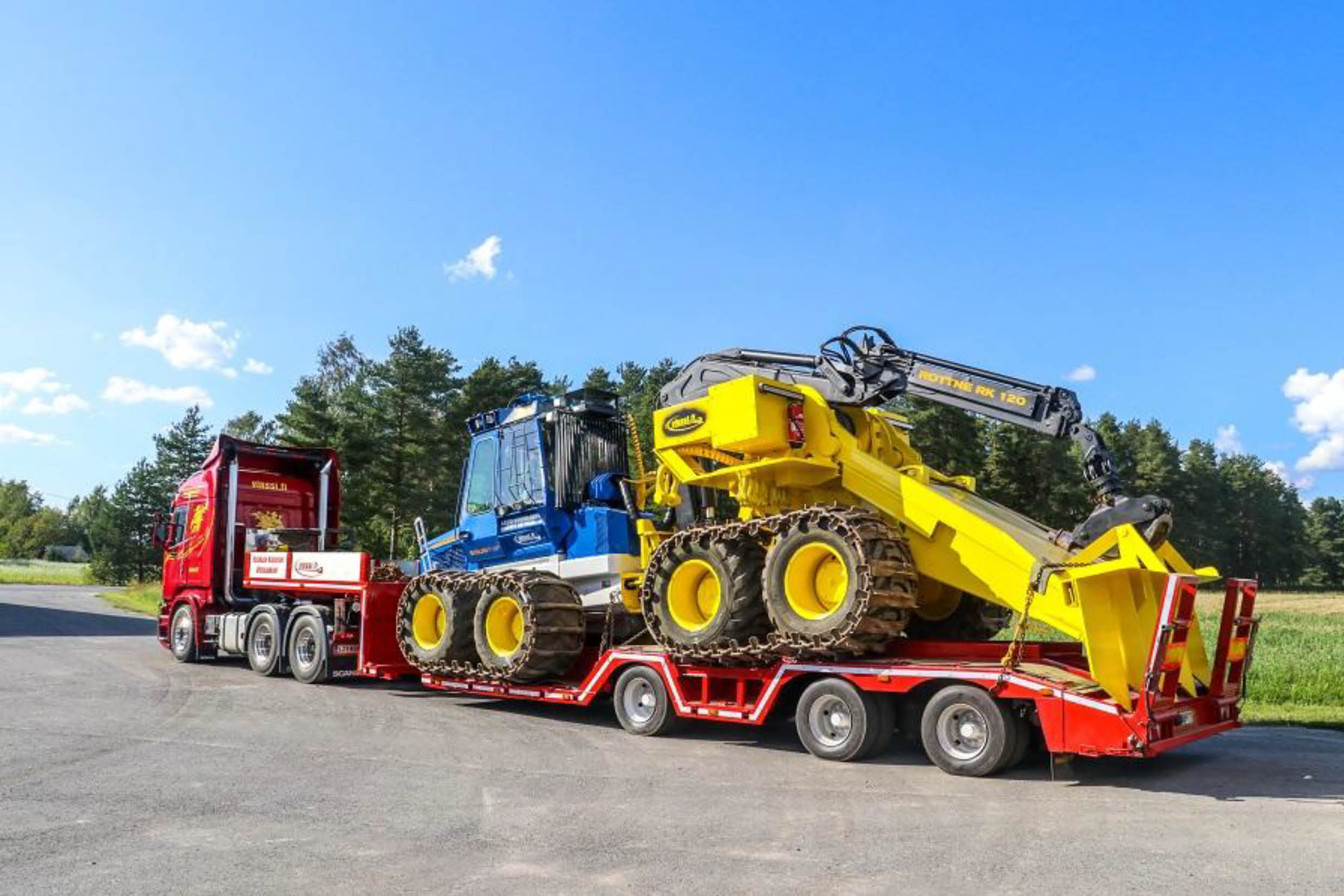 Just like the fire brigade, Arto Vuorijärvi from Kauhava and his shiny red Scania lorry loaded up with his specially built Rottne F12 de-bogging forwarder, are fuelled up and ready to go anywhere in Finland at the drop of a hat.

It all started when Arto Vuorijärvi was in his 20’s. He was living in Kauhava and was employed at the Jorma Lillbacka factory. This was the foundation of Arto’s entrepreneurial hopes and dreams. He started out working as an engineer and his skills were soon recognised as he quickly progressed to become the industrial adviser for the Jorma Lillbacka Power-Park, this is an amusement park in Alahärma.

“You could only work eight hours a day, being young and enthusiastic I wanted to work much longer, one of my co-workers, who was also operating a forest machine at the time, suggested that I build a recovery winch. This is where it all started.

My first winch was tractor-driven, it worked well enough but manoeuvring it around was quite a challenge. Firstly I had to make some money before I could even think about being able to afford to upgrade my equipment and purchase a Rottne Blondin,”

In a winching career spanning over three decades Vuorijärvi has de-bogged more than 800 machines and the tractor unit has only ever broken down once.

“The 400 tonne pulling force winch has been 100% reliable and has never let me down, the main cable is 120 meters long but we can extend it so we can winch from a distance of up to 1km. It took quite a lot of thought in the beginning to build an efficient winch which was strong enough but we got it right as we have never run out of pulling power. Band tracks are used to increase the traction power of the base machine”.

When the Rottne F12’s first started arriving in the Finnish forests from our neighbours in Sweden we were delighted as we had found the perfect base machine to replace our faithful Blondin. The F12 was a lightweight 8WD forwarder which is ideal for travelling on wet and boggy ground.

“This wasn’t a straightforward project and a lot of ideas were banded around before a design was agreed on and work could actually commence. The large wheels and low ground pressure of the Rottne F12 ticked all the correct boxes” said Tatu Rintamäki a forestry machine operator.

Once we had all agreed on the base Peurala worked on the winch gearing, Vuorijärvi was responsible for the fabrication work and Suomen Työkone Oy designed and implemented the hydraulic system”.

Arto wanted this new winch to be fully hydraulic as the previous one had been mechanical. “The main advantage of using a hydraulic winch is that the winding speed of the winch is fully adjustable and offers a smooth and powerful pull when under load. This is much safer as there is no snatch and reduces stress and damage to the equipment.

We made the ground anchors so they could be raised and lowered with hydraulic rams, Tatu came up trumps with the design and the end result was much better than I expected.
I had much more time to spend on fabricating them than I initially thought. When Covid-19 descended all my holiday plans for the year were cancelled and I spent all summer in my workshop.

Everything was built for strength, most forestry and construction equipment is made so that although strong it is not overly heavy, with our winch it was the opposite and we made it as strong as possible.

Another alteration we had to make was adding extra cooling so we could work in the hottest of summers as well as the cold winters.

Our new Rottne has much more power than its predecessor – I can safely say that there is sufficient power for our requirements, the only addition is band tracks for lower ground pressure and increased traction. Theoretically, the winch cable is the weakest link in the equipment, but it’s much stronger than before and nothing gets tangled up. The real challenge is the anchor points of the equipment we are winching,” Vuorijärvi states. “Our biggest challenge is attaching the winch to the bogged equipment, the anchor points are often to weak or in some cases they don’t exist at all. When the machine is severely bogged getting the winch attached can be a daunting challenge on its own. Good preparation is more important than the task itself; first, we need a secure and strong anchor point. When the machine starts to move you need wooden bearers or something similar in

front of it so it has something to climb up onto. One machine was a nightmare and we pulled it 250m before it climbed up onto the surface”.

In mid-August, the machine was still new and shiny as It hadn’t been put to any real tests yet. “So far, I had only de bogged one excavator and moved a large rock,” Vuorijärvi says. “The rock in question was between 150 and 200 tons and I winched it about 100 metres from a field to a garden, this was still well under the maximum pull of our new machine. We were going to do a presentation with the Rottne for the Finnish Forestry Department in the autumn, but due to the current Covid situation, the plans were changed.

“Recovering bogged equipment can attract interest from curious members of the public. A successful recovery is collaboration between the machine owner, the operator and me. I assess the situation and pass on my opinions but the final decision is made by the customer who pays the bill”.

The past year has been fairly peaceful

Vuorijärvi recovers about 25 machines each year, usually one every two weeks, he also will operate equipment for local farmers during harvest time. He also carries out contract work with his own excavator and does engineering work in his workshop. His customers know that his recovery business takes priority over all his other work but since the outbreak of Covid his call outs for recoveries have decreased but luckily he has had plenty to do keeping up with his other work.

“Excavators account for about 90% of my recovery work with the remainder being forestry machines and equipment that has fell off the back of a lorry and ended up in places like ditches”.

“My advice is that as soon as a machine starts to get bogged stop immediately and ask for help, trying to get out on your own often makes the situation far more serious and can cause a lot more damage. Getting assistance from a nearby machine can often eliminate the need for me and my winch. When the engine submerges and the water starts to rise so does the repair bill “ says Vuorijärvi with a wise wink.

The minimum charge for Vuorijärvi’s winching service is five hours with all his travel expenses on top, after the machine has been recovered successfully the customers are delighted and never complain over prices.

“Often other machines have been used to try and recover the bogged machine and end up in the same situation. One time a customer called and thought I was too expensive so he used another machine for the recovery. This machine also got stuck so he called in a third machine which got stuck as well; he soon changed his mind over my prices then”.

Tatu Rintamäki and Arto Vuorijärvi got to know each other back in June 2009, Tatu was operating his father’s Timberjack when he got bogged. “I had been taught that if I ever got bogged I was to stop immediately and call for help. I phoned my father who in turn called Arto and within an hour he was on site. I questioned whether it was worth getting outside help as it wasn’t severely bogged. My father explained that if you calculated the cost of moving another machines to my site, operator costs and the loss of earnings while it was de-bogging me then it would have been more expensive and with no guarantee of success”.

Arto Vuorijärvi has travelled beyond Finland with his winch “I have recovered machines from all over Finland and also been to Estonia and Sweden, I have been asked to travel to Russia and East Germany but that was just too far to go.
Four Excavators and two winches had been trying for over a week to recover a Finnish contractor’s bogged machine in Estonia. In that time they had only succeeded in moving it one meter, when the Finnish contractor contacted me for the third time begging for me to help him I just couldn’t refuse. Once I arrived it took me just three hours to get the machine out”

Vuorijärvi has recommended that contractors who are working on soft ground to purchase extra insurance cover which includes any recovery costs . “As far as I know, they have worked very well, even those who have broken through weak ice. With insurance, you can get the help you need and not have to worry about the costs and they also compensate you for any damage caused to the machine.

Although when machines are bogged the circumstances may look similar but from my experience no two recoveries are ever the same. Some have more resistance and bring more challenges than others but no matter what we face we always get there in the end”.