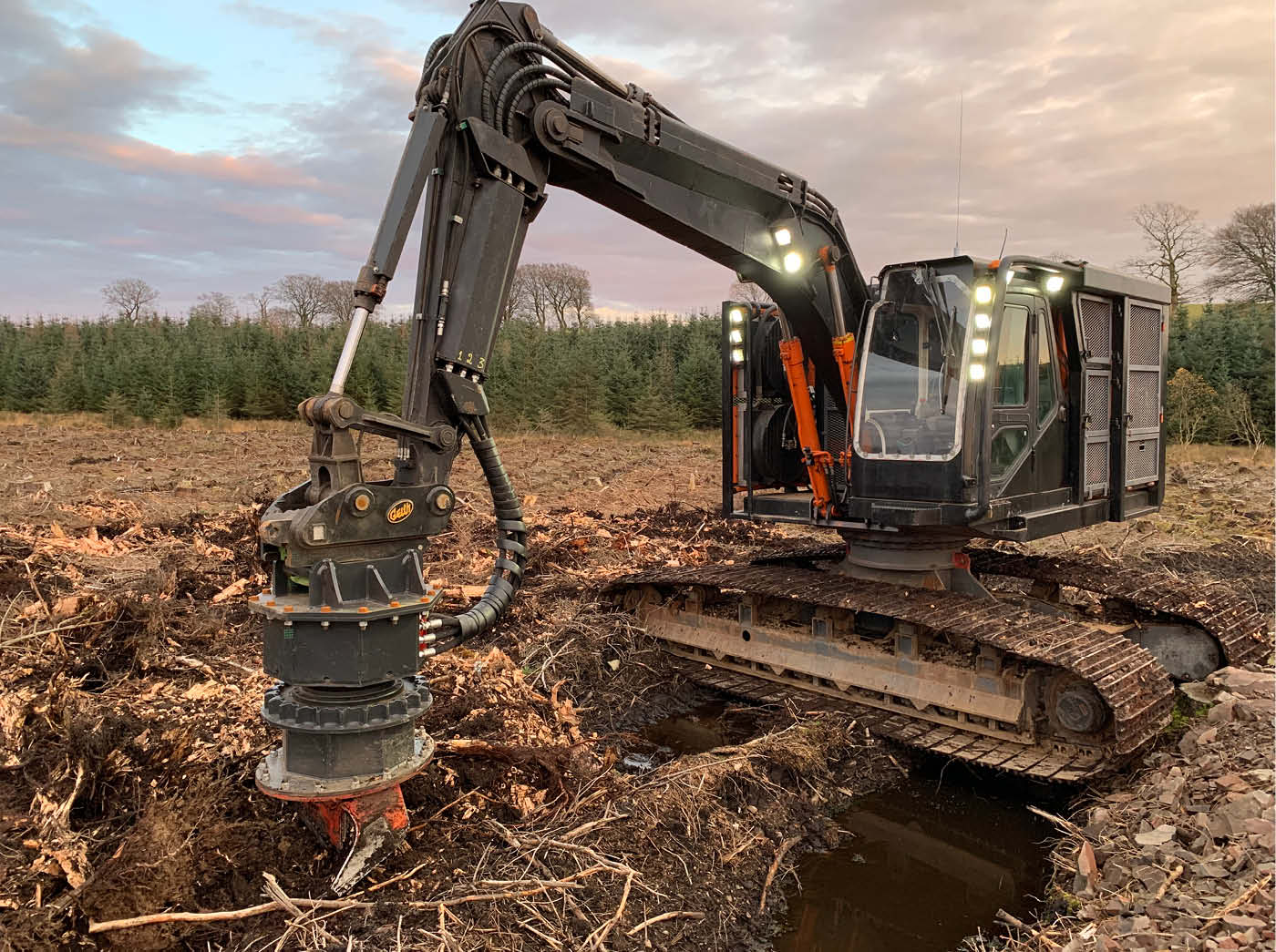 Justin Kingwell of Kingwell Holdings Ltd. and Bob and Graeme Little of RGL Plant (Moffat) Ltd. are names that many in the industry will always associate with mulching.

What many people may not know, is that there has been a close friendship and engineering collaboration between these men for a number of years. RGL have built and modified equipment for Justin, as well as being heavily involved with prototyping and manufacturing machines as unusual as machines to incinerate sheep (dead, of course) and even one that destroys live small arms ammunition from war zones to enable scrap recovery of the valuable materials (don’t ask).

Alongside, and even long before the mulching business, Justin has also been heavily involved with grinding and processing stumps. This ranged from building early machines that grafted pedestrian stump grinders to mini excavators, right up to a 500hp monster that was based on a 25-ton Komatsu excavator. Later machines included modified forestry mulchers with drum grinders and even primary shredders to cope with stumps with metal contamination. In fact, looking back through his extensive collection of photographs, dating back to the late 80’s, I would say that there are not many people in the industry today who could match the sheer numbers of stumps that this man has processed.

As I mentally prepared myself for what was clearly a subject that could be discussed in great detail and at great length by Justin ☺ I did ponder that if ever Mastermind was to call, I was looking at the future UK Champion – specialist subject “stump processing”, so with that in mind, I think it’s probably best if I let the man speak for himself.

Conventional thinking and in fact the majority of thinking with regards to removing stumps that are still in the ground has revolved around spinning circular discs or drums in the vertical plane, equipped with various types of cutting tools and with varying amounts of horsepower and mounted on various types of carriers. This concept, that many accredit to Gary Vermeer, has remained constant until the Italians arrived with their Ferri Rotor augers and coring machines. Augers are not new and neither is anything else in the stump grinding world, so it’s safe to say that pretty much every engineering solution possible has now been explored when it comes to removing, grinding, shredding, augering or fragmenting stumps.

Stumps are one of nature’s design masterpieces. They hold up enormous trees, often in just a scrape of rocky dirt, that exert almost mythical amounts of leverage upon them, whilst operating as an irrigation and feeding device that will maintain some species of trees for literally thousands of years. Even on third rotation conifer sites, the original stumps will often still be completely intact and can present significant challenges to modern forestry practices. Not only do they present a physical obstacle to clamber over for the mounding excavators, they can also harbour the highly-destructive Hylobius abietis weevil, that await the newly-planted seedlings to ring bark. Stumps also take their time to rot away (if ever) and encapsulate boulders and soil that can wreak havoc for grinders and shredders.

Nevertheless, modern forestry might now be looking for a solution. With establishment costs that can range between £3,000 and £9,000 per hectare to get new seedlings to year 5 in high population weevil areas and the ever-increasing demands on brash recovery for the biomass supply chains, it is becoming more desirable to find a solution to removing weevil habitat whilst reducing the reliance on chemicals, as well as looking for alternative sources of nutrient to replace that contained within the missing brash. Furthermore, as technology marches ever on, new machines to mechanise establishment and planting are being constantly developed and there isn’t a single one of these that wouldn’t benefit from a flat site.

Alongside the commercial plantation sector, the drive towards carbon capture/storage and the restoration of unsuitable and undesirable previous commercial conifer plantations has now grown to be a sizeable industry and the removal of stumps on these sites has largely centred on flipping them upside down or digging them up and removing them, often at the expense of any existing and established flora and fauna.

When considering conventional disc or drum grinders, large amounts of kinetic energy for spinning the drum or disc are always required to chip stumps into small pieces, but the trouble with kinetic energy is that when it meets an immovable object like a rock, something has to give and this is usually the stump grinder itself.

I have been down this road many times in the past and I have built ever bigger and more powerful machines, with varying degrees of success. It all depends on the ground conditions. In the South we have sand, flint and clay, both of which wear the metal away at an alarming rate and in the North, we have rock, more rock and sometimes very aggressive soils, as well as lots of peat and a lot of this peat has rocks in it as well! Things are further complicated in the North with combinations of soft ground, steep slopes and very large and tough stumps, that almost always incorporate some degree of rock!

Bob and Graeme Little (and Wul of course) and myself have spent quite some time over the last few years thinking about stump grinders, slow-speed augers and grinders and a few past prototypes and working machines still sit rusting away at the RGL Moffat yard to this day. The issue has always been that there is no market for the technology, as until relatively recently, stumps have not been too much of a problem. An inconvenience, sure, but not a massive issue. Cheap chemicals, cheap mounding rates, cheap planting and beating up costs all added up to a problem that didn’t really need solving, but with the trend towards lifting brash and the ever-increasing damage from weevils, we thought it might be worth revisiting our earlier ideas.

The arrival of the Dipperfox auger was interesting and it certainly has a place on some sites but mating an auger to any size of standard excavator is always going to be a compromise without the power and torque that is required to chop up or slice up stumps. Try chopping up a stump with an axe or cutting it with a hand saw or splitting it with a hammer and wedges, you’ll soon get the picture.

So, what was needed was something much more powerful and productive, that could cope with the Scottish terrain, whilst delivering the production and economy that would be required to make it viable in the commercial marketplace, so in November 2020 we bought the RGL mulching business, the machines and ancillary equipment and formed a new company, RGL Forestry. A new partnership was also forged where RGL Forestry would continue the mulching work and move into the new frontier of site restoration and stump processing and RGL Plant would stay with Bob and Graeme and continue to carry on with the engineering side of the business. The RGL machines run between plus 400hp, right up to approaching 700hp. So, with the mulching kit still available for work if required, we set about converting the smallest of the custom RGL tracked bases to run an auger of a new and unique design.

The precise engineering details remain private, but our new design auger is designed to easily cope with the largest of stumps and has well over 400hp powering it. If you’re going to chop up stumps, you need lots of horsepower and vast amounts of torque and this all needs to be on a carrier that won’t fall to bits, as the strain on the base machine has to be seen to be believed. We knew that mulching was hard on the base unit, but this is another level entirely. Try holding the chuck of a domestic drill when it starts up and you will understand.

So, what did we build? The new RGL auger system utilises a 27 ton tracked excavator-based carrier that exerts only 3psi on 1m wide tracks, whilst still maintaining a 1.1m wide transport width. It can also be equipped with 1.8m wide pads for extreme soft sites. It has an auger drive that produces enormous amounts of torque and an auger bit that will withstand very rocky and abrasive ground conditions, as well as embedded rocks inside the stumps themselves. It is also productive. On the recent trial site at Allandale, it fragmented/planed 1160 Sitka stumps of all sizes right out in just under 18 hours. The upper site was typical boulder and abrasive mineral soil, whilst the lower site was 2 to 3m deep peat. Trees were presented on ploughed furrows and ranged from 150mm diameter to 3500mm diameter root plates, with harvester-cut high stumps and manually-felled edge trees, all just above the buttresses.

The stump planings are about 30mm thick and are “peeled” so as to open up the fibres to encourage the decomposition and subsequent release of the nutrients contained within. Our project aims are to not only remove the stumps and reduce the weevil habitat, but also to release the nutrient contained in the stumps. Other benefits appear to be as follows: Hard pan and ploughing broken up. Improved drainage.

The site is largely flattened and will make mounding more efficient or even open up the possibility of using a continuous mounder and automatic planter. Overall establishment and ongoing maintenance costs should be reduced, but only time will tell. It’s very early days and no reliable data exists for many of the project outcomes, but early indications and opinions from industry professionals who have visited the trial sites are encouraging to say the least. We are keen to work with as many stakeholders as are interested and would welcome any input from wherever it comes.

The future? I think this works and I have put a large amount of cash where my mouth is. The next machine will be more powerful and productive by a factor, and we are standing by to convert the Kingwell powerpacks as well as the RGL ones to make an initial fleet of five machines with a combined horsepower of about 2500hp, so availability and production over larger site areas shouldn’t be an issue.

Like what you see? Want to get involved? So, get in touch and get on board. We look forward to hearing from you.
www.kingwell-holdings.co.uk