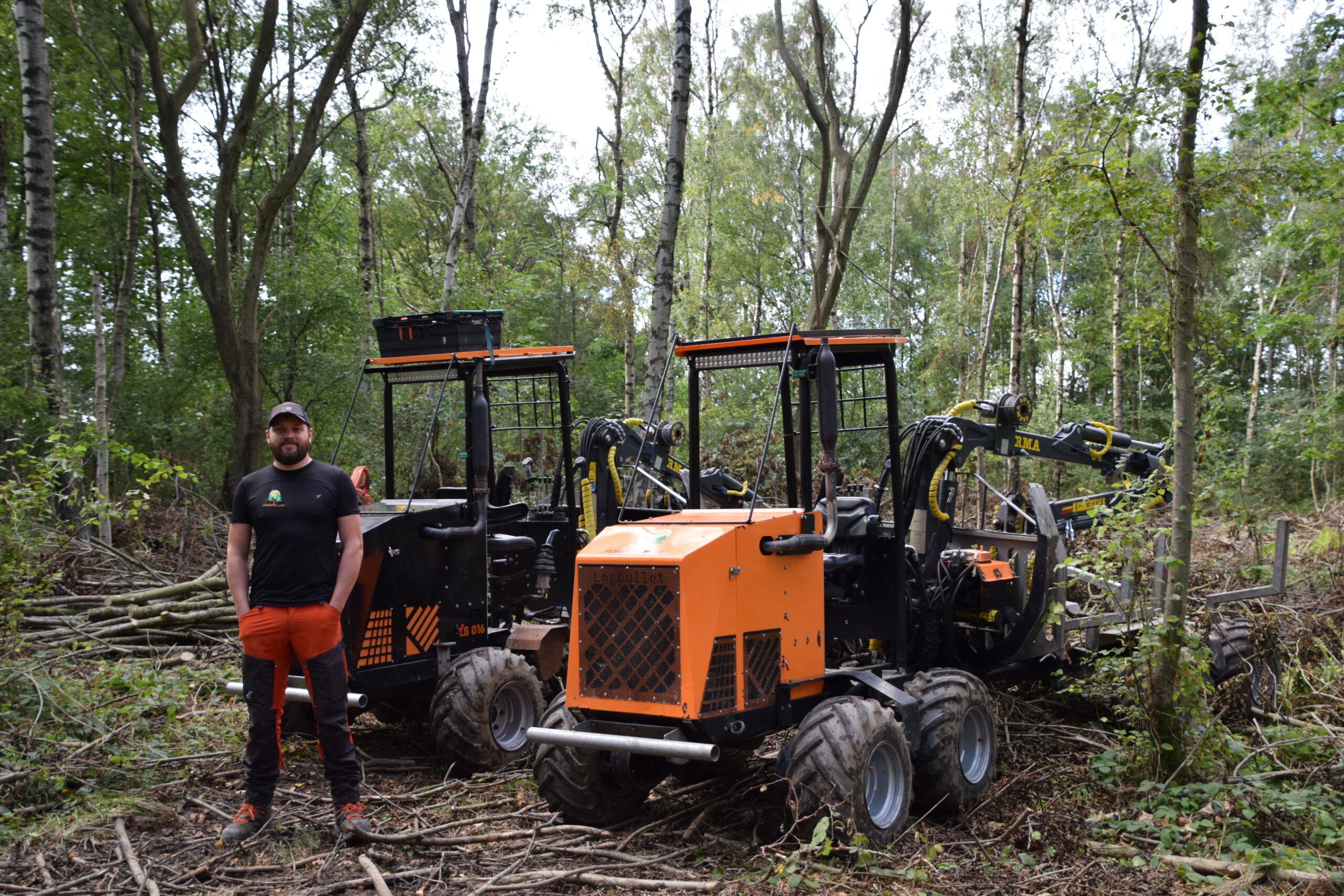 The Logbullet is a Finnish mini forwarder made by the company Porttivouri Oy, which is owned by Pekka Syvanen, who was awarded his Masters degree in engineering by Helsinki University in 2004. It is an 8WD hydrostatically-driven forwarder which is 5m long, 1.55m wide and weighs 1,700kg. It has a payload of 1,700kg and will travel at speeds of up to 5km/hr.

While thinning timber in his own forest in 2011 with an ATV and forwarder trailer, Pekka realised that, although it was a low-impact machine, reversing was very difficult on the uneven forestry ground. He decided that he would design and build a cost-effective, low-impact machine in his spare time. There was a lot of trial and error involved in the process, but the first ever Logbullet left his workshop in 2015. The Logbullets have since proven popular, with 66 units made to date. Production for the next 12 months will see a further 20 machines manufactured.

So far, sales have been to Finland, Sweden, the Czech Republic, France, Estonia, Latvia, Germany, Switzerland, the UK, Canada, and the US, while one of the Logbullets on order will be sold in Ireland. The waiting time on a new Logbullet is approximately three to four months from order to delivery.

We visited Mike on the Dixons Plantation not far from Stokesly – a young mixed hardwood forest consisting of mainly Oak, Birch and Ash. Mike was removing the Ash trees before they succumbed to Ash Dieback (“Hymenoscyphus fraxineus”).

Low-impact smaller-scale forestry, similar to what Mike was carrying out, is a specialised method of timber extraction which attracts far less attention on social media compared to large-scale harvesting operations, and so I was interested to find out how Mike first heard about it and why he decided to go down this route.

“I come from a farming background and grew up operating agricultural machinery which I loved; in 2012 I embarked on a career in tree surgery and forestry and spent eight years working as a self-employed groundsman.”

“In 2018 I had an operation on my shoulder and realised I needed a change within the industry where the work I was carrying out would have a lesser impact on my body. I decided to carry out some research on low-impact forestry extraction equipment as I could see a niche in the market for thinning smaller stands of timber without causing disturbance to the ground.”

“Thinning out small woodlands and shelter belts yields limited volumes of timber and is financially uneconomical for contractors with larger equipment to consider. I could see this working for me by using smaller extraction equipment which could be transported legally and cheaply on a trailer towed behind my 4WD.”

In 2018, after looking at the many options for small-scale, low-impact forwarders, Mike discovered Jonathan Robinson from Devon on the social media platform Arbtalk. Jonathan had purchased the first Logbullet in the UK, and after reading his blog posts and messaging backwards and forwards, Mike decided to visit him in January so that he could see the Logbullet working for himself. The Logbullet ticked all the boxes for Mike, and as there were no UK distributors, Mike contacted Pekka at Porttivouri Oy to order the Logbullet forwarder, which was delivered in April 2019.

Over two years on and Mike is still convinced he made the right decision, so much so that he is the only contractor in the world to own two Logbullets.

The second Logbullet he purchased second-hand from Jonathan Robinson, as he was upgrading to a slightly larger capacity low-impact forwarder. Jonathan offered Mike first refusal, and although it was a substantial investment, a back-up machine was too good an opportunity to pass up as, up until that point, he had never seen a used Logbullet available for sale.

I caught up with Mike in late September when he was just over half way through the job; approximately 200 tonnes was being removed and Mike was extracting 3m lengths of Ash which were being felled, x-cut and stacked by his two self-employed chainsaw operators. He subcontracts the felling to between two and four chainsaw operators depending on extraction distance, species and size of the trees that are being thinned. He still likes to keep his hand in with felling and fills in whenever needed.

I asked Mike if he would eventually go down the mechanised harvesting route: “Our system works well with the hand cutters and lightweight forwarder; fully loaded it is just over three tonnes with the weight distributed evenly over the eight wheels. Finding an uncomplicated and reliable harvester with a similarly light footprint is very difficult.”

“The Logbullet has a simple, uncomplicated design with many of the components ‘off the shelf’; any other parts which are manufactured by Porttivouri Oy arrive from Finland within 48 hours. I was a little concerned over spare parts to begin with, as there was no UK distributor, but Pekka has been fantastic, really helpful on the phone with prompt despatching of any parts I have needed.”

I got the chance to have a good look around both Logbullets and was impressed with the build quality and thought that had gone into them. Steering and forward and reverse drive are on a single four-way joystick on the right hand side of the rotating seat and the two lever crane controls are mechanical for main lift, dipper slew and rotator, with four electric buttons on each joystick for stabilising legs up and down, as well as extension and grapple operation.

There is a useful radio-controlled winch mounted on the side of the main boom of the Farma Crane with 30m of wire rope and 600kg of pulling power. This is ideal for gathering in trees on a steep bank or awkward/very wet areas that could cause problems. Mike opted for the larger Farma 4,2 G2 crane and 0.21 grapple rather than the standard 3,8 G2 crane; the larger crane has almost half a metre more reach with the addition of the dipper extension, which is useful when working in thinnings.

Ground clearance is generous for a small machine at 40cm, with the under body smooth so that it will slide over protruding obstacles without hanking.

“The secret is having good cutters” admitted Mike, before continuing by stating that “keeping stumps low and uncovering any hidden obstacles so I can see them is a great help in minimising damage to the forwarder and getting good steady production.”

Mike has added a few bits of extra protection, including a headboard extension for loading the bunk slightly higher when wood is light and some branch deflectors on the hydraulic motors on each bogie to protect the hydraulic hoses and fittings. He has added fire extinguishers to the forwarders, as well as front bumper bars, chainsaw holders and front branch deflectors running from the roof at an angle to the front of the bonnet. One other handy addition is the strapped on roof box for storing tools and bits and pieces; machines seldom break down at the roadside next to everything you need to repair them ☺.

Each bogie has its own hydraulic motor with a sprocket and chain for drive; these have proved very reliable and trouble-free, when the chains are kept correctly tensioned. Mike has band tracks which can be fitted for even lower ground pressure when working in wet swampy ground conditions.

I got the chance to try the Logbullet myself and found the crane smooth and precise, with the crane levers easy to use. There are no windows, and instead just a tube on each corner with a plastic roof attached, meaning that vision is excellent; Mike has added LED lighting blocks to the back and front for extra illumination on dull days when dealing with tightly-spaced crops, and on shorter winter days.

The Logbullet is powered by a Kubota V1505 four-cylinder diesel 25hp engine which is smooth and quiet, works all the hydraulic functions, and drives at very low revs.

Mike averages around 18-20 tonnes per day, although one day he managed an impressive 36 tonnes on a relatively short extraction distance. Fuel consumption is incredible with the Logbullet, using just 10-12 litres of diesel per day, roughly equating to ½ litre per tonne. This is a light, well-balanced mini forwarder with responsive steering, making it ideal for manoeuvring in tightly-spaced crops; it is so light that it hardly left a mark on the ground. Having used the original Logbullet for over 1,500 hours, I was interested to find out if there had been any recurring problems.

“I have replaced two centre joints and a bogie bearing but this was down to my own naivety; I was loading it with too much timber thinking that this would improve production, but in reality it had a completely detrimental effect. I soon realised that carrying just over a tonne on each load was the way forward; little and often works brilliantly and I have had no issues with reliability since.”

“Changing the centre joint isn’t a major operation on the Logbullet with it being small and light; losing the skin on my knuckles due to the close confinement of the nuts and bolts was the worst part of it” laughed Mike. “It took two days for the centre joint to arrive from Finland and just a few hours’ labour to replace it, so there was minimal disruption to production.”

Word soon spread of his low-impact approach to harvesting timber and the ability this gives working in densely-planted areas that would previously have been almost impossible or uneconomical to extract from, and he has found his two Logbullets and felling squad very much in demand. About half of his harvesting work is for the Zetland Estate, and Mike has a great working relationship with the forester Shaun Purkiss-McEndoo. The rest of the time he works for Raby and Croft Estates, Stockton Woodland Trust and smaller privately-owned woodlands. Mike lives in Richmond and will travel 90 minutes in all directions from his home to work; this includes County Durham and Cumbria, as well as North, South and East Yorkshire.

Mike had a timber lorry coming in the next day, so I followed him in and out for a few loads and the forwarder was not leaving a mark on the ground; it was a little over 150m extraction distance from the felling area to the roadside (just over half way through the job) and he was averaging over three loads an hour. The Logbullet was very stable when loading and travelling, and was rapid across the ground; it was reasonably firm soil and fairly flat. All the stumps had been cut nice and low and brash had been chopped up by the cutters to prevent any hindrance as they went along.

Mike works to a very high standard and the overall forest’s health will improve greatly from being properly managed; it is aesthetically pleasing to see an airy, well-managed woodland that people can enjoy rather than looking at a dense overgrown jungle. Forests need to be thinned to increase the value of the remaining crop and the low impact system Mike is using, with minimal transport costs, allows them to get a return on their timber to pay for having the work carried out. Previously, many of these areas would have been either cut to waste at a substantial loss, or left to fend for themselves as overgrown scrubland.