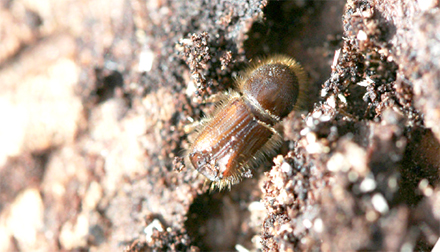 Woodland managers, landowners and the forestry industry are today being urged to increase their vigilance to the risk of the tree pest Ips typographus – also known as the larger eight-toothed European spruce bark beetle – following new findings of the insect by the Forestry Commission on spruce trees in Kent, Surrey, East Sussex and West Sussex. The new findings were made following routine plant health surveillance activities carried out by the Forestry Commission.

A robust management programme is in place to manage the outbreak sites and prevent potential spread of the pest, in line with the eradication action taken to manage outbreaks of Ips typographus found in 2021. To combat further potential spread, an extension to the existing demarcated area is being introduced to cover parts of Hampshire. Within the demarcated area, the movement of susceptible tree material such as spruce wood, bark and branches is restricted.

The south-east of England in particular is vulnerable to the arrival of the eight-toothed spruce bark beetle because it can naturally be blown over from Europe. An extensive network of pheromone traps has been positioned across the south-east to monitor for potential incursions of the pest from the continent and to identify suspect sites. In the long-term, the Forestry Commission are encouraging landowners in the affected regions to remove stressed or weakened spruce and replant with other species to limit potential spread of Ips typographus.

are retained within the landscape.”

Nicola Spence, the UK’s Chief Plant Health Officer, said: “The eight-toothed spruce bark beetle poses no threat to human health, but can have a serious impact on spruce tree species and the forestry industry.

“We are taking swift and robust action to limit the spread of the outbreaks as part of our well-established biosecurity protocol used for tree pests and diseases. Any sightings should be reported to the Forestry Commission via its TreeAlert online portal.”

Grants are available through the Tree Health Pilot to support woodland managers with spruce trees affected by, or at risk of, the eight-toothed spruce bark beetle. The grants can pay back the costs of felling trees; protective measures like fencing and netting; installing infrastructure and access aids, such as temporary road surfaces, to improve access to trees; and restocking and capital items to replace the trees with different species that are more likely to withstand pests, diseases and climate change.

A notice extending the existing demarcated area will come into force on Wednesday 20 July 2022.