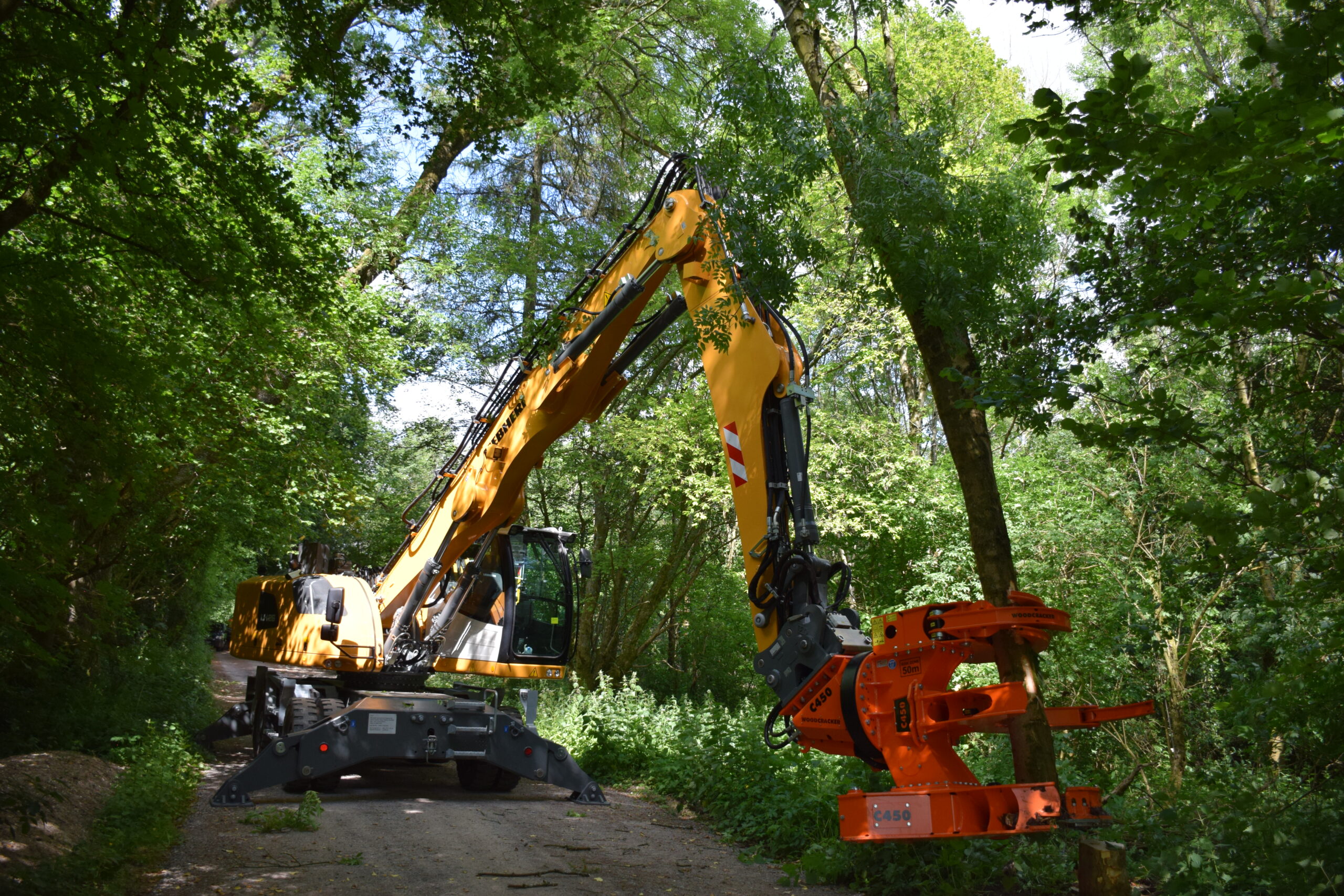 Tackling Ash Dieback with Westtech Woodcracker Tree Shears – Hymenoscyphus fraxineas – Ash Dieback – is a fungal disease causing leaf loss and crown dieback in affected ash trees and is usually fatal. It has caused widespread damage across Europe and was first confirmed in the UK in 2012. 80% of Wales, 68% of England, 32% of Northern Ireland and 20% of Scotland affected. Dead and dying ash trees are very fragile and industry guidelines state that felling the trees with chainsaws should be avoided where possible. Tree shears offer an effective and safe method of dealing with diseased trees.

Marshall Agricultural Engineering hosted a three day demonstration of Westtech’s Tree Shears and biomass equipment near Chichester. The Tree Shears carried out a roadside clearance of Ash trees which had been infected by Hymenoscyphus fraxineus. The main road had been closed with a diversion put in place during this process. Simon Brent, of Fountains Forestry, managed the site. The standing timber had been purchased by Euroforest and was being marketed by their forester Chris Watts. It was an excellent site to hold a demonstration as spectators could see the machines working from a safe distance while standing on the road. As an added bonus there was a telephone wire running parallel to the road and the infected Ash trees, meaning the trees would have to be sectioned and removed from above and below the cable.

Marcus Reinhold demonstrates for Westtech at various events and shows around Europe. He started the roadside clearance by operating a new Liebherr LH 26 Rubber Duck Excavator with hi lift cabin fitted with a C450 Woodcracker®. The LH 26 M Industry material handling machine is equipped with a sturdy undercarriage which is wider compared with the LH 24 M. This results in higher load capacities and a longer reach, while at the same time achieving a very high level of stability. With the latest engine and hydraulic technology, developed in-house by Liebherr, the primary focus is on fuel efficiency while simultaneously enhancing material handling performance. The C450 is the second largest of the Tree Shears; capable of cutting up to 50cm diameter in softwoods and 45cm in hardwoods, it also has an endless rotator.

Marcus felled the larger Ash trees in three or four sections as there is a good market for all the produce. The smaller trees were felled in one where possible and would be chipped whole at a later date. The medium sized and poorer quality trees would be used for biomass and firewood, with the larger, straight and best quality timber destined for sawmilling (Vietnam is a good market for quality Ash logs and some could possibly find themselves going there).

Having used Westtech Equipment for many years, Marcus was able to show how effective the C450 is at removing trees quickly and safely.
He was section felling the crowns of the larger trees and was able to cut them just below the telephone line and lift lift them safely up and over it; they were then placed on the banking on the opposite side of the road to be processed later. Using the four hydraulic stability legs during harvesting kept the Liebherr rock solid even at full reach, which increases operator comfort and allows longer working hours. This is essential in situations where time is an important factor, for instance road closures.

Once he was left with the main stem, it was being cut from the top to the bottom at roughly 3m lengths and stacked for collection as biomass or firewood. An average tree of around one to two tonnes took no more than three minutes from start to finish.

Marcus cleared a quite a few metres of roadside trees before making way for Warren Wright, who showcased the Merlo Roto 40.30 MCSS TeleHandler fitted with a Westtech CS580 Smart Woodcracker®. The telehandler had exceptional reach and power for working in the crowns of large trees – it can extend upwards to over 29m and forward to over 25m. The operator’s cabin tilts, meaning you are looking straight at your work zone and not craning your neck all day. The Merlo is ideal for roadside use and can travel at speeds of 40km/hr. The Westtech CS 580 Smart also includes a hydraulic chainsaw instead of shears and has been specifically designed for attaching onto a telehandler. The compact design reduces the weight without reducing the strength, which allows the telehandler to have more power for dealing with larger limbs. The Woodcracker® had a strong tilting torque with a high gripping force, while the maximum cut of the chainsaw is 580mm and the chain is lubricated by grease.

The Merlo/CS580 Smart combination was impressive to watch as the extended stability jacks kept the Merlo steady and secure while at high altitudes and it was highly efficient, safe and controllable at dealing with the awkward limbs above and below the telephone cable.

In addition to the roadside demo Gavin Richardson was harvesting the diseased Ash trees on the forest side with a tracked Hyundai 220LC excavator, which was fitted with another Westtech C450 Woodcracker®. Gavin was impressive to watch as he is an extremely gifted operator and it is clear he is used to operating his Woodcracker® safely and efficiently.

This was an excellent demo with a fantastic turnout, highlighting the potential of the quality equipment from Westtech sold by Allan Marshall. The Westtech Woodcrackers® are an excellent solution for dealing with trees on roadsides, canal/riverbanks, railways, near buildings and footpaths that need to be removed quickly, safely and efficiently.

One thought on “Tackling Ash Dieback”